Descendants: The Royal Wedding – a Royal End to the Story? 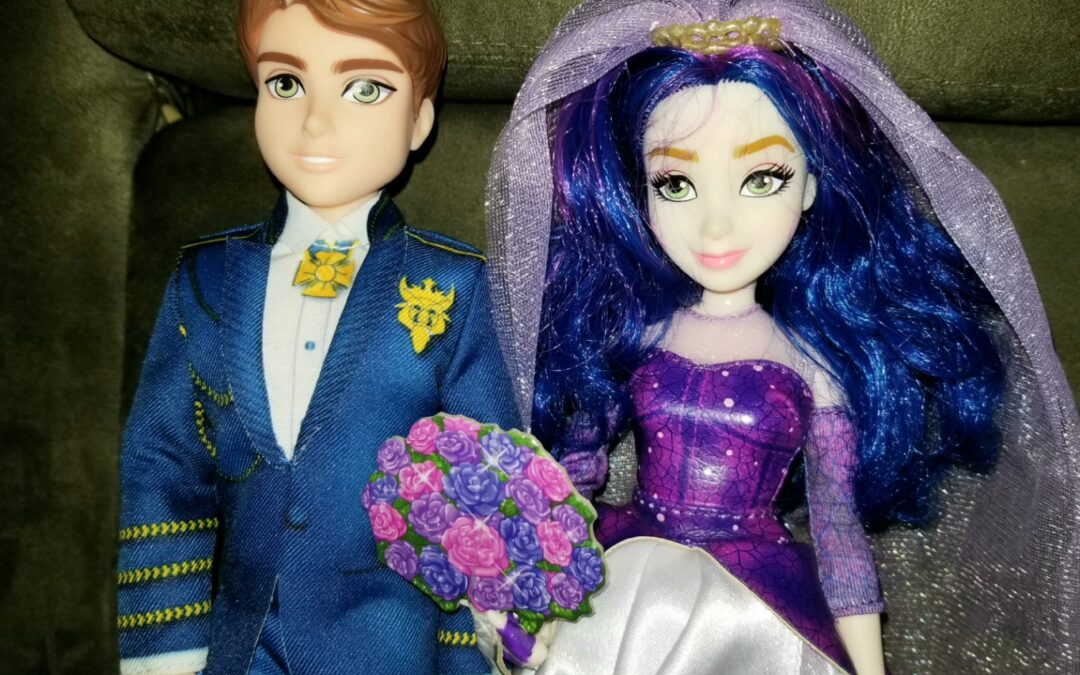 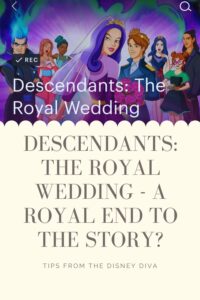 Although my kids were only babies when the Descendants storyline first began, thanks to having access to all 3 movies on Disney+, they have become huge fans. They both dressed up as Descendants characters for Halloween last year and had a Descendants themed birthday party. 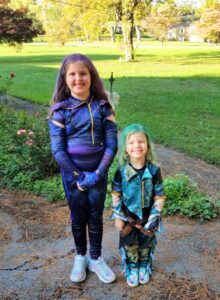 If you’re not familiar with the Descendants, it’s a story revolving around the kids of Disney Villains. The main characters are Mal (Maleficent’s daughter), Evie (Evil Queen’s daughter), Carlos (Cruella de Vil’s son) and Jay (Jafar’s son). All of the villains are trapped on the isle of the lost by Beast when he becomes King of The United States of Auradon. His son, Ben decides to invite 4 of the VKs (villains’ kids) to Auradon to give them a chance to live a life of good instead of evil. There are 3 feature length movies full of adventure, romance, comedy as the 4 VKs learn to navigate a world where wicked isn’t a way of life. I won’t spoil most of the story line, in case you want to watch it for yourself. The 3rd movie ends with the promise of a wedding for Ben and Mal. Sadly Cameron Boyce, the actor who played Carlos, died shortly before the 3rd movie was released. It seemed for a long time like the story arc would end with a cliffhanger as Disney and the other actors and actresses from the film didn’t want to continue the story without Cameron. 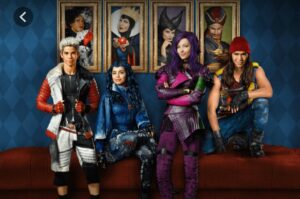 When we were shopping for Christmas presents last year, we noticed that Disney had released some Descendants 3 merchandise labeled the Royal Wedding. My kids had to have it, of course. Thanks to these dolls, Ben and Mal have been married countless times over the past eight months in our house in a variety of ways but always ending with Happily Ever After. I thought this was a nice way to allow kids to write the ending for themselves since it didn’t seem like Disney was going to officially do so. 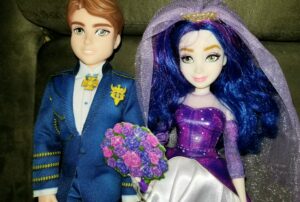 In early March of this year, Disney announced that they would, in fact, be giving us our happy ending with Descendants: The Royal Wedding. Instead of being live action like the movies are, this would be animated. It was also billed as a special rather than a movie, but other than those details, very little information was given on what Descendants fans should expect. From the moment my kids saw the first teaser, they have talked of little else. My oldest would regularly ask me how long it would be until The Royal Wedding aired. It was like watching fans of Prince William and Kate wait for the real royal wedding back in 2011. Finally, on August 13, the wait was over. 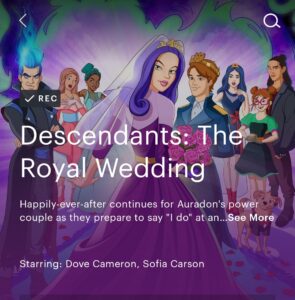 I knew my kids would watch to watch The Royal Wedding over and over so I set my DVR a few days ahead. I was surprised to see that the special was only 22 minutes long. We missed the original airing but were able to sit down and catch a repeat airing on Disney Channel. I was a bit surprised at the animation style Disney went with- it looked much more hand drawn than the animation style they used for Descendants: Wicked World, which was an animated series than ran for 2 seasons after the release of the first Descendants movie. Most of our favorite characters from the first 3 movies were featured, voiced by the actor or actress who played them in real life. I thought Disney did a nice job of addressing Carlos’ absence tastefully without overpowering the storyline of Ben and Mal’s impending nuptials. There was also a sweet tribute to Cameron Boyce at the end of the show. I do think that Disney rushed the storyline, however. Yes, we got the drama, romance, comedy, and suspense we’ve come to expect whenever the VKs are around, but to me it felt more like a rush to get the story over than a thoughtfully developed final chapter. My kids enjoyed the show, although my eldest, like myself, was disappointed that it was over so fast.

Despite it’s brevity, Descendants fans did get their ending as well as a surprise at the end. The last scene of Descendants: The Royal Wedding features some white roses, some of which are painted red, and then ends with the camera panning down a rabbit hole. Surely this allusion to Alice in Wonderland means Disney plans to continue the Descendants series with new characters and stories to fall in love with. I personally hope they go back to telling those stories in a feature length format rather than the short story format they used for The Royal Wedding and Wicked World.

Did your family watch Descendants: The Royal Wedding? Let me know your thoughts about it.