Dining With the Dark Side: Sci-Fi Theater Breakfast During Star Wars Weekends 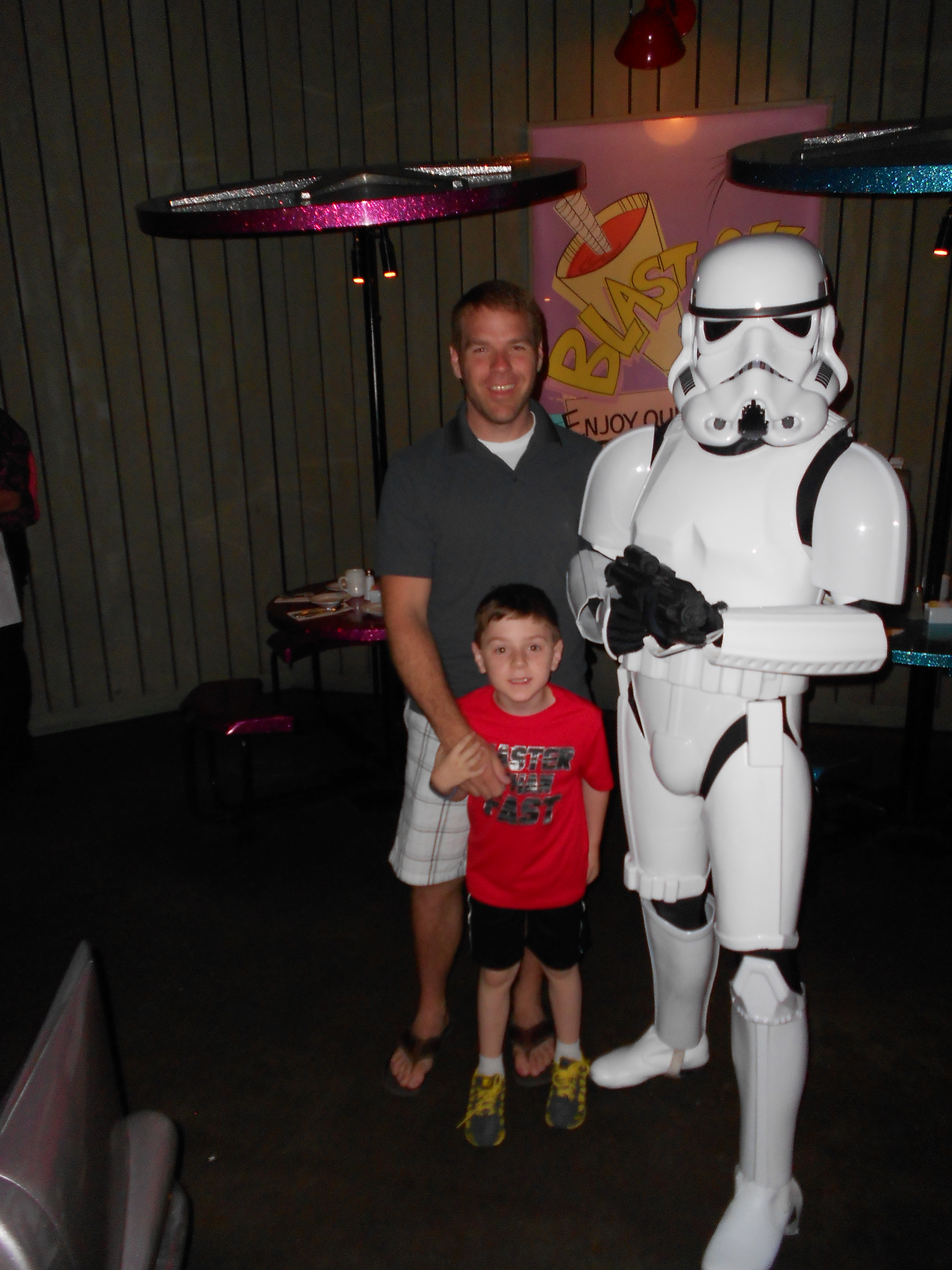 Last month, as a reward for an amazing school year, we surprised our son Bryce with a trip to Disney World.  One of the things that we were the most excited about was getting to attend Star Wars Weekends.  My husband Cory and I are both HUGE Star Wars nerds, so combining two loves—Disney and Star Wars—was a dream come true for both of us.  Star Wars weekend runs from early May to mid-June, and our trip fell right in the middle. We couldn’t wait!

An even bigger surprise was that I booked a special character breakfast for Cory and Bryce.  As part of Star Wars Weekends, Disney recently added two new character meals.  One of the meals is a lunch or dinner at Hollywood & Vine (buffet) where the traditional Disney characters like Mickey, Minnie, Goofy, etc. were dressed like the Star Wars characters.  The other is a breakfast in the Sci-Fi Dine-In Theater Restaurant where you get the meet the Dark Side.  My son loves breakfast, so this is the one that I booked.  Since I wasn’t attending, I sent him with instructions to take good notes and pictures for the Diva site.  Bryce, as you may have seen from some of his video posts of the Facebook page, is a Devo in training, so he was more than happy to oblige.  He did great on getting me information, but not so great on pictures.  In fact, you can click here, and here him tell you all about it the meal. 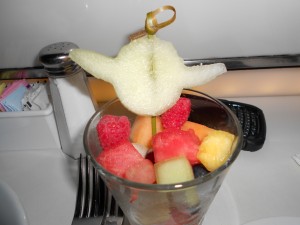 When they arrived, they were first taken to have their pictures made with Darth Vader and Boba Fett.  Then, as is always the case, they were seated in an old Cadillac facing the movie screen.  Typically, they show sci-fi clips on the movie screen, but for this breakfast they showed Star Wars clips instead.  They were given their menus which contained various Star Wars-themed items.  Click here to see the full menu.  They started with fruit, which had a honeydew “little green guy,” or as those besides Bryce call him Yoda, on top of it.  Touches like this tiny Yoda are what never cease to amaze me about Disney World.  The portions were not large, which was a bit surprising especially given the price of the meal.  But, both husband and son said that the food was excellent.

As they were eating various characters like Greedo, Storm Troopers and Jawas walked to the tables and had their pictures made with the diners. I was a little worried that since it was basically breakfast with the “bad guys” of Star Wars that my son might be a little freaked out, especially with Darth Vader and the Storm Troopers.  But, this was not the case at all.  As with all Disney characters, they  ALWAYS stay in character, so they could be a little scary at times when I saw them, but Bryce said that he was not scared of them at all at the breakfast. 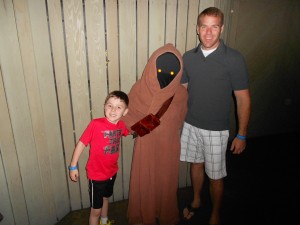 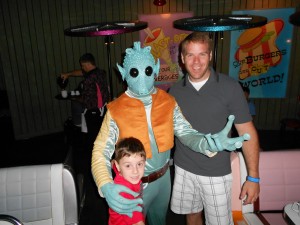 I will warn you, the breakfast is very pricey.  If you are on the dining plan, it takes two of your table service meals.  The total cost of the meal for Cory and Bryce was right at $100.  It would have been a little less, but my son can seriously eat, so they had to order an extra portion of  eggs. 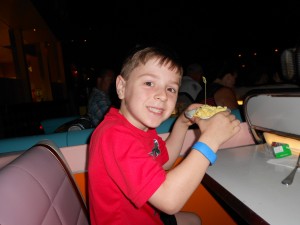 My husband and I are both very frugal, but I asked Cory after if it was over if it was worth it, and he immediately responded, “Worth every penny and then some.”  He said that Bryce absolutely loved it, and he would pay it again in a second.  Cory’s only regret was that he didn’t force (pun intended) me to go with them.

The entire day at Hollywood Studios was so wonderful and magical, but the breakfast was definitely one of the highlights.  Below are some tips on the entire Star Wars Weekend that I thought you might find helpful. 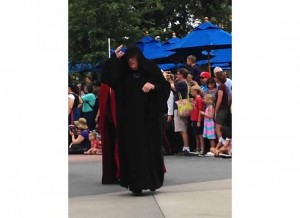 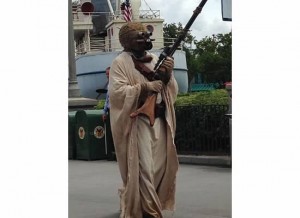 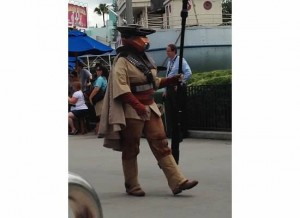 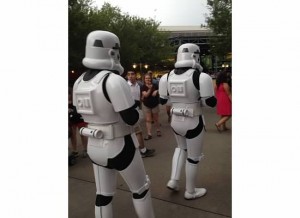 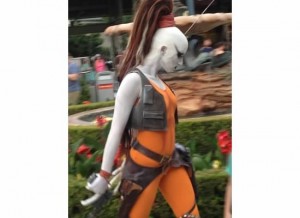 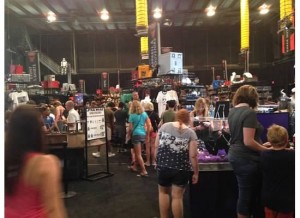 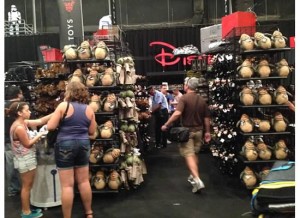 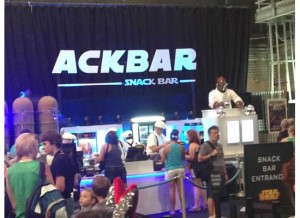 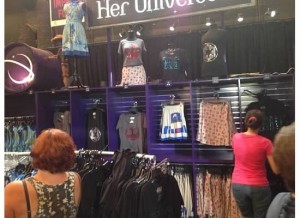 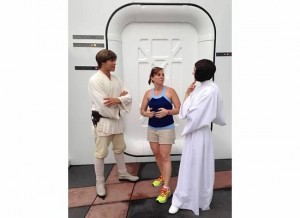 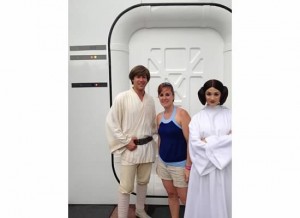 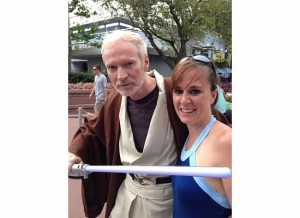