How does a Disney Diva keep the Disney Magic going even when there is no Disney vacation in sight? I plan Disney themed parties for my kids, of course! My Disney baby recently turned two and lucky for me, I have brainwashed, passed down my love for Disney to him! There are so many great Disney themes, I wasn’t sure how we would choose one. I decided to ask Disney Baby and with no hesitation, his answer was Buzz. So, Buzz Lightyear it would be, now, where to start? 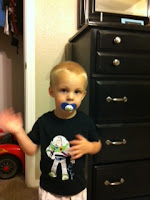 First of all, I knew I wanted him to have a special shirt to remember his special day. I contacted Jen over at Stitches N Bows and she made this awesome shirt just for my Disney Baby.

Next I hit the Internet and Pinterest for some research (have y’all been on Pinterest…make sure you follow Tips From the Disney Diva there too). Holy Cow! There was tons to look at and so many really awesome ideas. There were quite a few that I wanted to use and a few that I’m sure my husband would have killed me if I would have tried (I don’t know why he wouldn’t want to dress up like Buzz).

I decided to start of with the invitations. There were some really cool pre-made invites out there that you can order or print yourself. I chose the DIY approach. (Now, I’m kicking myself because this is the one thing I did not get a picture of). I used my color theme of lime green, purple, and navy blue for paper choices and found a Buzz Lightyear and space ship stamp at Hobby Lobby. After the invites were sent out, the fun part was about to begin…decorations!

I wanted to keep the decorations centralized to a few rooms to where I wanted the party contained and the backyard. I started by creating an Etch-a-Sketch for a welcome sign on the front door. I used foam core board cut in half and then covered it in red craft paper. I then used white construction paper for the screen and for the knobs. I used a silver Sharpie to spell out a message inviting everyone inside. I love the way it turned out!

After walking through the front door, Buzz and Woody were waiting on the table ready to greet guests. I found great printables here that look just like a kid’s drawing. When the older Disney Brothers saw this, they jumped in to help with decorations and made their own drawings. 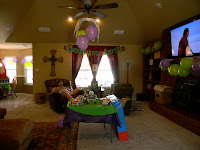 Straight through the entry way and into the living room, there was another Buzz ready to scope out all of the new toys that the guests were dropping off at his table. He was also standing precariously under The Claw (made from thick foam core board and covered in aluminum foil).

If you look around the room, you can find a few other Toy Story friends (I have the best friends that let me borrow all of the toys that they had). Instead of using streamers or garland, I found the balloon garland through Pinterest and just used balloons that matched my color theme. 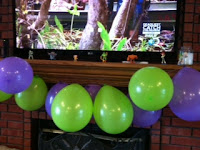 Next I decorated the dining room where all the food would be. I put up more balloons and more of the Disney Brothers’ art work. I was this awesome idea through Pinterest to have the green army men swinging into action over the party space. I tied twine to the air vents and curtain rods and hot glued my army men so they were repelling to my chandelier.

The table was really my focus of the party decorations, so I really wanted to pull out all the stops here. In addition to the army men, I tied silver foil stars (bought at Walmart in the party section) and some Buzz Lightyear gliders that I found here. I wanted some sort of backdrop for the table, so I bought a black trifold board at Hobby Lobby and the Disney Brothers put gold star stickers all over it…instant outer space! With a black table cloth on, we were ready for the food and a few finishing touches. 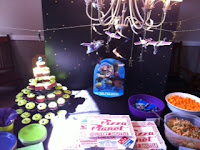 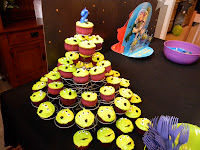 I wanted to keep the food really kid friendly and pay homage to the Toy Story movies. Pizza was the main dish. I printed out Pizza Planet logos that I found on Google Images and attached them to the top of the pizza boxes. I made ‘Slinky’ pasta salad with veggies and set out Uncle Al’s favorite cheese balls and some Toy Story fruit snacks (I said kid friendly, not healthy). To finish it all off, we had green alien cupcakes.

I kept drinks in the kitchen and kept it pretty simple: waters and Green Galactic Punch (just green Hawaiian Punch) in green cups that the Disney Brothers decorated with Toy Story stickers. There were also more repelling army men in the kitchen keeping an eye on everyone.

I found these party hats and thought they were too cute to pass up. I added more foil star streamers, balloon garland, and made a crane machine backdrop for the table (just a red tri-fold board cut into a rocket shape). 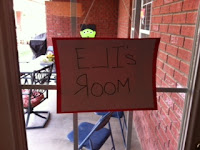 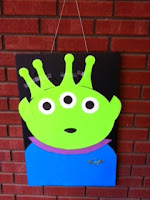 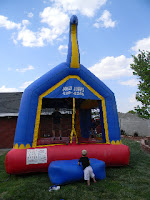 On the back door I made a sign leading the kids to their play space. I also rented a Jolly Jump from a local company (we went with a dinosaur just for Rex).

They kids colored Buzz Lightyear coloring pages and played pin the antenna on the alien. This may be my favorite project! I used black, green, and blue poster board to make my game. I drew and cut out all of my pieces, glued them to the board and added a few small details. 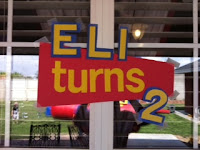 Finally, I made a birthday sign to look like the Toy Story title.
I kept goody bags simple and just bought a kit that had everything that I needed in one package. There were some other really great goody bag ideas here and here that I was leaning towards too. For the very little kids, I found Toy Story sippy cups.

Overall, I am really pleased with everything and how it all turned out. There are more ideas that I would have loved to try, but I will have to save them for another party. Most importantly, Disney Baby had a blast!

Have your kids every had a Disney themed party? Where do you find your inspiration?