Disney Comics You Can Get Right Now 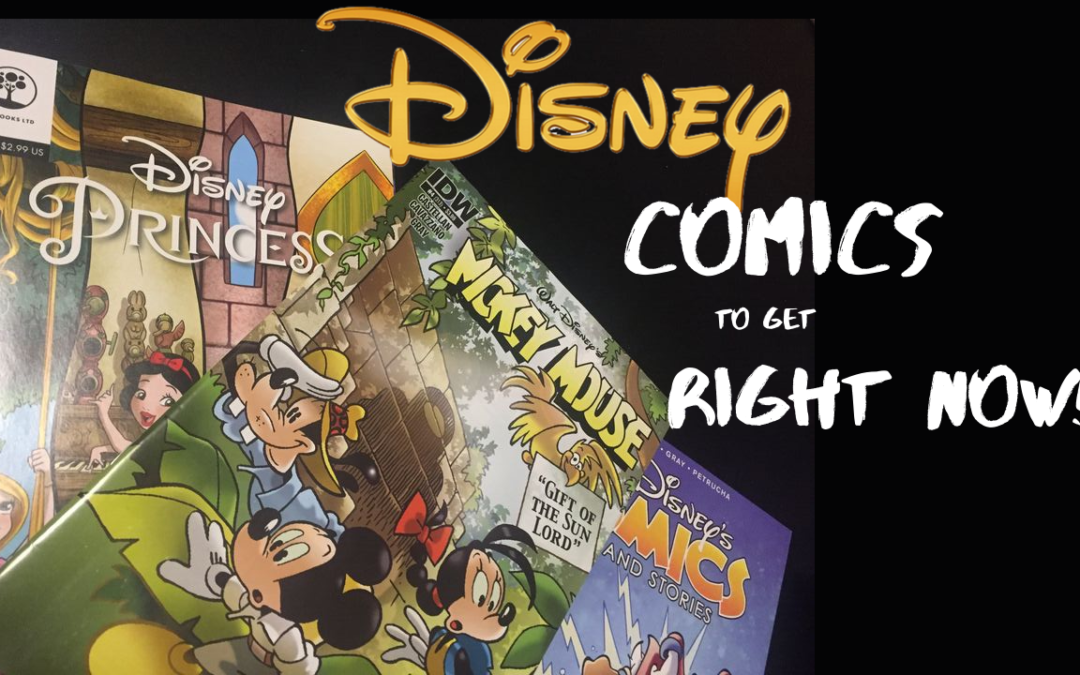 When I gave the last tips for comics here, I did this thing where I cherry-picked comics based on quality and variety in selection. I love that article and stand by it and encourage you to search places like Amazon, Thrift books, and your local comic shop to find them. But I also realize that as time keeps moving forward, a lot of those books get harder to find and a bit more expensive too.

So I thought I’d give you some more tips- if you’re just starting to get into Disney comics, where should you start? To investigate, I went into my local comic shop and picked 3 of the most un-assuming books. None of these are going to break the bank and the oldest one is from 2015 so they’re relatively new and VERY easy to find. So let’s talk about that! 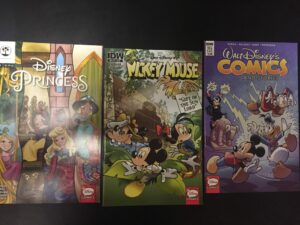 I picked up 3 comics to share with you, pulling from a range of Disney based properties. Now let’s see how good they are!

I got these three books based on getting a variety of content, one Mickey Mouse, one Princess, and one “Disney Comics and Stories” which is a combination sampler book featuring several characters. Let’s go through each one and I’ll give you a rundown and what to expect from other issues within the series. The first thing to note is that all of these books have their ads in the back cover, which means that they have a lot fewer ads altogether and a lot more comic for your dollars. Something an avid reader like myself really appreciates. Anyway, let’s get started already!

Bonus Tip: There are some popular books that, for some reason, my local comic shop did not have. These are the books based on the new DuckTales and Tangled: The Series. Chances are, if you like the TV series then you will like the books, though they aren’t reviewed here.

First thing, I had to turn the book sideways. That’s weird and abnormal for comics and I kind of hate it. it doesn’t feel natural. Other than that though— 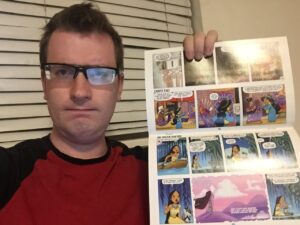 This series is a collection of short stories that take place between 3 panels (like a newspaper comic) and 4 pages long. Each features a different princess in a different situation. For instance, in this book Cinderella found herself giving etiquette lessons to the King and Duke because they can’t get along in meetings. Tiana set up a speed-dating scenario for Lottie, and Aurora and Phillip go for a walk in the woods and reveals how clumsy Phillip the Dragon Slayer actually is.

It’s fun to see these characters get some more love. A lot of them have only had their one movie appearance (well, there’s also Wreck it Ralph, but does that really count?) but there’s a lot of potential for more stories. I’m glad this book exists. Plus, it’s written by Amy Mebberson who writes the “Pocket Princess” fan comics. Look her up. She’s amazing.

Bonus Tip: unlike regular books, Comic Books can TOTALLY be judged by their cover. For Disney Princess, the characters on the cover will give you an idea of who is prominently featured (though all of them are in each book from what I can tell). If you’re looking for an action book, the cover will tell you. Comedy? Look at the cover. Don’t feel guilty about it! That’s how us professionals do it.

This one and the Mickey Mouse one later are actually reprints but I promise you haven’t really seen these before. Time for a history lesson:

America and Italy had very different comic scenes. America’s Disney comics were very “Toon Town” where Mickey and friends had very “slice of life” kind of adventures because that’s what’s popular here. Mortimer is flirting with Minnie, so Mickey steps in. That kind of thing. But there’s one notable exception and it’s the work of Carl Barks.

Carl Barks wrote Donald Duck and Scrooge McDuck comics for nearly three decades and created the adventure base that Ducktales branches from. He’s the reason Scrooge is “Tougher than the toughies and Smarter than the smarties” or that Donald is “One of the greatest adventurers of all time”. These books were VERY successful. I can’t stress that enough. And Italy decided that if Donald was going to go on adventures, finding treasure, avoiding boobie traps and encountering mages of the occult, then Mickey should too! 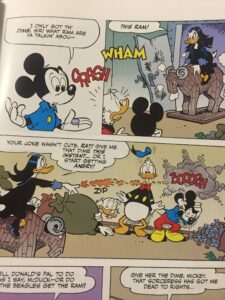 Ducktales has a very strict “No Mouse” rule The comics do not. This means we finally get to see the True Original against the most sinister of Disney Villains: Magica DeSpell!

The main story of this book was that Mickey and Donald are looking for a Stone Zodiac for Scrooge. This particular story is part 11 of 12 but it reads like a complete story so in this case, this isn’t a problem. in it, Scrooge insists he remembers a partner named Jake Marley and … (it is in this moment that I get the joke)… and he had a stone Taurus that has the ability to break into any enclosed space. This falls into the hands of popular DuckTales villainess Magicka DeSpell.

The rest of the book has different stories from various places. One Brer Rabbit story (it’s neat this exists) and an English reprint of a French story starring Goofy and Horace Horsecollar.

This book is super cool! Most of these stories haven’t been published in the USA before and the Brer Rabbit one likely only had one printing before now in 1953. This is way cooler than I’m making it sound I assure you, but this doesn’t hold a candle to the third book I picked up.

Bonus Tip: Don’t let numbering scare you. I meet a lot of people who get scared of comics because they think they have to start at #1 in order to know what’s happening. In the case of Disney comics, I found that each one can stand on its own. So even though this book is #731 and the main feature is part 11 of 12, feel free to fearlessly pick it p or any other numbered issue in this series.

Dr. Devonian has some crazy theories. One of them is that Ancient Aliens traveled to Earth and gifted the Mayans with a machine that could transport them anywhere they want- consequently there are no remains of The Maya amongst the ruins we’ve discovered (a real mystery real-world archaeologists are trying to solve).

His crazy theories lose him the respect of everyone in the audience. Well, everyone except Mickey Mouse and his good pal Goofy. They speak with the professor and learn about his research team in South America being led by a mutual friend Doctor Eurasia Toft- an Australian Kangaroo Mouse who knew Mickey and Goofy from a previous adventure (she is also SUPER COOOOOOOOL). She’s discovered the nature of the transportation device but before she can relay the information the connection is cut off. Mickey and Goofy then go down to South America to find out what happened.

Hijinks ensue, and Mickey, Eurasia, and Goofy learn that the device gifted to The Mayans was a teleporter! But it’s not smooth sailing from here. First, they have to get through the jungle, back to the research team, find out the research team is Pegleg Pete and then 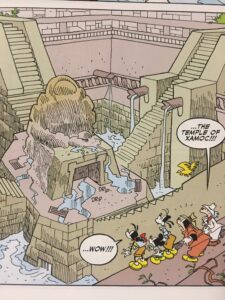 Look! It’s Mickey Mouse! Doing a thing! And it’s awesome! seriously, this book had me on the edge of my seat the whole time.

I loved this issue a lot. It’s fighting to be my favorite single issue of a Disney comic anywhere (including the Toy Story ones? I don’t know who I am anymore!). It’s all the best parts of DuckTales, Mickey Mouse, and Indiana Jones mixed together into an incredibly exciting tale that has me completely sold and heading back to the comic shop real soon to clean them out of their Mickey Mouse supply.

Comics are a fun way to get more adventures starring these characters who honestly don’t have a lot going on now. I’ve fallen in love with the new characters introduced and the returning characters feel fresh and exciting.

Bonus Tip: Do you want your comics to hold a special amount of personal value? consider having it signed and personalized by taking it to a Disney park and having a character sign the book for you! It’s a fun way to get a personalized and unique souvenir of your trip. check out All For Dreams Travel to book your next trip.

Well, that’s what I’ve got for you today! Feel free to share this article with a friend who likes comics, remember to get your comics legally and support your local comic shop (you can find yours with this handy link I’ve provided here!), and above all: remember to keep wishing on stars. 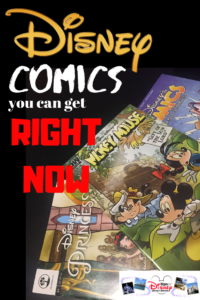