Disney Cruise Line’s Halloween on the High Seas: a Spook-tacular Way to Cruise 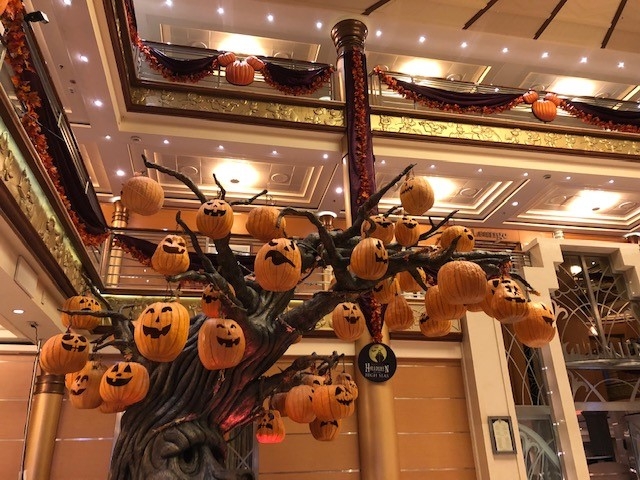 My husband and I recently had the opportunity to experience two incredible firsts at the same time: a cruise without kids *and* a Halloween on the High Seas itinerary on the Disney Magic. The itinerary itself was also somewhat ground-breaking, marking the first time a Disney Cruise Line ship has visited Quebec City, Canada. Halloween without kids? How could that possibly be fun, you might ask? Well, we both thought it was amazing, and a totally unique experience, and I would highly recommend one of these seasonal sailings whether or not you have kids in your group. 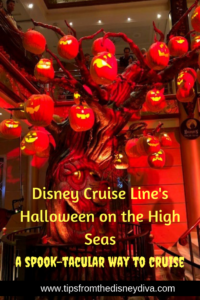 We were on this year’s first Halloween on the High Seas sailing for the Magic, and as we boarded in New York City, crew members were still putting the finishing touches on some of the decorations. The spooky vibe was all around us as we saw that the atrium was already decorated with a large Pumpkin Tree (each ship has a unique tree). Banners and other decorations were hung, and the windows on deck three were all decorated with jack o lantern faces. 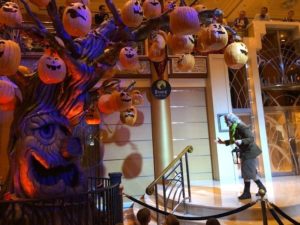 Tip: Trying to plan your packing? Call and ask Disney Cruise Line if they know which nights are going to be Pirate or seasonally themed. They often will know ahead of time which nights are pirate, formal, semi-formal, and themed.

This sailing featured both a Halloween themed day and a Pirate day, and they occurred on our two days at sea, which allowed everyone plenty of time to get ready for the festivities. And for a cruise with under 700 kids (and about 1000 fewer passengers than normal) I was surprised that so many people got into the holiday spirit. Many people wore Halloween-themed clothing for the entire cruise, and there were lots of folks participating in the various activities on the ship.

The Halloween-themed fun started on the first day: that evening everyone was invited to gather around the Pumpkin Tree in the atrium to listen to the Caretaker tell stories about Halloween traditions and light the tree. Later that evening, we stayed up to watch Tim Burton’s The Nightmare Before Christmas Sing and Scream, which is presented in 3-D. This is billed as featuring state of the art projection, sound, and in-theatre effects. There are subtitles to all the songs so you can sing (and scream) along. This was only offered two times during our entire cruise, and I highly suggest attending one of the shows. I don’t want to spoil the surprise, but you never know who might turn up afterward. 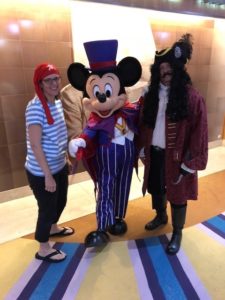 Halloween sailings are a great way to get photos of characters in costume.

Tip: Use your Disney Cruise Line Navigator app to find out when (or if!) activities will repeat during a cruise.

The rest of the Halloween festivities mostly occurred during our second day at sea. On that day, there were two separate Mickey’s Mousequerade parties in the lobby atrium, one at 2:30 and the other at 4:30. These events featured trick or treating, music, games, and visits from characters. It’s especially fun to see all of the characters in their Halloween costumes. 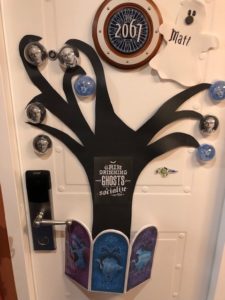 People even got in the Halloween spirit with their stateroom door decorations.

The treats that were being handed out (I may have snagged a bag to bring to a later showing of Solo) were high quality – treat bags full of Dove chocolates, Twix, Mars, and even a full-size package of M&Ms. (I did see signs for allergy-friendly candy, but I did not actually see what they were handing out). I don’t know if it was because it was the beginning of the season or because the ship was so empty, but there was lots and lots and LOTS of candy to go around.

The costumes we saw ranged from very simple t-shirts to one large family that were all dressed as Haunted Mansion cast members and inhabitants. We decided to try and save a bit on packing: my husband has a very elaborate pirate costume that he wears to Pirate night celebrations. So we bought him a hook and a wig and mustache, and during the Halloween celebrations he was Captain Hook. For myself, I found a blue striped shirt online and wore it with capris and flip flops and was Mr. (Ms?) Smee. 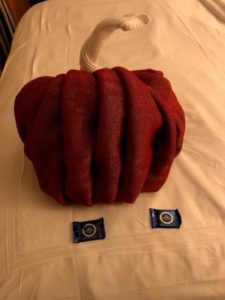 Our stateroom host even left a pumpkin on our bed.

The same types of dress rules that apply to Mickey’s Not So Scary Halloween Party also apply here, and you are not permitted to have costumes that are obstructive or offensive or to move around wearing masks that completely cover your face (you are, however, allowed to pose with characters in a mask and then take it off).

Tip: Stateroom doors all look alike. Express yourself (and help your cabin mates find your stateroom) by putting magnets on the door or hanging items from the fish (a metal, fish-shaped clip next to every cabin door). We even like to wander around to look at everyone’s door decorations.

On that day most of the activities were Halloween-themed: there were 3D Hatbox Ghost crafts, an animation class to teach how to draw Jack Skellington, and Scary-Okee Karaoke as well as several other Halloween themed games, portrait opportunities, and parties. There was also an adults-only Halloween isn’t Just for Kids costume party. We peeked our heads in, but did not attend, preferring the quieter atmosphere of Keys Lounge.

I really enjoyed all the Halloween festivities, they made this cruise truly unique for us. But it wasn’t an “in your face” type of theme. Most of the events occurred on the one day at sea. While there were lots of folks who participated, there were many who did not, so it would be fine to be in costume or simply cruise casual. To be honest, any Disney cruise is amazing, a holiday itinerary is just icing on the cake.

If you would like help on booking a Disney cruise or any other Disney resort vacation, All For Dreams Travel can help!  Contact Patricia today for your FREE quote!