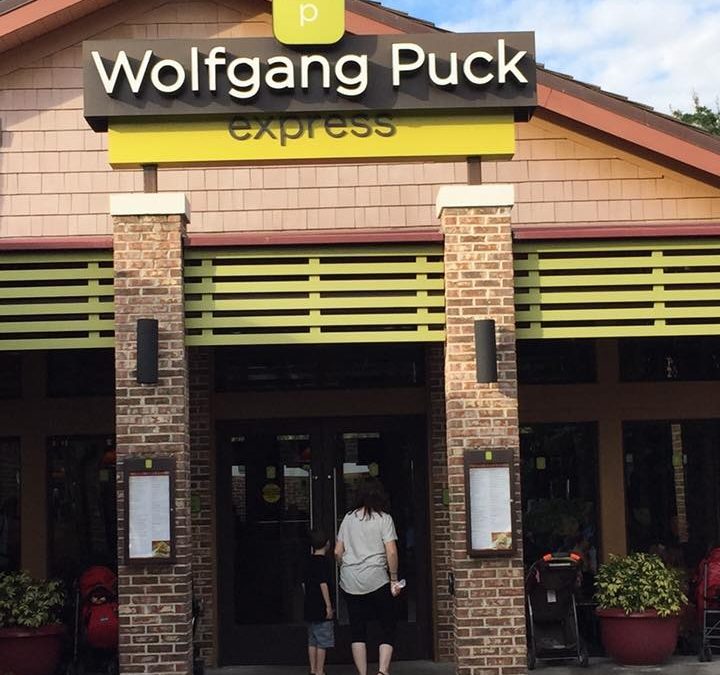 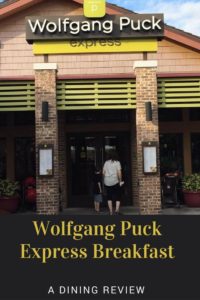 Most people are at least somewhat familiar with Wolfgang Puck Express, one of the oldest (if not the oldest) counter service restaurants in Disney Springs. It’s also well-known as one of the best values for a counter-service meal on the Disney Dining Plan since the entrees are huge and range in price from $8 for a simple salad up to $20 for roasted salmon.  The restaurant is also an incredibly tasty lunch or dinner option.  But most people don’t realize that it also serves up one of the best counter service breakfasts on property.

We discovered the breakfast at Wolfgang Puck Express’ Disney Springs Marketplace about six or seven years ago and have been returning for it ever since. When desserts were included as part of the Quick Service (QS) Disney Dining Plan, the breakfast was not as logical an option for thrifty-minded diners. However, now that the playing field is leveled, so to speak, by the removal of desserts from the QS plan, the breakfast makes almost as much “sense” as the other meals at this location. One other advantage: the entrees are HUGE. Whether using the meal plan or paying out of pocket, we have only ever ordered three entrees for our family of four, even though my teen and husband can have pretty large appetites.

The breakfast menu at this location isn’t huge, but what they do, they do well. Our favorite breakfast menu item is probably the Cornflake French Toast ($11). Served with maple syrup and seasonal fresh fruit, it sounds weird, but is unbelievably delicious in a crunchy, cinnamon-sugary way. In order to balance out the sinful sweetness of this dish, we generally also get the Breakfast Pizza ($14), which comes topped with scrambled eggs, bacon, mozzarella, cheddar and caramelized onions. This pizza is the size of the dinner pizzas, and can easily be shared (especially if you’ve got other entrees or side items). We’ve also ordered this without the bacon for my vegetarian daughter. 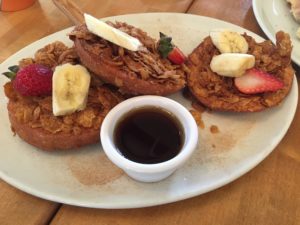 The Belgian Waffles ($10) are not Mickey head-shaped, but are huge and puffy and served with seasonal fresh Fruit, maple syrup and whipped cream. Yes, they are kind of like having a dessert for breakfast, but heck, you’re on vacation!

We have, over the years, tried the breakfast potatoes, which are tasty and can be ordered as a side, and the scrambled eggs, which are pretty plain and standard. But we keep going back at least a couple of times a year for our old favorites.

In fact, probably the strongest recommendation for breakfast at Wolfgang Puck Express would come from my kids, and they claim to actually actively dislike all breakfast items (I know, right, how can you hate BREAKFAST??!!!) But they absolutely clamor to come to WPE at least one morning each time we head to Disney. 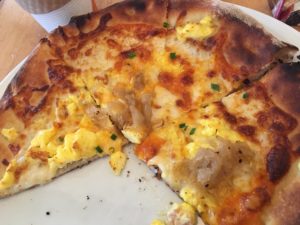 A vegetarian version of the breakfast pizza. It’s so good a piece is missing.

The service here is usually very friendly and helpful. While it is a counter service restaurant, you order at the counter, find a seat, and then your food is brought to your table. The wait staff usually also help you out with refills, napkins and silverware. The place is often pleasantly uncrowded at breakfast, and you can come on the later side and turn it into a brunch.

As mentioned previously, Wolfgang Puck Express does accept the Disney Dining Plan and also offers discounts to Annual Passholders, Disney Vacation Club members, and military servicemembers. They are open from 9 am-11 pm every day, and serve breakfast from 9 am – 11 am.

Have you tried the breakfast at Wolfgang Puck Express? What is your favorite on-property counter service breakfast spot? Let us know your opinions!

If you have any other questions regarding Disney Dining feel free to contact our FREE Disney Diva Travel Agent, Patricia at All for Dreams Travel.