I almost hate to tell you this… for fear you will be using my secret short-cut through Animal Kingdom next time I’m on vacation and slowing me down, but because I’m a good person, and a relatively NICE Diva, I will share a shortcut that will make navigating the EXTREMELY HUGE-MOUNGUS Animal Kingdom Park a bit easier.

Ok so pay attention here people…this is literally a strategy session. You might think Disney is a vacation, but during a busy season, its not that different than planning for war, so hunker down you harry dawgs.
photocredit: wdwtourguide.com 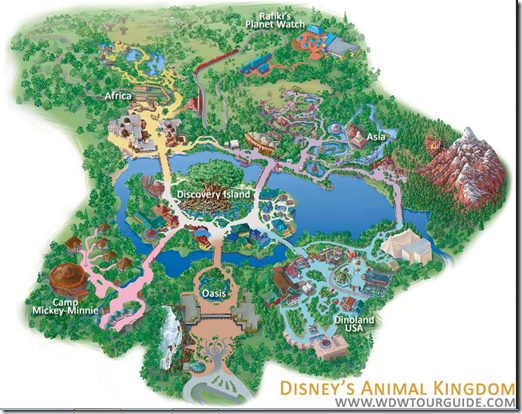 This is Animal Kingdom. 500 acres of Freakin’ Massive. And its seriously spread out. Now that stat is misleading, because a lot of that land you will never see because there’s animals roaming on it for the safari, and in their little observation paths, and the rarely visited Rafikis planet watch area. None the less the park that you walk FEELS SPREAD OUT. The lands feel like they are on different continents and moving back and forth between the extremes of Asia (where Everest resides) and Camp Minnie Mickey (where the Lion King show is) can be tricky and feel like 1 million miles away. It feels just as long when you’re trying to move from the Safari in Africa to Everest in Asia and since those the first two attractions most families hit first thing in the morning it causes some trouble for your “fast pass runner”.

Turns out that big giant Tree of Life is more than just a photo-op when you first walk in. to AK There are walkways in there folks. And those walkways are your ticket to short-cut heaven. 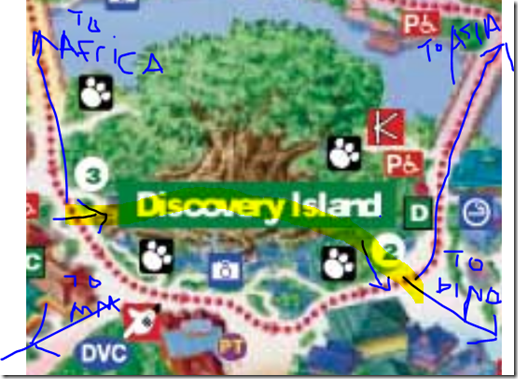 The one I most frequently use involves a pathway almost directly across from Pizzafari right outside of Camp Minnie Mickey and well on the way to the Safari. The path will meander through the tree and over “Its Tough to be a Bug” and dump you out right beside a Character Greeting near Tough to be a Bug. That also happens to be the walkway that could take you over to Dinoland, or turn left and head up before hanging a right and you’ll be at Everest.

A second entrance is right beside the Africa sign and will also dump you out again by the character greeting. So if you’re nearer Africa than Pizzafari you’ll want to use that entry. Its also a beautiful relaxing walking path that lets you get much closer to the tree and would be a good place to hide out to let your little one take a nap. Here’s a video of the shortcut that might help you visually understand:

Don’t get me wrong, its still some walking, but take it from someone who has walked this park over way too many times… this IS a shortcut and it will save you time and when things are busy it will also save you TRAFFIC.

One of the things that frustrates me most about Animal Kingdom is I feel like the walkways weren’t built to handle large crowds which appear around holidays and spring break. As someone who “makes the Fast pass run” for the family this frustrates the snot out of me. So I’m happy that a very sweet old Imagineer shared HIS secret walkthrough with me and I think you will enjoy it as well!

Now don’t tell anybody… or the Diva will get you!