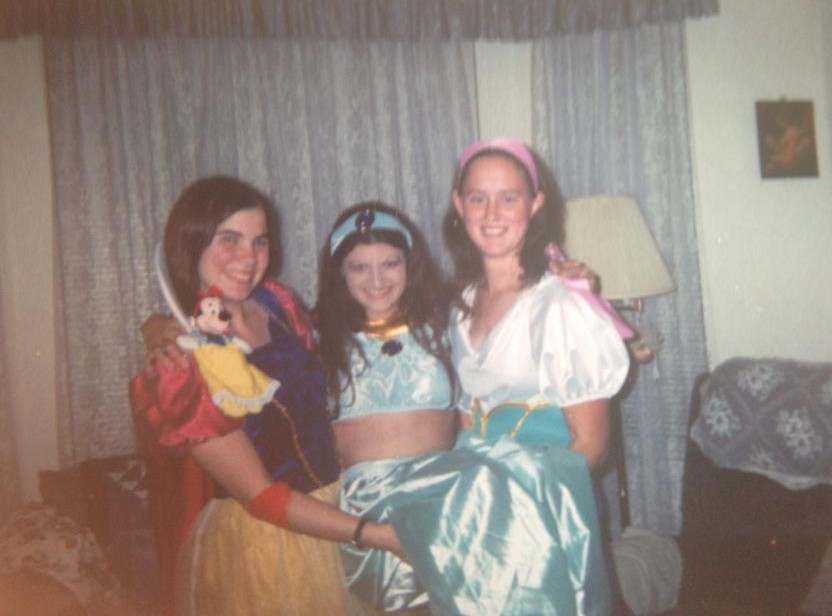 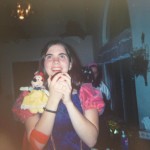 October means all kinds of things- tree leaves changing color, trips to the pumpkin patch, and of course, Halloween! And what better way to show your festive side than by sporting a Disney Halloween costume? Whether you are lucky enough to attend Mickey’s Not So Scary Halloween Party, or whether you’ll just be showing off your Disney pride around your local mall or neighborhood, there are all kinds of wonderful Disney costumes you can choose from!

First, let’s discuss store bought. There are two kinds of store bought costumes- ones that are specifically made, and others that are more… “Disney inspired”. For those of you seeking “authentic” Disney dresses, you can of course find them at places such as the Disney Store (and they have a TON this time of year), as well as the theme parks. Most of the costumes that come from Disney directly are more for children, though they do advertise a few babies and toddlers. And, can I just say how adorable the baby costumes are? This Donald Duck costume is one of my favorites! I just love the little feet!! Disney Diva Tip: In the past, I have seen (and bought) Disney costumes from the Disney store that were adult-sized, however when I checked recently online, they did not have these advertised. However you may wish to check again, just in case they have added some to their line since this article was written.

In addition to your normal princess and pirate costumes, you can also find characters from Marvel and Star Wars in Disney’s costume collection. Yup, in addition to going as Rapunzel, Tinker Bell, Buzz Lightyear, or Mickey Mouse, your child can now go as Darth Vader or Iron Man (and a variety of other characters). And for the Disney Junior fans in your household, Sofia the First, Doc McStuffins, and Jake and Izzy from Jake and the Neverland Pirates all have costumes available for purchase.

And what costume would be complete without accessories? Tiaras, swords, jewelry, shoes, hats, helmets, and bows and arrows make up some of the accessories you can add to your child’s costume to give it those last finishing touches.

Just remember that buying “more authentic” Disney costumes, also means you will be paying more… and the more elaborate and intricate the costume, the higher the price tag. Disney Diva Tip: Also, for those of you who wanting to go with a popular costume, such as Anna, Elsa, or Olaf from the hit movie, “Frozen”, make sure you get your costume early. You don’t want to run the risk of them running out of stock, and we all know Ebay prices for Frozen merchandise have been ridiculously expensive. 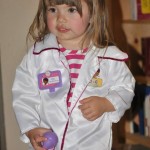 Next, there are the stereotypical “dress up” costumes that you can find at Target, Walmart, and so on. These costumes are generally more princess oriented (Tiana, Snow White, Cinderella, Aurora, Rapunzel, Merida, Anna, and Elsa) or fairy themed (Tinker Bell, Rosetta, Zarina, and so on.) You can also find Minnie Mouse, Sofia the First, and Doc McStuffins, but obviously your selection is much more limited (and while they are not made of the best materials, the price is definitely much more reasonable). The nice thing about buying a costume this time of year however, is that you will also find other costumes (including adult-sized) that they normally would not carry. And, if you want to do a Disney theme (such as you and your husband/wife going as Mr. and Mrs. Potato Head and your kids going as Buzz Lightyear, Woody, Jessie, or one of those cute little aliens) that’s a lot easier to pull off… and it’s still cheaper than buying them all at the Disney Store.

These costumes also come with shoes, tiaras, jewelry, wings, a doctor’s kit, and other accessories to enhance the look. Disney Diva Tip: These costumes are great (and who doesn’t love your child being able to wear them all the time, however they can take a beating, and like most costumes, are usually not machine washable. I do like the price however (Walmart had theirs on sale for Black Friday 2013 at $10 each, and even their normal price is around $20… which is less than half than the actual Disney store costumes). 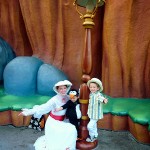 Next let’s move onto Disney inspired dresses and costumes. There are many Halloween or party themed stores and websites (such as Creative Costumes, Spirit of Halloween, Party City, Amazon.com, Ebay, and Etsy) that sell costumes, but can I just talk for a minute about one of my favorites? I want to talk about it because: 1.) I don’t think it is that well-known, so I figure I will share one of my “best kept secrets”, 2.) While the dresses are more expensive than what you’d find at Target or Walmart, the quality is much better and they are much more “durable” and 3.) THE COSTUMES ARE MACHINE WASHABLE! As a mom who was multiple loads of laundry at least three days a week, I greatly appreciate being able to toss a dress into the wash and not have to worry about washing everything by hand in the bathroom sink.

There is a site called “Mom Approved Costumes”. So far I have ordered three dresses for my daughter (the Cinderella work dress, and the Anna and Elsa inspired dresses), as well as the Belle inspired dress for one of my nieces. They also have free shipping if you spend over $75 (which is about three costumes). Disney Diva Tip: Most of the dresses ship out quickly (within a day or so… I ordered my niece’s costume on a Sunday and I believe she received it on a Wednesday or Thursday. However, if you want the Anna and Elsa themed dresses, they are on a preorder only order status, and unfortunately, the deadline of having them by Halloween is over. You still can preorder them for future dates, and I’m sure they’d be popular Christmas gifts! And just a warning, if you preorder an Anna or Elsa inspired dress along with other costumes, you won’t receive your other costumes until your Anna or Elsa dress is sent, unless you pay separate shipping. So just a heads up on that if you need a costume beforehand.) 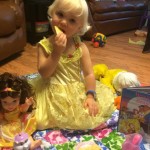 While my sister was at first skeptical about the price of the dress when I told her about the site, when she received the dress, she said it was very beautiful, and she loved the material. (Also, for those of you who have aversions to glitter or have events that need to be “glitter free”, these dresses fall in that category, and also have nothing itchy or scratchy to irritate your little one.) My niece also loved the dress… so much so that when my sister told her she had to put on a dress to wear to church, my niece asked if she could wear her “Belle dress”!! Disney Diva Tip: Mom Approved Costumes also has a line of Disney themed boy costumes including the prince from Cinderella, Beast, pirates, and a variety of other costumes. They also have dresses for dolls (think the American Girl type dolls), so if you want your daughter and her doll to have matching outfits, there ya go! 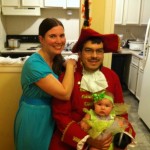 And I don’t think anyone’s Halloween would be complete without the wonderful DIY outfits. For my daughter’s first Halloween, I came up with the idea of going as Wendy, having my daughter be Tinker Bell, and having my husband be Captain Hook. (He refused to be Peter Pan, but at least I wore him down into participating!) I found my daughter’s costume at the Disney store, my husband’s main outfit came from Walmart (minus a few clothes from home, and then we cut yellow construction paper into squares and drew smaller black squares in the middle to be the buckles on his shoes. My dress was much more difficult. First, can I say how hard it is to find a Wendy’s costume? Well, okay, I found them, but they were either way too immodest for my tastes, or they were crazy expensive (which yes, to all of you amazingly talented Ebay and Etsy sellers, I realize you have a gift that I do not possess, and your dresses are truly amazingly beautiful and I know you have toiled many hours on them and the material is high quality, but I can’t justify spending over a hundred dollars for a costume I’ll wear once or twice). So needless to say, I did it myself. 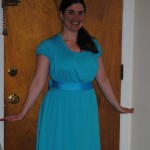 I ended up finding a turquoise nightgown on Amazon.com and used that for the base of my dress (which was super comfy by the way….  You know how wonderful Pajama Day is at school? That was Halloween for me… super comfy, no itchiness, and no constantly tugging at things and trying to readjust everything). I also found some really thick blue ribbon at Hobby Lobby and used that as a sash (which worked out great because the nightgown I bought had some weird lacy gap around the midsection that was just about the length of the ribbon, so it covered that perfectly, and made my dress look more like Wendy’s. I also used one of my daughter’s blue hair ribbons (though you can’t really see it in the picture). I ended up putting my hair in a ponytail as opposed to ringlets, but that was more out of my lack of talent for being able to do anything with my hair than anything else. Finally, I threw on my favorite pair of black ballet slippers and bam! Costume was done. 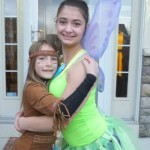 Keeping with the DIY Peter Pan theme, my cousin’s daughters went as Tinker Bell and Tiger Lily for Halloween last year, and while the Tiger Lily costume came from Party City, the Tinker Bell costume was a compilation of wings from The Dollar Store, a green tank top from Walmart, and some elastic and tulle for the skirt. All in all, about $12. Who doesn’t love prices like that? 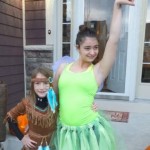 And if you are looking for more suggestions for DIY costumes, you can read D’land Diva’s article here. Of course, there are many, many Disney costume ideas out there, everything from the DIY 101 Dalmation costumes (Black shoe polish or paint on a white sweatshirt and sweats), to the elaborate and intricately detailed Rapunzel’s Wedding Gown, and even ones that play music. But the main thing is that the point of these costumes are to provide fun, and most importantly memories. And now from our Disney Diva family to yours, here below are some of our favorite Disney costumes to wear. 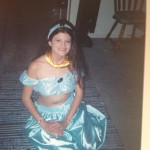 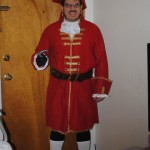 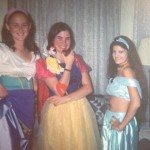 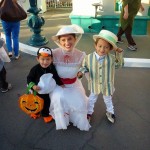 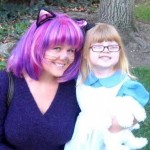 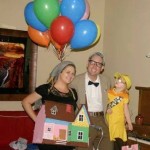 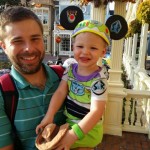 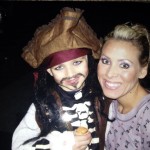 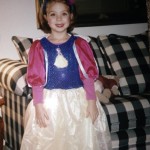 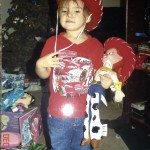 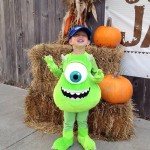 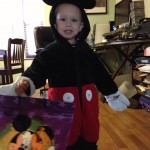 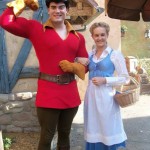 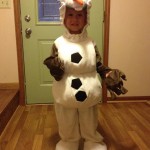