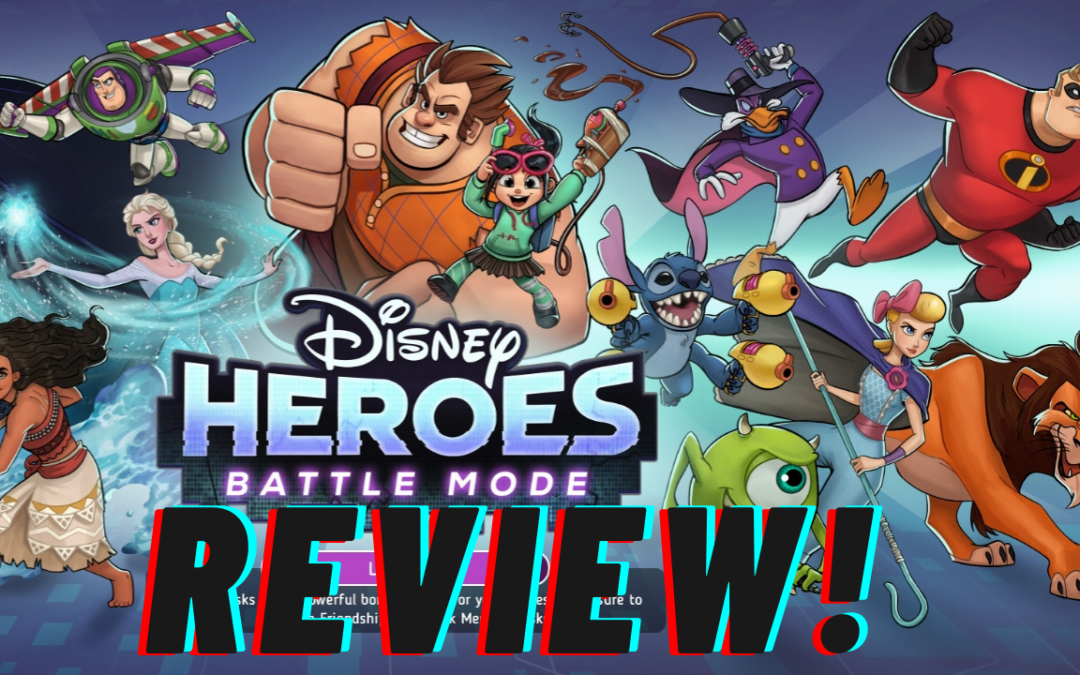 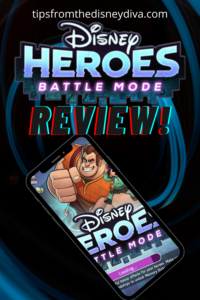 Did you know you can get a higher score by sharing this article to your friends? Well, not really, but it sure does help!

When it comes to video games I’ve been… less than kind to mobile games. Many of them fall into the same kind of traps that, should it be a full $70 video game on consoles, would spark outrage and even get the U.S. government involved. (it happened before. See Star Wars Battlefront 2 EA). It’s a real problem and the root of it is the success of games like Candy Crush and Bejeweled that make bad design choices that force players to spend more money.

So when Disney Heroes Battle Mode was made, I started skeptically. Disney has a bad habit of mobile games either being empty like Magic Kingdoms or crummy Candy Crush clones. But I did get a new phone recently and I need to put it through it’s paces. Let’s check out the game and see if it’s worth your time.

This is my main team. There’s enough flexibility to base it around your favorite characters and then fill empty spots with characters that have complementary skills.

Disney Heroes Battle Mode is a Real-Time-Strategy and Team Management game. In each stage, you are presented with a team of bad guys that all have different strengths, weaknesses, and combination bonuses with other specific bad guys. You have a roster of heroes that work the same way. You need to build a team with superior skills to the bad guys and then you fight them, making sure to time the different special abilities properly to get the best result.

The management part of the game is when you’re building and leveling up the heroes in your team. Each character is completely unique, even if someone else has the same character. You can assign badges, friendship tokens, enhance different skills and abilities, and more to keep your team unique and in top shape.

You’re Not Looking For Anything. You’re Building Character.

The big appeal to the game is the huge character list. There’s well over 100 characters on the game as of writing and all of them are uniquely structured, balanced, and maintained. Many of them have special additions like extra costumes and even some character animations can look different! You can tell the team behind the game put a lot of attention and love into the characters.

There are well over a hundred characters and a lot of them are super hipster. When was the last time you’ve seen Powerline make an appearance in anything?

And you can tell they love Disney as well. Along with the popular characters that you’d expect in the game; Woody, Mickey, Elsa, and such; the game also includes a lot of obscure characters. I thought I’d never see the day where Disney would release an official game starring Kim Possible, Megavolt, Powerline, Basil of Baker Street, and many more like that! Characters seemingly forgotten or discarded as unprofitable by Disney still somehow make it into this game! (seriously, when was the last time you think Disney made money off of the Great Mouse Detective?)

So how do I get stuff?

Good question! Now for a lot of collect-them-all games like this there are some shady elements that would force you to spend a lot of money to get even the basic characters that you want. This one though, I started the game and immediately I was given a “welcome” package containing a choice of one in four heroes. I picked Woody right off the bat. So First day on the game and I already had my favorite character.

There are two ways to get characters. You can unlock them slowly with character chips in-game, or through Diamond Chests. All the same, systems are there as in other mobile collect games, But the difference is in how they are handled. For instance, each elite level will only award you a maximum of 3 character chips, but there’s always a second one close by so really it’s six, and you can reset the count with diamonds pretty easily (more on those later). There are also alternate ways you can get character chips through accomplishing quests in the game’s daily quest and medals menus.

Diamond crates are primarily earned through purchasing them with diamonds (again, more on that later), but when you accomplish 18 daily quests (less than two days easy), you get two- four-diamond chests anyway. And at the beginning at least, I got most of my characters this way. These chests are very generous and you can build a team of fan-favorite characters very easily.

Now I also noticed that when they introduce a new character to the game, they have several different ways to get said character and level them up fast. When they introduced Basil, he was part of a challenge to unlock him with fifty character chips. Enough to get him to his third promotion. And the way to get him was really simple: spend the coins and play the game.

If you’re worried you won’t get a favorite character, don’t. That’s not a concern.

Stuff To Do (all the time!)

See! Do the quests and each week you get TONS of stamina and a chance for more characters.

You know how when you play, many games will tell you to either buy more turns or wait a day for your turns to reset? It’s the same basic principle here. You go so far and then you run out of stamina to keep on playing the main campaign. But this is another area where Disney Heroes takes the chance to defy the crowd and shine.

It’s very easy to get more stamina. Many events will just refill it for you and It also regenerates very quickly. If you are just starting the game you’ll have 60 stamina and that usually fills up within a couple of hours. and every week you potentially overfill your stamina count by reaping the weekly rewards.

Like most mobile games, there are two main currencies: coins and diamonds. Coins just keep on coming. Every battle you do gets you tons of coins. Diamonds are a bit tougher, but not much. Watch some ads? Boom. 30 diamonds right off the bat. Certain quests will just give you 10 or so diamonds. And certain levels will just give you a bunch of diamonds too. I never felt like I was wanting for the premium currency.

Even when buying stuff, this game is generous. And each purchase has permanent effects rather than a temporary boost.

Now after the first little bit I was really impressed, so I went ahead and gave the developers 3 bucks for doing a good job. So what happens when you purchase an item in the game? When you first start the game, they will double your gems-per-day purchase. So 2.99, which would buy you a month now buys you two months and makes the game a lot easier during that time. And every purchase comes with bonuses that get rid of the more annoying elements of the game permanently as well as permanent boosts. More daily log-in rewards, no more ads, double rewards in battles, upgraded chests, and a lot more.

So while the game is totally fine by itself, I’d say this is a rare instance where paying for it is actually beneficial for the long run, especially if you find you like this game.

Who should play it

The actual gameplay looks like this. your team goes up against a corrupted team and through a combination of planning and timing of special moves you try to defeat the enemy team.

Well, on one end we have the Disneyphile. If you love Disney, and I mean really love it, and you know your stuff, the sheer amount of easter eggs, references, and nods will drive you nuts! Nearly everything from the hundreds of badge names, level names, background art, all of it is a reference to something in Disney’s vast library. We’ve got representation from movies long-since forgotten by the studio itself. James and the Giant Peach, The Black Cauldron, Flubber, it’s all here.

But for the atmosphere of the game, the game goes for the demographic that is into movies like “Atlantis” or “Treasure Planet”, likes sci-fi, grew up on Kingdom Hearts, and has been largely set aside in favor of 3D animated princess movies and fuzzy animals. Harsh, I know, but you have to admit that movies like “Atlantis”  just aren’t made by Disney anymore and nothing really comes close in terms of genre. If you miss that vibe, you might find that again here.

Disney Heroes Battle Mode is easily my favorite mobile game. I never feel like I’m being taken advantage of, there are almost endless things to do, and the love and care the developers put into this game and into Disney fandom is fantastic. Everything is a reference to another Disney property somewhere, and if you do choose to pay money on the game then you receive benefits and bonuses that actually make the game better rather than just giving you more turns as other games do.

I highly recommend this game. So when you’re standing in line for a ride, waiting on a tram, or relaxing in your hotel room, This is a great way to make time seem a little bit faster while retaining that Disney Magic.