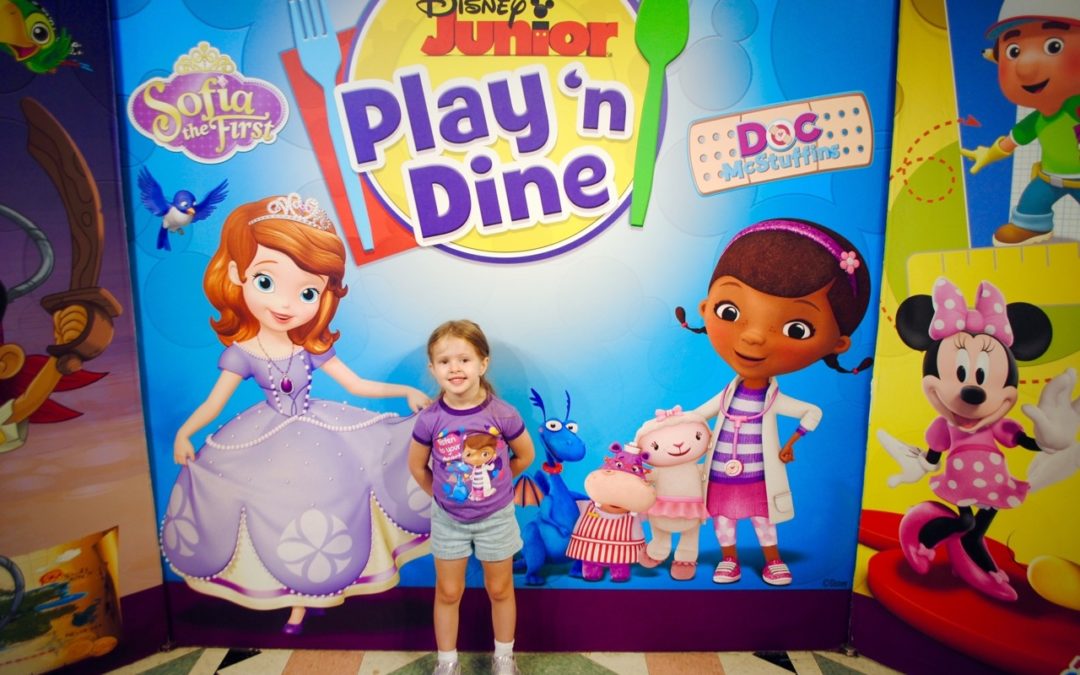 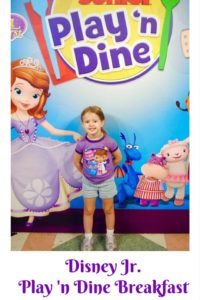 Despite how often I have visited Walt Disney World, I still try to experience something new each trip. For example, getting a reservation at a restaurant I’ve never tried before because the food is always one of the highlights of my trip. Traveling with my daughter on our last visit gave us a great excuse to schedule a dining experience we’d never even thought of before when we just traveled with adults- Disney Junior’s Play ‘n Dine at Hollywood & Vine. In fact, despite being frequent patrons of 50’s Prime Time which is close enough to share their bathroom space, I didn’t even know where Hollywood & Vine was until we started researching for our trip. 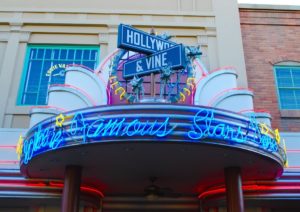 Due to the fact that we made our trip plans less than 180 days before we planned to travel, we did not have the wide availability of reservation times that we’re used to. Luckily, I was able to grab a slot at Hollywood & Vine after a couple of days of frequently checking Disney’s dining page for openings. Although I didn’t realize it at the time, the reservation ended up being a pre-park opening reservation, which turned out to be really cool. Our family doesn’t usually enjoy early mornings, so we’re not normally big on pre-park opening reservations. In fact, before this trip I had never been to any park but Magic Kingdom before it opened. I hadn’t visited Hollywood Studios since the removal of the Sorcerer’s Hat, so it was it was very exciting to have an unobstructed view of Grauman’s Chinese Theater for the first time in 15 years without any people standing in the streets. 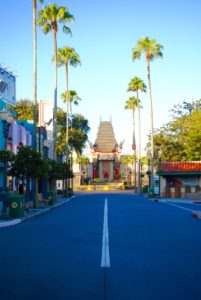 My daughter is a huge fan of Disney Junior, so she was definitely excited to see several of her favorite characters joining us for breakfast. Getting her to agree to sit down and eat something until the characters came out was nearly impossible. The buffet selection was decent- all of the foods you would expect to find on a breakfast menu. Despite the reviews I’d read before our trip, I thought the food tasted pretty good and the service was even better. Our waiter was very attentive, friendly, and efficient.

The highlight, of course, was seeing how excited my daughter got when the characters came by the table to visit. First up was Sophia the First. My daughter was practically bouncing out of her seat by the time Sophia walked over to our table. 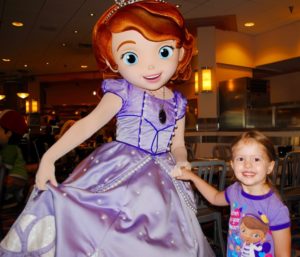 Next up was Handy Manny, a character my daughter wasn’t too familiar with. I expected her to only be slightly interested, at best, but she was excited to see him too and later stuck a pen behind her ear in an attempt to be like Handy Manny who always wears a pencil tucked behind his ear. 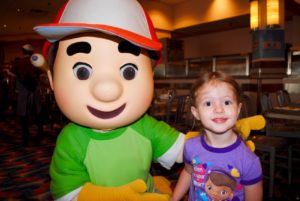 The third character to visit was by far my daughter’s favorite character since she was very little. Doc McStuffins has always been very popular in our home. In fact, my daughter had chosen to wear her shirt with Doc on it to breakfast so she could show it to Doc when they met. 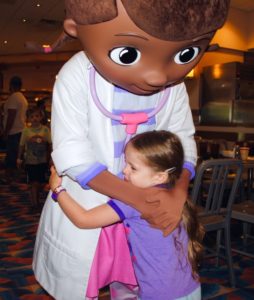 The final character to visit our table was Jake. While my daughter’s favorite character from that show is Izzy, she was still excited to meet Jake. 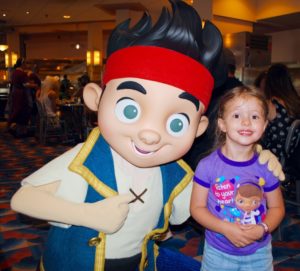 Overall, we really enjoyed starting our day at Hollywood & Vine. The food was good and seeing my daughter so excited to meet some of her favorite characters was more than worth the cost. If you have a Disney Jr. fan, I would definitely recommend the Disney Jr. Play ‘n Dine breakfast at Hollywood & Vine on your next trip.

Ready to book your next vacation and get some extra assistance planning your vacation… for FREE? Contact Disney Diva Travel Agent Patricia from All for Dreams Travel!