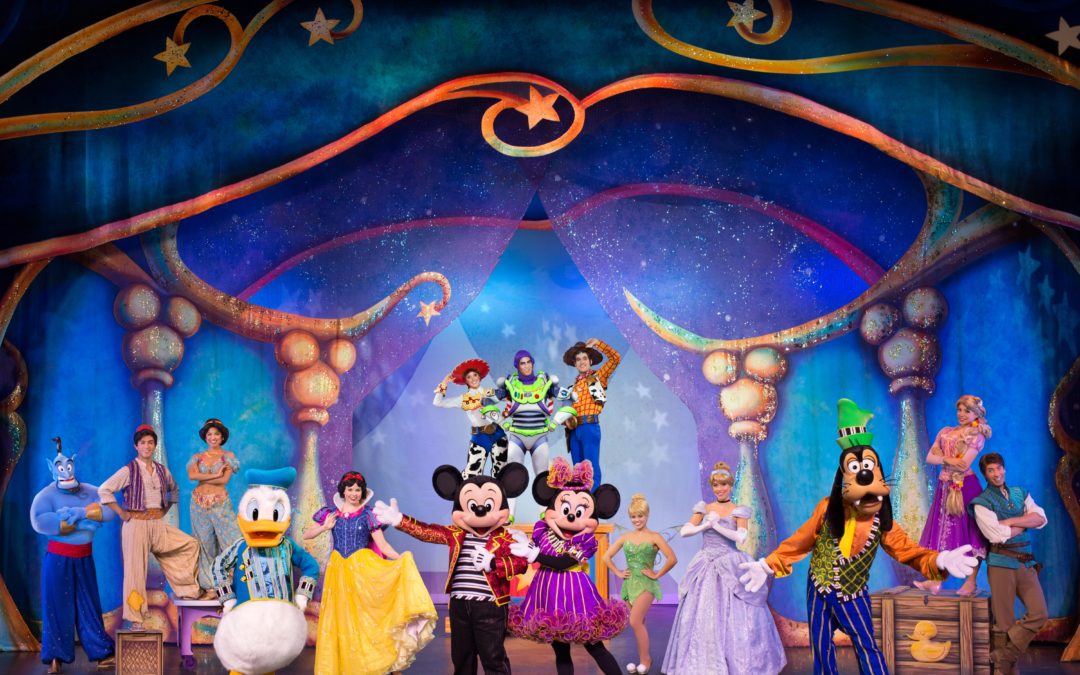 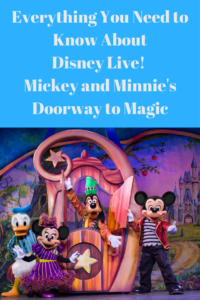 Over the last few years, our site has been able to partner with Feld Entertainment to see some amazing productions, including Disney on Ice, Monster Jam, and Marvel Universe Live! And while I knew Disney Live! also toured the area occasionally, my family and I had never seen it before. So you can imagine how excited I was as soon as I heard that “Disney Live! Mickey and Minnie’s Doorway to Magic” would be performed at the Santa Ana Star Center in Rio Rancho, NM near where I live.

Now as usual, I try to give a pretty thorough review of any show I see. After all, I want you to be able to make an accurate assessment on whether or not something is worth seeing. But if you want the short version (and don’t want any spoilers tainting your experience), let me sum it up for you: The show is amazing; go buy your tickets (and pay for the upgraded seats… you’ll thank me later.)

Still want to know more? Oh good… because I have all kinds of great tips to share with you!

First let’s talk about souvenirs. As always, I highly recommend arriving to your venue early. We arrived an hour before the show started and there was already a fairly long line to get in (though it did move fairly quickly). Because we arrived early, we had plenty of time to use the bathrooms and check out the souvenir section. There was a photo opp available with a Mickey statue if you chose to pay for that (taking pictures with your personal phone or camera was not allowed unless you were also buying pictures). They also had the usual toy souvenirs and treats such as popcorn, cotton candy and snow cones. Some sample prices for you included programs which cost $25, lemonade which cost you $14, and both the Cotton Candy (either in a Buzz Lightyear foam helmet or in a Mickey Mouse crown) and snow cones (in a character souvenir cup… I really loved the Rapunzel one with the Pascal straw) came in at $12 each. 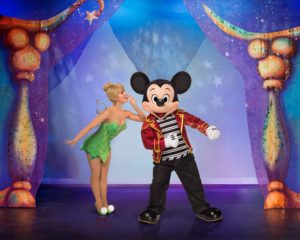 As far as seating goes… I highly recommend sitting as close as possible, preferably towards the stage. While every venue is different (so make sure to check your venue’s seating arrangements), we were on the ground level, four rows back, center stage. We really couldn’t have asked for better seats (though they weren’t raised so you may have to worry about tall people being in front of you if you have small children). Not only did we have a perfect view of the stage and were able to see all of the characters clearly, but there is a lot more interaction with the crowd in those first few rows. For example, one girl in the front row was chosen to have her shoes be transformed into Cinderella’s glass slippers, and we were also sprinkled with streamers and confetti at different parts of the show.  But the best reason to sit in the lower section is you get to play with “meteors” (giant balls) that are tossed around like crazy during the Toy Story segment. My entire family was laughing as we would try and reach out to hit the meteor somewhere else. This was by far the best part of the show in my mind and definitely worth the upgrade.

Not able to get prime seats? That’s okay. The show is very interactive. Throughout the show, you need to say the magic words, “Wiggle your fingers, stomp the ground, make some magic all around!” and do little movements, which is great, particularly if you’re accompanied by active kids who may need to get some wiggles out.

As for the show itself, it begins with a few dancers joined by Donald Duck, Goofy, Minnie Mouse, and finally Mickey, all who were greeted with much applause from the audience. As soon as the lights turned off and the show began, my three year old son was mesmerized. My almost five year old started laughing at Goody on his scooter. Tinkerbell also arrives fluttering around as lights before she finally emerges through one of the many doors on stage. After she disappears, Goofy and Donald disappear through a door (whose doorknob looks like the one from Alice in Wonderland… a nice Disney touch) and they go off on their first adventure. Meanwhile, Mickey and Minnie decide to have an adventure of their own, which leads into the Cinderella sequence. 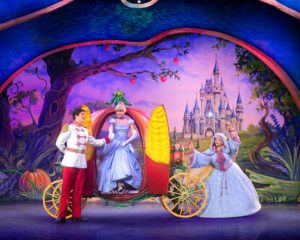 For the Cinderella sequence, we first see the Fairy Godmother, followed by Cinderella dressed in rags. Trying to make sure that Cinderella will be able to go to the ball,  the Fairy Godmother summons two royal attendants to help find someone whose shoes she can borrow to change into Cinderella’s glass slippers. After some special effects, the audience member’s shoes were transformed into some beautiful, sparkly shoes and then the carriage emerged where Cinderella climbed inside and then emerged in her beautiful ballgown where she was able to meet and dance with the prince. 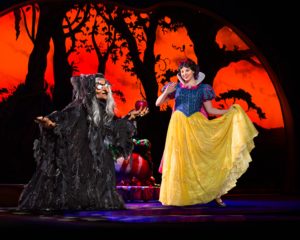 The sequence then switched over to Goofy and Donald whose door had led them to Snow White and the Seven Dwarfs. In this sequence, they find the magic mirror as well as the evil queen who transforms herself into the hag and tries to poison Snow White with a poisoned apple. Just as Snow White is about to bite into the apple, Goofy, Donald, and the audience convince her to do otherwise with the help of our magic words again. Snow White rejects the apple, and gets to continue living happily ever after. Personally I found this segment a little short, and I would’ve liked to have seen the dwarfs, but it was still pretty cute, and I loved the hag’s costume. 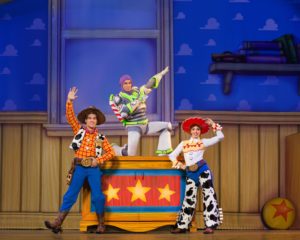 Taking a break from the princesses, the next segment moved onto Buzz Lightyear who performed a mini segment using lots of green lasers. Mickey, Minnie, Donald and Goofy were also reunited in this segment, and after Buzz left to continue defending the galaxy, we found ourselves in Andy’s bedroom where seven green army men emerged from a toy box and did a dance routine. (This was my five year old son’s favorite part of the show). Jessie and Woody also emerged from the toybox, and Woody performed lasso trips before the rest of the Toy Story gang did different dances and tricks using jump ropes. Watching Jessie and Woody dance together (while jump roping) and seeing all of the seven army men jump rope while Jessie and Woody turned it was a lot of fun to see, but the best was yet to come. When Buzz Lightyear came back, he told everyone he had just been caught in a meteor shower. When he was asked what happened to the rest of the meteors, that’s when the real fun began! Suddenly large inflatable balls that looked like meteors came towards the crowds and the audience would desperately try to hit one of the meteors and send it to another part of the crowd. My husband and I had a lot of fun trying to hit the meteors (we each hit a couple of them) and all of my kiddos loved trying to reach them too, including my nine month old. Seriously…. SO MUCH FUN!!! But sadly, the fun had to end at some point and so the meteors went away and the audience prepared for a brief intermission (just long enough to go to the bathrooms, maybe visit quickly, or grab a snack, so don’t stray from your seats for too long!)

After intermission, Mickey was separated from Minnie, Donald, and Goofy, but he did a short sequence of The Sorcerer’s Apprentice. I really enjoyed the special effects in this sequence, particularly getting to watch all of the brooms spin and dance as they cleaned the stage. 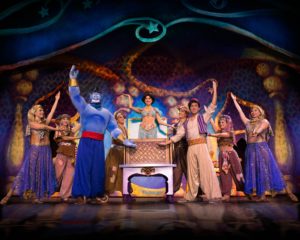 Next came Aladdin. The Genie appeared and was trying to summon Aladdin who just showed up on his own. Jasmine soon joined them and they did a quick dance number to “Friend Like Me.” Then a giant Magic Carpet appeared and wrapped itself around Jasmine only to unwind and reveal Rapunzel, which segued into the Tangled segment. 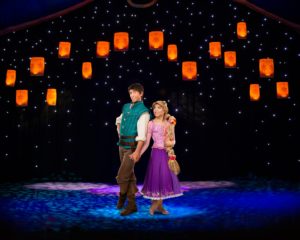 The Rapunzel segment had two songs from Tangled, “I’ve Got a Dream” and “I’ve Seen the Light”. The I’ve Got a Dream segment had a few tricks in it, but the last song had even more special effects, with both Rapunzel and Flynn levitating at different parts of the song.

The show ended with all fifteen of the main characters returning onto stage and confetti sprinkling down on the audience. Several kids poured out of the aisles after the show as they hurried to collect the fallen scraps of confetti for some free souvenirs. I looked as we were leaving the show and noticed that there didn’t seem to be any confetti past row G, so sitting in the first few rows will definitely be your best chance at having the most interaction. 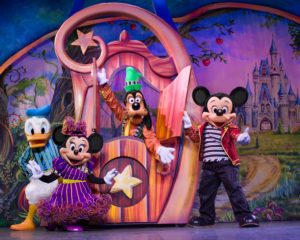 Overall, we really enjoyed this show. The army men sequence, the meteor sequence, and watching Rapunzel fly were all some of our favorite highlights of the show. Feld Entertainment is known for putting on great, high-quality family entertainment and as usual, this show did not disappoint.  I highly recommend seeing it if it comes to an area near you. For more information and to see if it’s coming to a city near you, click here!

Disney Diva Disclaimer: I am a Feld Family Activator and my family and I received complimentary tickets in exchange for my review of this show. While we did receive tickets for free, we pride ourselves on our honesty in our reviews, and all opinions in this article are 100% my own, and not influenced in any way.