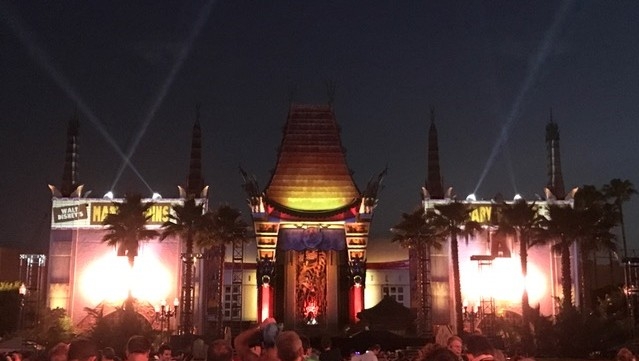 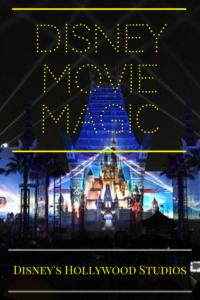 Summer is in full swing, and you won’t want to miss one of the magical new shows Disney Parks unexpectedly introduced as a night-time treat! Without much notice, “Disney Movie Magic” began showing this summer at Disney’s Hollywood Studios.  It’s a wonderful trip down memory lane that lets you relive and celebrate some of your favorite movies as they are highlighted in a stunning projection show.

This show, performed each night immediately before “Star Wars: A Galactic Spectacular,” will delight every movie fan. Using cutting edge technology, clips from some of the most beloved Disney films are projected onto Grauman’s Chinese Theatre.  And since that huge theater isn’t big enough to hold all the fabulous scenes from our favorite Disney movies, there are giant big screens on either side of the theater which provide even more projection surfaces. But wait! There’s more!   It is also part light, laser and music show, with beams of light shooting out right over the heads of the audience.  It is truly a panoramic set, with action happening 180 degrees around you! 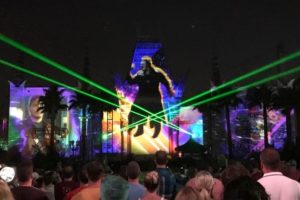 Diva Tip: While it’s so tempting to be in the very front of any Disney performance, you may want to find a viewing spot a little further back.  There is such a wide display of film clips and lasers that you may not really see everything if you stand too close to the front!

The entire show is only about 10 minutes long, but during it you will be entertained by some of your most beloved scenes from Disney movies. No matter what genre you prefer, you’ll probably see it during “Disney Movie Magic.”  Classic films from a broad range of cinema are featured:  romance, comedies, fantasy, sci-fi, musicals, and adventures.  Blockbusters that endure forever such as Beauty and the Beast, Mary Poppins, Jungle Book, Indiana Jones, Guardians of the Galaxy, Pirates of the Caribbean, and Cinderella are naturally highlighted, but also some moments that don’t get as much love –  we saw glimpses of Who Framed Roger Rabbit, Old Yeller, Zorro, and Good Morning Vietnam just to name a few. 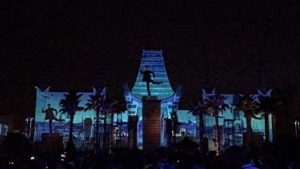 The show does a nice job of focusing heavily on some films, and yet finding time to feature dozens of our favorite movies in the short 10 minutes. For instance, the dishes dance all across Grauman’s during the big Be Our Guest production number, and the chimney sweeps appear on the rooftops during Mary Poppins . But at other times there is a montage of films all appearing at once on the buildings and screens. Short, 2-3 second clips of iconic scenes similar to the final room in The Great Movie Ride give you the chance to remember and reminisce about Disney films. We walked away awestruck – it was a lot to take in and somewhat demoralizing that we couldn’t name or remember everything we had just seen.  My husband is really the film buff in the family, and although he did much better than I did at recognizing and naming ALL the films, even he was impressed by the variety and number of scenes presented in such a short time.  To condense all those films into 10 minutes really was Disney Movie Magic!

If you need some help in making your last minute plans to visit Walt Disney World resort this summer, be sure to contact Patricia at All for Dreams Travel. She’ll work her own brand of magic to make your vacation perfect, and it is completely FREE!