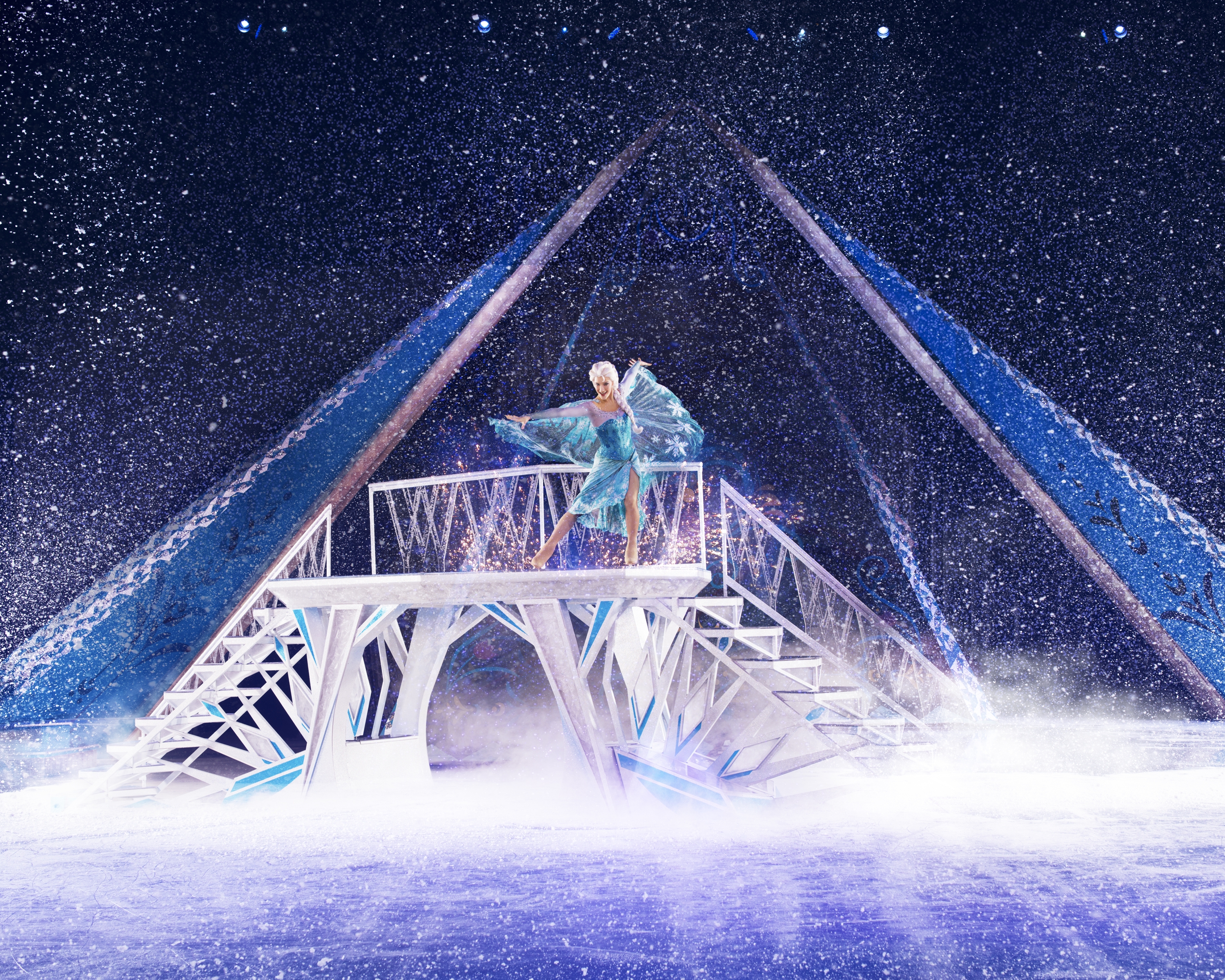 When Tips from the Disney Divas & Devos were first contacted by Feld Entertainment about doing a review on Disney’s on Ice Frozen presented by Stonyfield YoKids, we were all elated. I attended my first Disney on Ice show (Beauty and the Beast) when I was in the third grade and had been smitten ever since! Now that I have young children of my own, I was eager to pass that experience and tradition onto them. 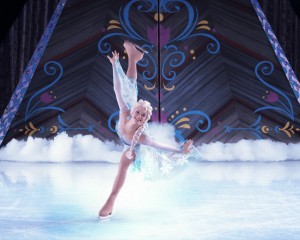 From the first time I heard the song, “Let It Go”, I thought, wow, this would be a fun song to do an ice skate routine too. Now I am not a skater by any means, and would never even think about skating backwards, let alone doing a triple axel, but that’s where all of these wonderful figure skaters can come in! 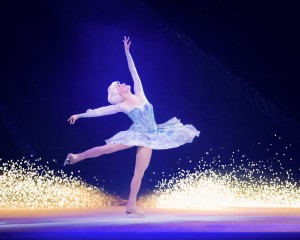 The beauty of attending a Disney on Ice show is that it really is a full-blown production. It’s like combining the lights, music, costumes, and choreography of a Broadway musical, and then taking the show a step further by adding ice in the mix. So for those of you who can’t wait until 2018 for the Broadway version of Frozen, I highly recommend checking out Disney on Ice’s Frozen Presented by Stonyfield YoKids! There is literally a whole new spin on the show!

The show is an abridged version of the story, with a few minor characters missing and a couple of scenes slightly extended, but overall, it is pretty true to the original storyline. Also, most of the voices are supplied by the original cast, which gives it that nice feeling of authenticity. And without (hopefully) giving away too many spoilers, let’s take a quick look at some of the highlights of the show: 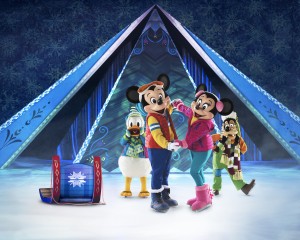 To begin with, Mickey and Minnie make their debut as the show’s hosts and are accompanied by an entourage of favorite Disney characters, including Goofy, Donald, Snow White and her prince, Cinderella and Prince Charming, Rapunzel and Flynn, Ariel, Eric, Woody and Buzz, Timon and Pumbaa, and Dory, Marlin and Nemo. All of my kids loved seeing some of their favorite Disney characters, and it was a nice way to start and end the show.

From there, you transition into the story, beginning with an appearance of young Sven and Kristoff. Let me just tell you, my kids were excited! The amount of clapping and cheering Sven and Kristoff earned when they came out may have only been rivaled by everyone’s favorite snowman. If you read our interview with Kristoff (aka Jono Partridge), you know that his favorite scene is when Olaf makes his debut appearance. The crowd REALLY gets into it. And I mean really… which is great, because unlike some other shows or performances, Disney on Ice really encourages you to participate, so feel free to let it go and sing, clap, and cheer along! 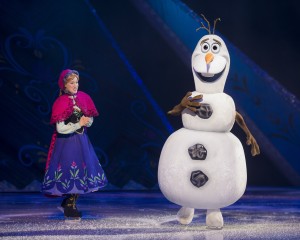 Now let me say… the show in itself is amazing. I overheard one woman saying that it was the best thing she had ever seen and she couldn’t believe how thorough it was. For me, personally, I had two favorite parts of the show: Marshmallow, and the trolls. And while I don’t want to completely spoil it, I have to say that I was highly impressed with how Marshmallow came to life, and I loved watching the trolls roll out onto the stage in rock form! 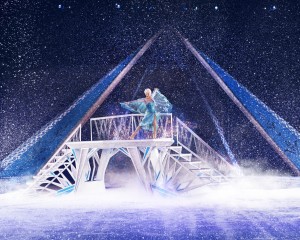 Now I’m sure if you have a young daughter, you’re probably already opening a tab to Ticketmaster to buy your tickets or heading to the website to see if it is coming to your area. But I know those of you with sons may be on the fence about buying tickets. While there are definitely large numbers of boys that make up the Frozen Fever Fan Club, you may be questioning if Olaf, Sven, and Kristoff’s antics will be enough to keep your boys enthralled. I am happy to say that there is children of all ages (as well as the young at heart) will love this show.  My son’s favorite part of the show was the scene with the wolves and he kept asking if the wolves would be returning. And with Kristoff performing backflips, lots of pyrotechnics, and even a shower of snow descending on the skaters, there is plenty of Disney magic to experience. 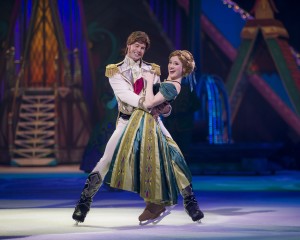 And because here at Tips from the Disney Divas & Devos we are all about sharing our favorite Disney tips, for those of you with tickets to the show (or are planning on going), here are some bonus tips for you:

How to buy tickets?-  You can find all kinds of information on the Disney on Ice website. This will tell you what shows are coming to a city near you, what dates they will be there, as well as some other fun facts about the shows. You can also get a FREE copy of a Disney Frozen virtual book. 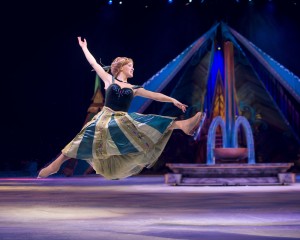 Parking- While I realize this varies from venue to venue, make sure you know where you park. Like any crowded area, it is easy to get disoriented, and you want to make sure you have it written down so you can get in and out as quickly as possible. You don’t want to be that family who gets to take the scenic route and count how many out of state license plates they see while hunting for their car.

Traveling with Little Ones- My family makes up the “Under 6” crowd, so we tend to take a couple things into consideration. As far as the show goes, it’s about 2 hours long (our show started at 7pm and we made it back to our car around 9:15pm), so take that into consideration if you’re throwing off bedtime schedules or needing to readjust naps. There is an intermission right after the Let it Go scene, for those who need to use the bathroom, shop, or just want to stretch their legs. 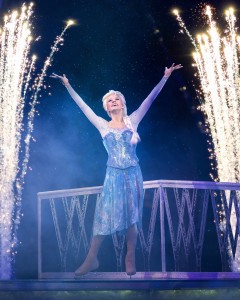 Also, the last thing you want to do is have a small child stuck behind a tall adult. While you can’t always help who you are sitting by, taking a jacket or sweatshirt for your child to sit on may help alleviate the problem, and as an added bonus, if it’s cold outside when you leave, you’re all set to go.

Souvenirs- for those of you who are wondering how much you should budget for souvenirs, the cheapest thing I saw were coloring books for $5 while the most expensive items were stuffed animal dolls of the princesses for $35. Most of the merchandise ran in the middle range, of about ($12-25) and was similar to what you could find in the Disney parks. One of the great things about the merchandise was that while it was pricey, they offered more than just Frozen merchandise, and you could find other characters such as Rapunzel, Pascal, Mickey, Buzz Lightyear represented as well. They also had face painting and a photobooth to take a picture with a cardboard cutout princess of Anna & Elsa. 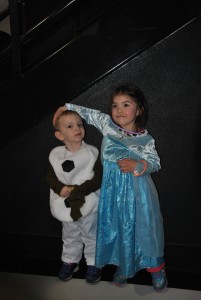 Costumes- We saw many cute children dressed up in Frozen attire… be it shirts, dresses, or the full-blown costumes, if you have a child attending the show, I highly recommend adding that extra dose of magic. Worried that your child’s costume might tear or be too itchy to sit through a performance? Try Mom Approved Costume’s Frozen Inspired Dresses, including the new coronation gowns for Anna and Elsa!

When to get there- I would arrive early. Again, venues vary, but ours required us to walk through metal detectors and have our bags checked. And it’s always best to get their early… they do have a pre-show where everyone is invited to stand up and build a snowman, and for the most part, the kids seemed to really enjoy it and get into it.

Where is the best place to sit- While I can only speak to the Sleep Train Arena in Sacramento, I definitely recommend spending the extra money and sitting on the lower level. Our venue had two levels, and while I did not go upstairs to check out the views, I can only imagine that the skaters looked like little ants. Unlike other main events you may see, there weren’t giant television screens portraying closeups of the skaters… and while some may argue that you get more of a broader perspective by having a bird’s eye view, I found that sitting in the lower level was great. You could really see how animated the characters were, particularly Anna.

As to where to sit on the lower level, I can again, only attest to  my experience. We sat in row q in section 1o4, and I felt we had perfect seats.  I really don’t know if you can have a “bad seat” for watching Frozen. All of the performers do a wonderful job of catering to the crowd (and take lots of time on platforms throughout the show to wave to the crowd), but to me, it seemed that sections 102-108 would be the most appealing.

Wherever you are sitting, this is definitely not a show to miss! Have you seen the show? Are you planning on seeing it? Or do you have another favorite Disney on Ice show? Feel free to leave a comment below telling us all about it!

Disney Diva Disclaimer: All of the images of the Frozen performers used in this article were provided by Feld Entertainment. Feld Entertainment also provided my family complimentary tickets for the show as well as four other tickets for a giveaway in exchange for my review. Though we did receive these benefits, the writers at Tips from the Disney Divas & Devos always provide their honest opinion and the thoughts expressed in this article are 100% entirely my own.

Wishing on a Star Diva

I have been growing to Disneyland since I was an infant, and now that I've married my Prince Charming (who even proposed in front of Snow White's wishing well), I am excited that I am now able to share the magic with my own children. I love wishing on stars and I still believe that dreams really do come true!