Disney on Ice Presents Passport to Adventure Interview with Angie Lien aka Elsa! 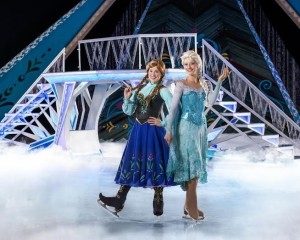 To give you a little background about Angie, she grew up in Wisconsin (and still lives there when she’s not on tour). She was a 6-time National competitor, 2003 World University Games Silver medalist and USFS Gold medalist. She also is a certified pilates instructor and enjoys snowboarding, cooking and spending time with her husband and family. Her husband also works on the tour with her, and so they are able to travel together and share in their experiences, which makes working with Disney on Ice particularly special. So now that you know a little more about Angie, let’s dive into the questions! 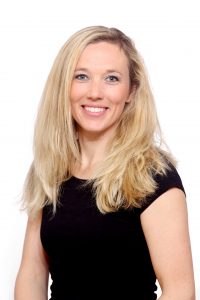 1.) What is your favorite part of your show? Our opening number, “It’s A Small World.” I like it because it takes little parts of the world and brings them together into one room. I also love the song.

2.) Who is your favorite character in the show? Elsa. I really love playing the role of Elsa… it’s really spectacular. She’s a fun character and a regal character and it’s been an honor to do it.

3.) Do you have any other favorite Disney characters and/or movies? I always loved Peter Pan and Lion King growing up.

4.) How long have you been ice skating? About thirty years. I started when I was very young and tagged along with my mom since she was a skating coach. I wanted to try it out and the rest is history!

5.) What do you recommend for other ice skaters who hope to perform with Disney on Ice? If it’s something that you want to do, keep going for it and work on that goal. If you’re determined and put in the hard work, you can meet your goal. It’s always possible.

6.) What is your best tip for guests attending the show? Come with some good lungs because we love it when everyone sings along with the songs. It gives the skaters a lot of energy and we love giving it back to the audience.

7.) Have you ever been in any other Disney on Ice shows? I’ve done two other shows. I first joined with “Treasure Trove” and then did a short stint on the show, “Magical Ice Festival”.

8.) How long do you stay on tour? Each show is different. There’s a different schedule for each show. Usually it’s 6-9 months depending on the tour schedule, sometimes with breaks in between, other times not.

9.) What is your most memorable part of the show either onstage or behind the scenes? The first time I got to come out as Elsa. Hearing the kids sing and cheer gave my body goosebumps and excitement and all the nerves went away. I was just able to enjoy the joy that came from being this amazing character.

10.) Do you still continue to practice in between shows, and if so, how often? Yes, once a week.

11.) How often do you rehearse for each show? We usually rehearse once a week before the show and before each tour season we meet every 2-3 weeks for rehearsals.

12.) What inspires you to skate professionally? The audience. I love how much energy you’re able to pull from them and see the joy on children’s faces as you bring the character out onto ice. I’m so glad I can travel the world and do something I love.

13.) How do you show your DisneySide outside of the show? I loves watching movies with my nieces and nephews. It helps me remember what it was like to be a little kid, and helps me bring to life the characters on ice.

16.) If you could portray any other Disney character, who would it be? I was lucky enough to be her already, but I was Jessie, the yodeling cowgirl. I love her energy. She’s really fun to play. I would love to be Jessie again.

17.) Is it harder to skate when you’re in a costume? It’s fun to skate in a costume. Some costumes are a little hard to wear and get a bit heavy, but it’s fun. It’s just fun to put everyone on and go out there like, “This is me, I’m here and I get to show you this cool number and this beautiful dress I wear.” There’s new challenges every day!

16.) What is your favorite city on the tour so far? Christchurch, New Zealand (and really, I loved the whole country of New Zealand). I’ve always wanted to go to Prague and loved looking at photos of it while I was growing up, so I was really happy to see it when we were touring Europe. Christchurch and Prague have definitely been my favorites so far.

17.) What do you think children will most enjoy about this show? Seeing all of their favorite characters. Even as an adult, it’s fun to be like, “There’s Rapunzel! Or There’s Mickey Mouse! And they’re so close I can almost hug them!” The fun pirate battles are also great. The singing between Anna and Elsa and watching Ariel and Flounder… There’s just a lot of really great aspects of the show.

18.) What do you think adults will most enjoy about this show? For me, I’m reminiscing about watching all the characters from the shows. I loved Lion King and Peter Pan and it’s fun to see them again and remember watching movies as a kid and think, “Mom can I watch this one more time?” Now they’re right in front of you, and it just takes you on a trip down memory lane.

19.) What would you say to someone with boys who think that a show with princesses or who views figure skating as “girly” to encourage them to come to the show? Come and see Captain Hook battle Peter Pan! They’ve got crazy pirates and it’s just as exciting for boys as it is for girls. It’s fun to see all of the fish swimming under the sea. My little nephew loves coming to watch Captain Hook battle Peter Pan. There’s the big giant Ursula, and the eels. It makes it exciting for more than just little girls, but it still is exciting for girls to see Nala, Wendy, and Tinkerbell…. there’s just a lot for everyone.

20.) Is there anything else you would like our readers to know about the show or being involved with “Passport to Adventure”?  “Passport to Adventure” is fun and is different from the other stories because it has some of the princesses, but it also has Small World, Peter Pan, and Lion King, so come and see it! We’d love for you to join us! 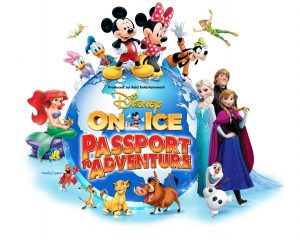 So there you have it. A big thank you to Angie Lien and Feld Entertainment for graciously taking the time to answer our questions so we could share them all with you. I know my family is eagerly awaiting to see the September 23rd performance of Disney on Ice presents Passport to Adventure. Don’t have tickets yet? Click here to enter this week’s giveaway to win a four pack of tickets for the September 23rd 7pm performance at the Santa Ana Star Center in Rio Rancho, NM! Need more tickets, or want to see it on one of its other performances in RIo Rancho on September 24th or 25th? Get $5 off the $20 and $25 tickets by using the code: PASSPORT . Good luck and enjoy the show!

Disney Diva Disclaimer: All images in the article are property of Feld Entertainment, and are only used for promotional purposes. All images in this article have been used with permission.