I recently had the opportunity to attend the Disney on Ice Worlds of Fantasy presented by Stonyfield YoKids opening night show at The Arena at Gwinnett Center. This was my first time attending an ice skating show of any kind, and there’s no better way to break me into it than with a Disney on Ice show! My husband (a fellow Disney addict)and two sons went with me. I’m pretty sure I can sum up my first time experience with three words…FAN…TAS…TIC!! This show was two hours of exciting, fun and graceful entertainment that it will keep anyone of any age engaged. My sons, who are 11 and 14 now, even enjoyed every second of it. 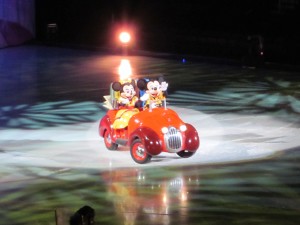 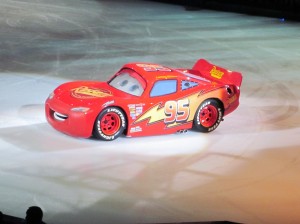 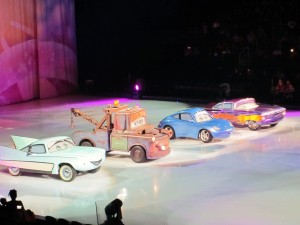 Disney on Ice World’s of Fantasy opened with none other than Mickey and Minnie going for a drive, and suffering a car breakdown.  Donald, Daisy and Goofy even come out and attempt to help get the car started, with a lot of laughs at Goofy’s silly antics, but to no avail.  They exit the ice rink to search for anything that will help them start the car, and that’s when the excitement really starts.  Out comes Tow Mater, joined by Sally, Flo, Ramone and of course, Lightening McQueen.  Working together, they get Mickey’s car started again and head back to Radiator Springs.  It was so exciting to watch all these cars spinning around in perfect tune with each other while on ice.  Mickey and the gang then come back to happily find a now working car. 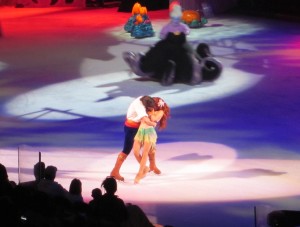 This transitions you under the sea with the beautiful Ariel and her friends, Flounder and Sebastian.  The storyline for this particular bit of fantasy stays true to The Little Mermaid movie, complete with the evil Ursula.  Prince Eric starts out on land, searching for the face which belongs to the beautiful voice he has heard.  Alas, as you know, Ariel cannot speak until she can get Prince Eric to kiss her.  This leads into Sebastian singing Kiss the Girl while Ariel and Eric skate gracefully to the music.  Several gorgeously costumed sea creatures join Eric and Ariel on the ice as they swirl and jump, and of course, Eric finally kisses Ariel.  this is when we see the end of Ursula the Sea Witch. 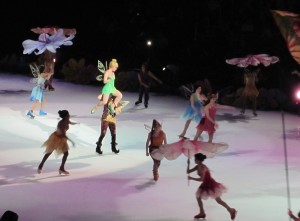 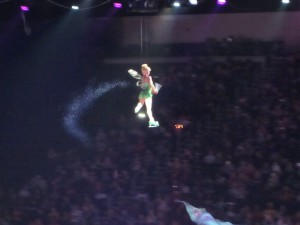 Much to the delight of the entire audience, a beautiful fairy queen, Queen Clarion, enters from the air, flying above the rink, which leads us into Pixie Hollow.  She introduces the cute and spritely Tinkerbell to several other fairies.  She tells Tink that each fairy has a special power.  Tinker Bell then meets Vidia, the Spring Fairy.  Vidia is responsible for bringing all the plants to life and bringing spring about.  Vidia also taunts Tink a little, prompting her to attempt to bring spring about herself.  Unfortunately, Tinker Bell gets herself, and Pixie Hollow, into a thorny situation (with skaters costumed as thorns chasing her and trying to take over Pixie Hollow.)  As she skates and dances with Terence, the Dust Fairy (pixie dust), he helps her realize that instead of being jealous of other fairy powers, she should be proud of the powers she herself possesses.  After Pixie Hollow is saved, there is a brief intermission. 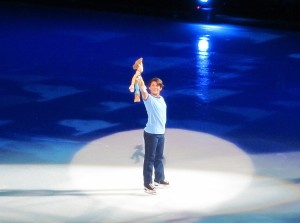 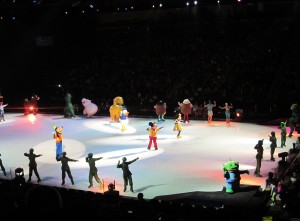 As we come back to the show, we see the Toy Story movies come to life with Andy packing his toys before he goes to college.  He plays with them one last time before deciding to box them up for Sunnyside Daycare.  The toy soldiers begin marching around (or skate-marching)with amazing unison, preparing for the entrance of Hamm, Slinky, Mr. & Mrs. Potato Head, Rex, Jessie, Bullseye, Barbie, Buzz Lightyear and Woody.  The costumes were huge, adorable, and we were all amazed at how gracefully the skaters moved while wearing them.  The entire second half of the show was dedicated to the Toy Story 3 movie, and we loved every minute of it.  No detail was left out, from Barbie and Ken’s beautiful dance together,  Ken’s theatrical and hilarious costume changes, Lotso’s attempts to trap the TS3 gang in the toddler room, Woody’s plan to break them out, and finally, those cute little aliens coming to the rescue with the claw, which grabs and drops Lotso into a huge hand, belonging to Sid, who grabs him to put him on his garbage truck.  As the show ends, Mickey and the gang come out one last time, joining the Woody and his friends for a final dance skating number, meeting with thrilling delight from the entire audience.

In my opinion, I LOVED that each part of the show stayed true to the original movies and characters.  The excitement of Cars characters zooming over the ice was balanced by the grace of Ariel and Tinkerbell gliding and spinning.  The constant music used throughout the show was music used in the original movies and everyone loved singing and dancing along.  The humor from the Toy Story 3 scene was a great way to end the show.  As I stated before, this is a show that will be enjoyed from ages one to 100, and no part of it will disappoint you.  If you are fortunate enough to have Disney on Ice Worlds of Fantasy come to your town or state, I highly recommend you grab some tickets, which you can order online here, for the whole family and enjoy a great family night together!  And remember, if you use offer code “MINNIE”, you can save 40% on all weekday performances and 20% on all weekend performances!

**Disclaimer: I am a Feld Family Ambassador, in exchange for my time attending and reporting my opinion of shows on this blog, as well as reporting to you the latest discounts offered, Feld Entertainment has provided me with complimentary tickets to Feld shows and opportunities to attend private Feld pre-show events.  Though I do receive these benefits, I ALWAYS give an opinion that is 100% mine.