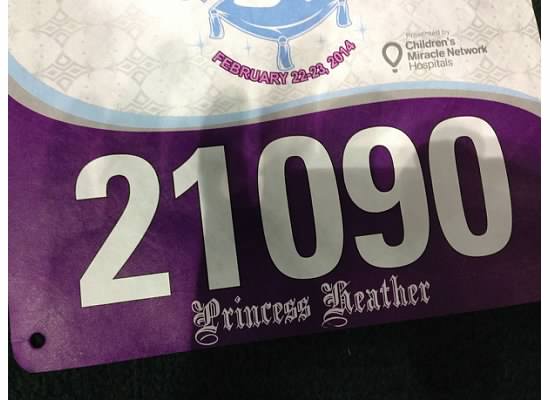 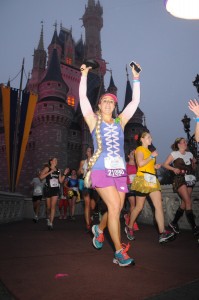 I just returned from my first Disney racing experience—Princess Half Marathon Weekend.  Runner, walker, couch potato—makes no difference.  If you are a Disney fan, this must become one of your bucket list items!  I have been running for about 7 years, so I decided to be brave and attempt the Glass Slipper Challenge.  This entails the Disney Enchanted 10K (6.2 miles) on Saturday and the Florida Disney Princess Half Marathon (13.1 miles) on Sunday.  I learned after signing up that it was the inaugural year for both the 10K and the Glass Slipper Challenge, so I was even more stoked.

We arrived at Disney on Friday morning, checked into our hotel and then headed to the Fit for a Princess Expo to pick up my race packet.  The expo itself was pretty packed, so we decided to skip it so that we could get to the parks.  BIG MISTAKE!!!  One I still regret.  Throughout the weekend, I kept seeing adorable New Balance Disney-themed shoes, precious t-shirts (my favorite was the one that said “My Favorite Disney Princess is My Mom”), and other things that were only available at the expo.  I got on eBay to try and find some of the items, and the shoes which sold at the expo for around $125 were already going for $250!!!  So, don’t be an idiot like me…GO TO THE EXPO!!! 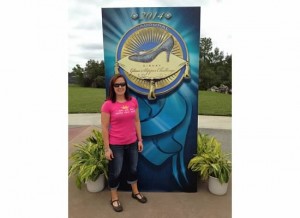 Another regret that I have is not signing up for the 5k too.  The 5k (3.1 miles) is run on Friday morning, so if you aren’t quite ready for the 10k or half marathon distance, the 5k is a great place to start.  There are a ton of Couch-to-5k programs out there you can follow to train.  It honestly never crossed my mind to sign up for it.  And, if you have not been running for long or if this is your first big race, I do not recommend doing all three and maybe just picking one, to begin with.

The 10k and half marathon started super early—5:30 AM, so we got back to the hotel Friday night at a decent time so that I could get some rest before Saturday’s 10k.  We stayed at the Pop Century Resort, and I set my alarm for 4:00, which gave me plenty of time to get up, get dressed, catch the bus to Epcot, and get to my corral.  In fact, I had some time to spare.  The 10k was a lot of fun.  Fairy Godmother started us off with her magical incantation, and we were off on our magical journey.  Along the path were plenty of water stops and restrooms as well as tons of character spots, live music and Disney-themed displays along the route.  I don’t think I went more than a half-mile without coming across something, which made the race go by super fast.  The best part of the race to me was getting to run through the entire World Showcase at Epcot.  All of the Cast Members were there cheering us on as we ran this last leg of the race.

The next day it was time for the half marathon.  I had developed plantar fasciitis a few weeks before the race, so this is the race that stressed me.  I set my alarm for 3:30 AM so that I would have plenty of time to get there.  But, my alarm didn’t go off.  I happened to roll over and look at the clock at 4:05.  I shot out of bed panicked and started throwing on my Rapunzel costume.  I got half of it on, had the other half in my hand, and took off for the bus.  Luckily, they had buses coming constantly, so I still got there in plenty of time.  Once you get to Epcot’s parking lot for the race start, you have about a 20-minute walk to the actual starting line, but it was a good warm-up.  Fairy Godmother started this race as well, followed by a mini display of fireworks.  I can’t say enough good things about how amazing this race was.  There were multiple characters stops—Disney heroes, Genie, Villains, Buzz Lightyear, Mary Poppins with Bert and the Penguins, Captain Jack Sparrow with his ship, and so many more.  There was also great music along the route.  Besides meeting Flynn/Eugene, I had two favorite things along the race path:  One was at the beginning (and again at the end) they had people flying kites over the runners while “Let’s Go Fly a Kite” played.  The other was Sarge (army man from Toy Story).  He was towards the end of the race at one of the hills “pushing” people on.  DO NOT STOP ON THIS HILL.  He will make you stop and do push-ups or sit-ups. 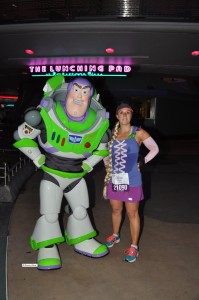 I cannot stress enough the importance of a Disney race being on every Disney fan’s bucket list.  With three distance options, there is something for every running level.  And, there are also numerous people that walk in all three races, so don’t fret if you aren’t a runner.  There is; however, a minimum pace requirement that you must meet or be “swept” (they pick you up and you are not able to finish).  But, the minimum is attainable even when walking.  Both races that I participated in were incredible experiences, and the “bling” wasn’t too bad either. Each of the races had its own unique medal and there was also a special medal for the Glass Slipper Challenge which was very cool.  So, I ended up leaving with three shirts and three medals, not to mention some wonderful life long memories and even a new friend!!! 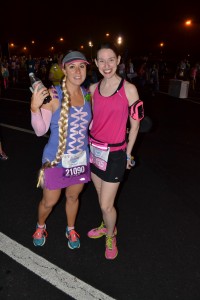 Below are a couple of race peeves and numerous race tips for those of you considering a Disney race:

Don’t Lie.  When you register for a Disney race, you have to certify your time so that they know what corral to put you in.  They “corral” you based on your speed.  Please, please don’t lie on this.  I was in the first corral for the 10k and there were TONS of walkers in this corral with me.  There is absolutely nothing wrong with walking.  But, if you are a walker you should not be in the first corral.  It makes it very difficult for the runners to get through.

Don’t span across the entire course.  Often you come to the races with a group of friends to run with, which is awesome.  Please do not get 6-across on the race route.  It makes passing extremely difficult.

DRESS UP!!  I cannot stress this enough.  I dressed as Rapunzel, and it was so awesome to have people constantly screaming “Go Rapunzel!” along the route.  And, don’t just put on a tutu or glitter skirt, dress as a recognizable character.  It makes the race experience so much more fun.

Don’t miss photo ops.  I did not stand in line for many pictures, but I did stop and at least snap some cool ones along the way.  And, because the race is a down-and-back, I was able to see some of the same characters on the way back as were there on the way, and the lines were shorter (WARNING:  They are not there all day, so if you are in a later corral, don’t bank on this).  With the shorter lines, I did stop to get my picture with some of them. 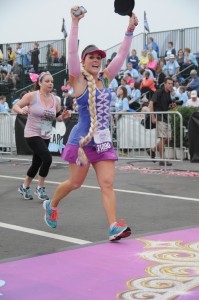 Don’t over-train.  Because I stopped so much (no more than 10-30 seconds at a time), it made the race very easy for me.  So, if you are a serious runner and plan on getting lots of pictures, don’t stress so much about training, because you really don’t need it.  The little 10-30 second breaks really helped to make the race easy, and I still had a decent (albeit not my best) race time of 2 hours and 24 minutes for the half marathon and 55 minutes for the 10k.

Dress appropriately.  Check the humidity.  It was insane for the 10k, and I was not prepared for it.  I wore capris when shorts would have kept me so much cooler.  If it is going to be cold, be sure and bring a jacket you don’t mind losing.  Maybe go to the thrift store and purchase one before you go that you can drop it on the race track.

For Non-Runners.  Because the races start so early, things get noisy at the hotels with doors opening and closing and people knocking on doors around 3:00 AM.  If you are not running, I would highly recommend bringing some kind of sound machine or downloading one on your smartphone to drown out the noise.

Buy the Discounted Pictures.  Before the race, you will get an email that offers you a discount on the pictures.  I did not buy this because I figured I would take enough pictures myself, and it wasn’t worth the money.  When their professional pictures came back, I absolutely had to have them.  The picture they take when you are running out of Cinderella’s castle is worth every penny.  So, buy them when they offer a discount.

Find Photographers.  Look for the photographers along the path and be sure that you make your presence known so that you will have lots of pictures at the end.  You will likely buy a download of all your pictures, so the more you get, the cheaper they are per picture.

Don’t go for a PR!  This is not a race to run for a personal record.  Don’t worry about your time.  Just worry about taking it all in and having fun while you are doing it.

Register Soon.  rundisney.com is your hub for all Disney races (both Disney World and Disney Land).  Make sure you check to see when registration opens and put that date on your calendar.  The races fill up quickly, so you need to register as soon as it opens. 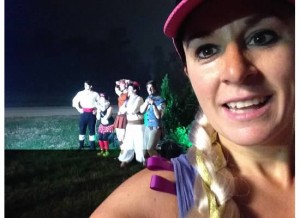 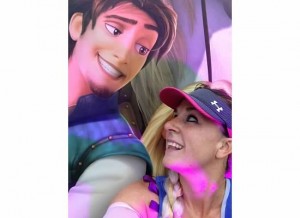 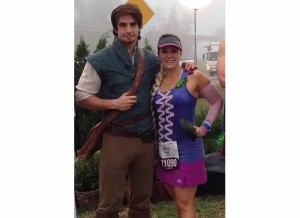