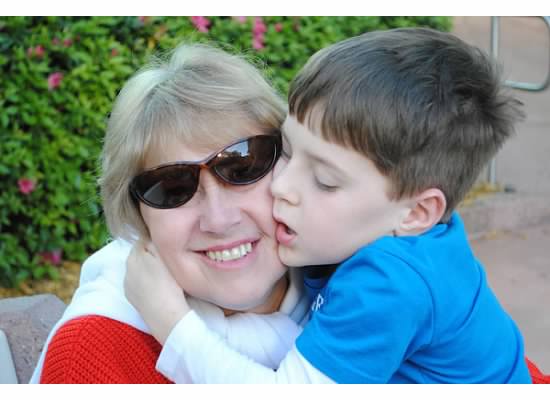 A few years ago for Christmas my parents took our whole immediate family (6 total people) to Disney World. It was going to be my son’s first trip, so we were so excited. Lucky for us, they have done it every other Christmas since then! When they take us we stay for an entire week. We typically go during the off season when they run the free meal plan, so that we can take advantage of that. We have to pull our son out of school for it, but given the money savings of the free meal plan and complete lack of crowds, it is well worth it to us.

Besides the obvious–a free trip to Disney–there were lots of advantages to them going. When my son Bryce was younger it was a huge advantage to have the grandparents handy for the “big” rides that he wasn’t quite big enough to ride yet. Now, my parents will ride anything, but they are also just as content to hang about with Bryce and let us ride. They would take him to do something he could do or just sit and wait for us to get done. On some rides, especially Everest, he loved watching all the carts go down the big hill and trying to find the one we were in. 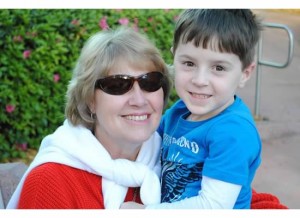 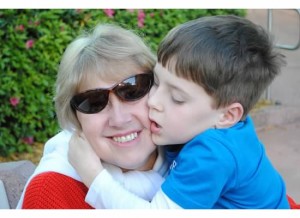 My parents are not slow walkers either–especially not my dad.  We have to slow him down just so we can keep up.  The only reason we were slowed down at all was simply because we were a larger group or my mom was so afraid she was going to miss something Bryce did that she would stop to see it–typical grandmother behavior.  However, if your grandparents are not as agile, don’t be discouraged.  They have wheelchair rentals at all the parks and the resorts, and they are very reasonable.  We actually had to rent one for my husband one time because he got really ill while we were there (Click here for my article on it).  I worried that it would be a hassle to keep up with, but I could not have been more wrong.  But, don’t think Grandma is going to get you to the front of the line.  Disney has very strict rules about bypassing the lines, and simply being in a wheelchair does not qualify you for it. 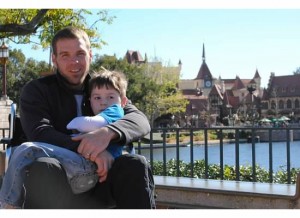 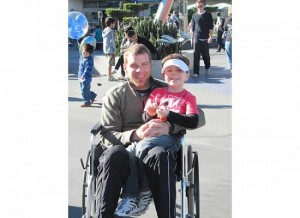 Another advantage was that they had a separate room.  So, if you and your spouse wanted some alone time, you can always let the kiddo(s) spend the night in the grandparents room for the night.  We always have connecting rooms, so he could walk back and forth between our rooms if he wanted.  But, at night, we could always close the door!  Honestly, I would actually prefer non-connecting rooms, because then you actually have a little privacy.  Bryce likes to go back and forth between the rooms constantly, which makes getting showers and dressed in the morning quite exciting.  Most rooms have a privacy curtain to set off the dressing area, but I prefer to get dressed in the room away from the humidity of the shower.

BIG ADVANTAGE – You can actually get a family picture.  We never splurge for any of the pictures at Disney or even the new memory maker.  We always take enough pictures on our own.  But, it is hard to get family shots.  I usually have a ton of pictures of my husband and son, and I am in none of them.  Having the grandparents, especially one as shutter-happy as my dad (not the camera handy in the picure below), we always have plenty of family pictures. 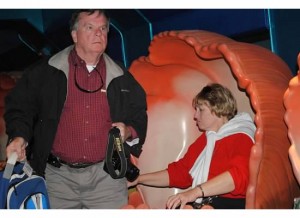 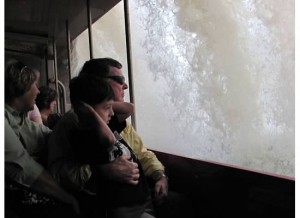 Bryce is one of those kids who has to show you everything–even though it is highly unlikely that you would miss it in the first place.  This can get quite exhausting as a parent.  But, grandparents typically love it.  So, he often rides with them so that he can “make sure they don’t miss anything.”  The backlot tour is one of his favorite things to ride with PawPaw because he can point out all the vehicles, and he loves the action sequence where all the water comes flooding down.

We’ve never actually done this, but my mom would gladly take Bryce back to the room and let him nap while the rest of us stayed and played.  Bryce does not require a lot of sleep and isn’t a napper, so we never nap at Disney (The Disney Diva is going to kill me for this one :))  But, if you do have nappers, often grandparents wouldn’t mind resting either, so they can take them back to the room for a nap while you stay and play.  This could also come in handy when the parks are open late.  Little ones and grandparents may want to cut out earlier, so you can stay and play, while they had back to the room.  Again, never done this as Bryce can typically hang with us until the wee hours of the morning, but it could definitely be advantageous.

Probably the biggest perk is just the quality time you get to spend with them.  The memories you make at Disney truly last a lifetime.  Even though Bryce was barely four on his first trip, he vividly recounts parts of that trip that none of us even remembered.  And, it is so nice that his grandparents are included in those memories.