Disney World is not a Fashion Show, Packing Tip! 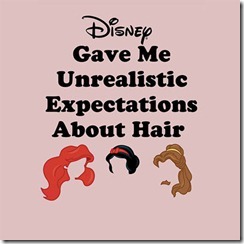 I am convinced that the primary reason why Walt Disney chose Orlando as the spot to build Disney World was to guarantee that no other women would be able to look as good as his Princesses. The design of the park only adds to my belief.

1) The Humidity. The humid air is so terrible that it makes curly hair frizz and straight hair lay limply on the head. This is part of why people will pay an astronomical amount for hats in the park. So bring a hat. I was just looking through my photos to find a picture of my hair looking really crazy (its curly and turns into a lions mane at WDW, seriously husband calls me “MUFASSAAAAA” while we are there), but I couldn’t find one because I have a hat on in every single picture. lol

Notice that every single Disney Princess in the park has on a wig. You will never see one in their own hair, even if it matches exactly. Why? Because the humidity would never let it look as perfectly coiffed as all the cartoons have led it to be.

The humidity also turns your make-up into a thick cakey mess and makes mascara run. The heat + makeup usually results in some not so friendly pimples popping up to say “howdy do”, thus REALLY ruining your photographs. Less makeup is better at WDW!!

2) The Pop Up Rain Showers. Like the humidity, the rain showers are guaranteed to reek havoc on hair at Walt Disney World. Leaving all women completely unable to compete with Ariel’s curves OR her hair. Again, hats & visors are a staple of any WDW fashionistas repertoire.

3) The Pavement The never-ending stretches of pavement across the parks make wearing glass slippers completely unrealistic (though some women are still dumb enough to wear high heels in the park). The pavement requires sensible footwear! IF you’re not sure what that is read my post about “Hoofing it around WDW”. Athletic shoes and sneakers are a MUST for WDW, even though they can’t compare to the sweet heeled boots you’ll see Mary Poppins sporting.

4) The Delicious Food. Disney is known for its extreme amounts of tasty treats!! The delicious food calls to you throughout the day and even though you are walking 6-13 miles a day you still will gain weight if you’re not being really careful about what you eat. So I always bring a pair or two of pants/shorts with elastic waist bands for the LAST few days of the trip to deal with the water weight gain from the trip. Many people complain of gaining as much as 7 lbs over the course of their week at WDW. Especially people who stick to the burgers/ fries/ icecream diet at WDW. Everybody knows a Princess always keeps her figure, (especially now because the tabloids would have a field day with her!), so how can the average WDW visitor compete?

Disney is built for fun, but not for fashion!!

So remember some of these key items to bring on your next WDW trip so you’re not “cropping” yourself out of every photograph or just not printing the pictures all together (as moms have been known to conveniently do when they look terrible in all the pictures).

Just get ok with the FACT that the Princesses are going to be the prettiest in the park and go have fun with the family!