I recently got a question from Rita who asks:

“Hi disney diva!I am so glad I found your site! I’m finding a lot of great tips, idea’s and advice here!! So my family of 3 kids(9,5&16months) and us parents plus some family and friends are taking our first trip down july 1st of this year..we are staying outside of disney world at bahama bay resort and will be doing 4 days at the parks and 1 at the water park.. I noticed your “park planners” are park hopping from park to park each day, however we wanna spend one full day at each park. Can you give us some plans/ideas of how to spend our days? (We have reservations for bippity boppity boutique monday morning and plan on staying at magical kingdom for that day, the 4th-plus its both my daughters’ bday that day) and we also have reservations for chef mikey’s dinner on the 5th, and ashkarshus in epcot on the 3rd for lunch! Thanks, and looking forward to reading what you have to say ;)”

First off, Rita Thanks SO much for reading and writing in to me. I am always glad to see that my posts are helping people (although I’m obsessed enough I feel sure I would be babbling to myself even if you weren’t).

Your question is actually a two-part question so I’m partially using it as a venue to discuss the difference between the two types of park tickets and why I prefer one over the over, then I’ll talk to you about some things you could do. 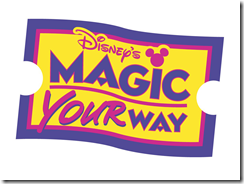 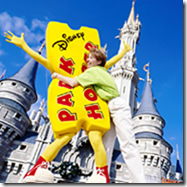 Let me first of all direct your attention to my FAVORITE place to buy discounted tickets online. Undercover Tourist http://www.undercovertourist.com . I trust them implicitly, have never had problems ever with them, they do fast shipping and great customer service. I’m also writing this about them WITHOUT any benefit to me (as in they don’t give me free tickets or deeper discounts or anything.) This is just one mom saying to other moms and dads, “This is a quality business you can trust when buying discounted tickets”. I’m using THEIR prices to show the differences between the two types of tickets (as of May 25, 2011, prices subject to change).

This is obviously a significant amount if you’re doing Disney on a budget. For a family with 2 adults and 3 children Rita is saving herself about $267 (actually less because she won’t have to pay for her 16 month old).

If it costs so much less why buy the park hopper?

One word, convenience. Like most anything associated with Disney World the convenience is what you’re really paying for. The Deluxe resorts are nice, but they’re not hundred dollars a night nicer than a Moderate… what you’re paying for is the MONORAIL LOOP and the ability to walk to EPCOT. (and for Animal Kingdom you’re paying to see the animals in the morning, which in my opinion is sooo not worth the cost because AKL is majorly removed from EVERYTHING else!)

For some families you can finish Animal Kingdom and Hollywood Studios by late lunchtime. Then what do you do the rest of the time when you’re limited to that one park for the day by your Magic Your Way ticket? You waste time doing lame rides and shows you didn’t really care about because where else can you go? This is particularly the case when you have kids that are either too young or WONT ride the big rides that are time eaters at HWS (Tower of Terror, Rockin’ Rollercoasters) or you don’t care about doing all the walking tours/conservation station at Animal Kingdom.

**So really what you’re paying $13.50 per person a day for is the ability to go somewhere else when someone says “I’m bored” or Animal Kingdom closes early (which it does every day) OR if you pick to go to a park one day that is just (in my husbands words) “GOSH AWFUL COVERED UP (aka really full with people)” you can leave and go somewhere else. Plus it is, in my humble opinion, impossible to do Magic Kingdom in a single day and really feel like you’ve enjoyed it and “seen” all the classic rides. ***

Pay the extra money to have a Park-Hopper Pass. It breaks up the day, it gives people something to look forward to if they are not enjoying that particular park, and it gives you an out if your park is too full. The Diva’s usually return to Magic Kingdom each evening because to us it “IS” the “REAL” Disney World.

Second part of your question

Ok, all that being said, Rita, you’ve most likely already picked and paid for your Magic Your way ticket, so it “Is what it is” (as my husband says). And you will still have a magical time!!! Instead of thinking of your day in parks like my other daily plans show, instead you need to divide the park in HALF and do HALF of the park in the morning, then eat lunch and do some cool-down/ rest (read Quiet places to rest and nap in WDW) before heading to the other side of the park. You need to really be intentional about taking at least ONE HOUR in the middle of the day to just sit, cool off your sweaty feet, and give your legs a rest. That is if you want to avoid a full-on meltdown. And since you, Rita, are staying off property I’m assuming that means you’re not planning on going back to the resort to take your mid-day nap as the Diva demands.

It’s really important that you pick your parks for the day based on crowd level estimations for each day. I would highly recommend you look at www.touringplans.com and their crowd calendar to plan your dates. They are AMAZING!

It looks as though for the three days you mentioned:”

July 3rd that crowd levels throughout WDW are at a 9/10. Best park is Magic Kingdom and park to avoid is Animal Kingdom

July 4th crowd levels throughout WDW are 10/10 (the most full they can be) Best park for the day is Hollywood Studios and Parks to avoid are Magic Kingdom and Animal Kingdom.

July 5th crowd levels are also at 10/10, best park again is Hollywood Studios and park to avoid is Epcot (though I’ve never seen Epcot legitimately crowded because it is so large).

This causes a problem because your current plan has you in the busiest parks on their busiest days. There is really not all that much time left to revise your dining reservations either so there are a few things to keep in mind.

1) There is no way that if you stay in MK on July 4th you’re going to get everything done that you want to. Get ok with that and sit down with your family to ask them what they have as their TOP rides and make them rank them. I am hoping against hope that your breakfast reservation is actually before park-opening, as is your BBB appt) because you need to make a BEE-LINE for Fantasyland AS SOON AS the rides officially open. You need to do Dumbo and Peter Pan ASAP or you wont be riding those rides period. Dumbo is a slow-loading ride and has no-fast pass and Peter Pan gets insane quickly too. After that you need to have a decision about whether you want to do Space Mountain or Splash Mountain and send someone after those fast passes while you move the family that direction.

2) Be standing AT THE GATE for park opening. Especially with being off property and the crowds being so big, getting TO the park on the trams is going to be one hot-mess! It is imperative that you are standing at the gate for the opening ceremony each day. Also make sure you know which parks have extra magic hours as your MYW ticket doesn’t allow you to be in there during those times and gives those people an extra HOUR sometimes in the morning before you can even get into the park.

3) Read my post on Avoiding WDW Time Pitfalls and do everything I tell you in it.

I had another one my husband made me delete because he didn’t think it was relevant. Believe it or not he’s even more of a Disney nerd than I am.

However it works I’d do:

Magic Kingdom : Morning: Fantasyland/ Tomorrowland Evening: Frontierland/Adventureland/ Liberty Square. (depending on if pirates of the Caribbean is more important than buzz light year space ranger spin for example. That’s really up to your individual family) Tomorrowland at night IS a lot of fun.

Epcot: Straight to Soarin’, then Test Track. Morning: Futureworld. Evening: World Showcase (Kim Possible is really fun and your 9 year old will love it. Great way to see the countries for you and fun for the kids).

Hollywood Studios: RUN to Toy Story Mania. After that it just depends on whether you’re more interested in Star Wars or Rockin Rollercoaster/ Tower of Terror which side of the park you start on.

Animal Kingdom: Safari or Everest depending on which is most important to you. Check shows plan around that for the rest of it. AK Closes at 8 each night during that time of the year.

Unfortunately planning is highly individualized based on what the interests are of your particular party. So really let the fun part begin now by getting out maps and letting your family pick out which are their “must dos” Then check them against my other touring plans to decide which need to be done earlier in the day. USE FAST PASS!! USE IT CORRECTLY!!!

I hope this has helped you some Rita, if you would have asked me earlier I would have screamed “No, dear God, avoid WDW around major holidays at ALL COSTS!!!!” But I know you will still have a great time and I hope you will come back after and tell me how much fun you had!