DisneyBound. Sounds very strange, right?
Well DisneyBounding is where you take a Disney Character, and modernize it through clothes, make-up, and accessories. There are many ways you can DisneyBound, from a very traditional and obvious looking “bound”/outfit, or you can make it not as obvious. There are multiple ways to DisneyBound through just showing the colors of the character, to certain patterns that can remind you of a character. A pattern you could do is say like an apple dress for Snow White, or a bow and arrow for Merida. Those are very common. In this article, I’m going to give you tips on how to do a very obvious DisneyBound outfit, a sort of recognizable outfit, and ones that most people won’t recognize. 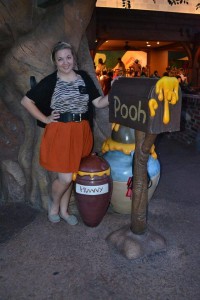 obvious, or not so obvious.

Starting with the “Obvious” Disney Bounds was Tigger. I did an orange dress and a tiger print shirt on top. I added the cardigan because it was in February at night, and it became a little chilly. People were commenting on this all night because this was a definite “Oh! Yes!” What made this so obvious was the color and the pattern, which most people can recognize Tigger from a distance in his coloring and by the fact that he is a plush tiger who comes to life. 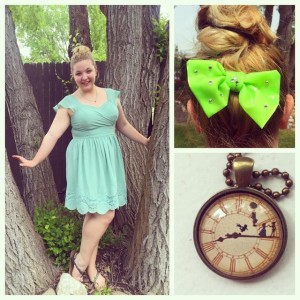 you could guess? Tinker Bell! I love Tink, because she is cute, fun, sassy, and full of pixie dust! The wonderful thing about Tinker Bell is that she is so easy to bound with because of how simple her look is. The simpler the look, the less you have to add to make it look like the character. I also had my hair up in a high bun, to look just like Tinkerbell. I finished it off with a sparkly green bow, and my Peter Pan watch necklace. I wore the bow because I thought it was cute, and it’s sparkly like Tinkerbell reminds me, and the necklace because it’s a nod to the movie.

These are very easy DisneyBounds because the characters are very recognizable, and I themed my look to look just the characters would, but with a modern twist. I usually find the easiest way to DisneyBound is to find a character you love, find basic colors/patterns, and start mixing and matching these outfits. The easier characters have more obvious colors like Tinkerbell, or Snow White with where the colors are placed. The harder characters are more towards the one’s with a lot of different colors and texture’s on their costumes.

The next DisneyBound I chose was the “subtle but not extremely obvious”. This kind of DisneyBound I notice more when the character has an interesting color blocking, or lot’s of patterns. For example, I chose Rapunzel, and this was my Dapper Day look (aka the gloves). Rapunzel, to me, has a very strange color blocking with the light pink top, the pink sleeves, with the purple skirt, and light pink in the center of the skirt. Then you add the corset, lace, all the embroidery… Her dress has a lot to it! But she is one of my favorite characters, and I knew I wanted to DisneyBound! With this bound, the pink dress and purple cardigan was what I had, and it looked closely enough to her colors. I also braided my hair, put flowers in it (not shown), and carried around the green flowers, to look like my own little Pascal. Between my hair, and the colors, people were recognizing it, but it almost had to be a trained eye for DisneyBounding. 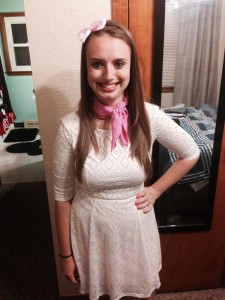 Another example of a fairly subtle, was from our friend, Wishes Diva, who did a Marie bound from the Artistocats. Marie is the little white kitty who has a big pink bow on her collar and in her hair. While this bound is spot on with the white dress, the pink around her neck, and pink bow in her hair, a lot of people don’t recognize Marie and probably have to think about this by saying “Who is white and pink?”

So, as you can see, a fairly obvious bound can be the color blocking, the way you do your hair, or just if you pick a not as popular character. The more popular the character (say Frozen) the more recognizable it will be compared to something like Robin Hood. 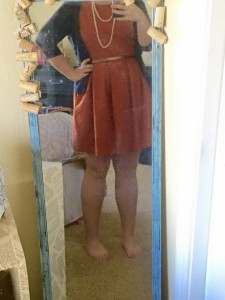 Our final DisneyBound is where it really is not obvious… At all! These are one’s (for me at least) I put on an outfit that I think is cute and I look at it, and I’m like… Hey! It looks like (enter character here). A lot of the time, this is because the colors are kind of harder to match, or the character has a lot of different elements to it. For example, in the picture on the left… it’s Hercules! (No, not Hunkules!) Hercules is a character that isn’t as common but with the gold belt, and the blue cardigan, it can come off as Hercules. I find myself wearing bounds like this all the time because I just put an orange dress on and a white cardigan and I’m like “Oh! It looks like Nemo!” But it’s really just some colors of a character.

All in all, DisneyBounding is about having fun and letting the inner Disney fan inside of you come out. I know I wish I could dress up in a cute little Princess dress and go to the park, but that’s not allowed. Through DisneyBounding, I can still feel like the pretty princess!

One thing to remember, is that the only rule is you don’t come out in a Halloween costume and say it’s DisneyBounding. That’s cosplay, completely different. Other then that… There are no rules! You can do whatever you want with it. Have fun, be free, and do whatever you feel happy and comfortable in. Cinderella wears running shoes? Sure why not! There are many ways to DisneyBound through athletic clothing, vintage, formal, steampunk, or just every day clothes.

Like I said earlier, have fun and be comfortable, because this is for you. Happy Bounding!