Undercover DivaBy day, the Rivers of America are a tranquil and inviting, urging children to come play on Pirate’s Lair on Tom Sawyer Island or for a peaceful ride on the Mark Twain. But at night, the water and the island transform as Mickey’s imagination runs wild in a battle between good and evil in Fantasmic!
Arguably one of the best shows you can see at Disneyland, Fantasmic! combines pyrotechnics, water shows, fireworks, projections and plenty of characters for 23 minutes of magical fun! The show starts off in Mickey’s imagination and continues to shape and mold through the elements until evil forces try to control him. But like any great Disney classic, good wins in the end. 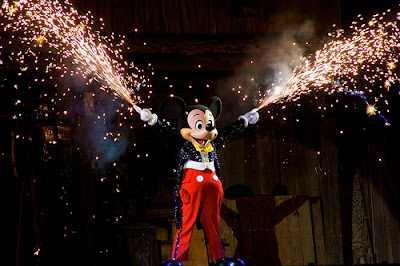 This is a must see, especially for those on their first trip to Disneyland. Personally, I think this is better than the fireworks, but it will depend on what your crowd wants to do. As a warning, if you have younger kids, there is a scary part in the later half of the show but if they have seen the movies they should be okay for the most part. The fire sometimes freaks them out too, but it is pretty dark during the “villains” section

If you are worried about whether it is better for you to watch this or the fireworks, then you can find full versions of the show on YouTube. But they are nothing like seeing the real thing. I have watched Fantasmic! every time I visit the part and it never gets old. With all the different special effects you can’t help be drawn into Mickey’s imagination and root for him, especially after all the wonderful things you see as part of his imagination. 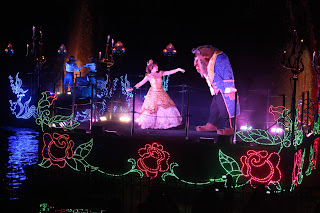 Glimpsing into Mickey’s imagination is almost like looking into Walt Disney’s imagination, with all the fun and exciting things you get to see. Not only do you get to see three of the princesses and their princes dancing on beautifully lit rafts, but you also get to see an epic sword fight between Peter Pan and Captain Hook! And don’t forget Pinocchio or the Heffalumps who just want to come out and play. All of the pieces combine are part of the Disney classics that everyone loves. In fact, it’s like watching a new movie with all your old favorites!

There are normally two showings of Fantasmic! which is nice for those traveling without kids, because you can go on a couple rides during the first show and then get a nice spot for the second. If you are traveling with kids and you want to just see this show and go home before anyone gets too cranky, I recommend either call to get reservations or getting to the show early.

Depending on the park hours the shows are usually at 9pm and 10:30pm, you can check your map when you first get to the park for the times that day. But I have seen people starting to save spots at about 5pm with one parent reading a book while the other one is off with the kids. Don’t let this scare you way, each showing can accommodate about 9,000 people, so you are sure to find a spot. And while seating may be easier at Walt Disney World, Disneyland does accommodate for handicap like they do all over the park, but it is pretty much reserved for wheelchair only. The spot is to the right of the viewing area pretty much in front of the Golden Horseshoe Saloon. I have sat her once and these seats were just as good as any other, but they can also fill up, so you might want to get there early as well. Reservations will cost you $60 per person and $50 for kids 3-9 (2 and under can sit on your lap for free) but you get guaranteed seats for the show, a desert box with tasty treats and unlimited non-alcoholic beverages. It is recommended that you call more than a month in advance, and like with any Disney reservation you can call up to 180 days in advance.
If you are going to get a front row seat to the show, I’ll warn you that there is a bit of a splash zone. While this is no SeaWorld, the water from the projections can reach the audience with barely a gust of wind. But the little mist you feel is more than worth it. Also know that there is fire used during this show, and while it comes no where near the audience, you can definitely feel the heat.
Overall, I think this is a must see, even if you have to do a little research to see if it will be okay for your kids. For the most part, I don’t think I’ve ever seen a kid to freaked out by the show and it is a great way to see a bunch of characters you can almost never catch in the park.
Share this tip!