Disneyland from A to Z 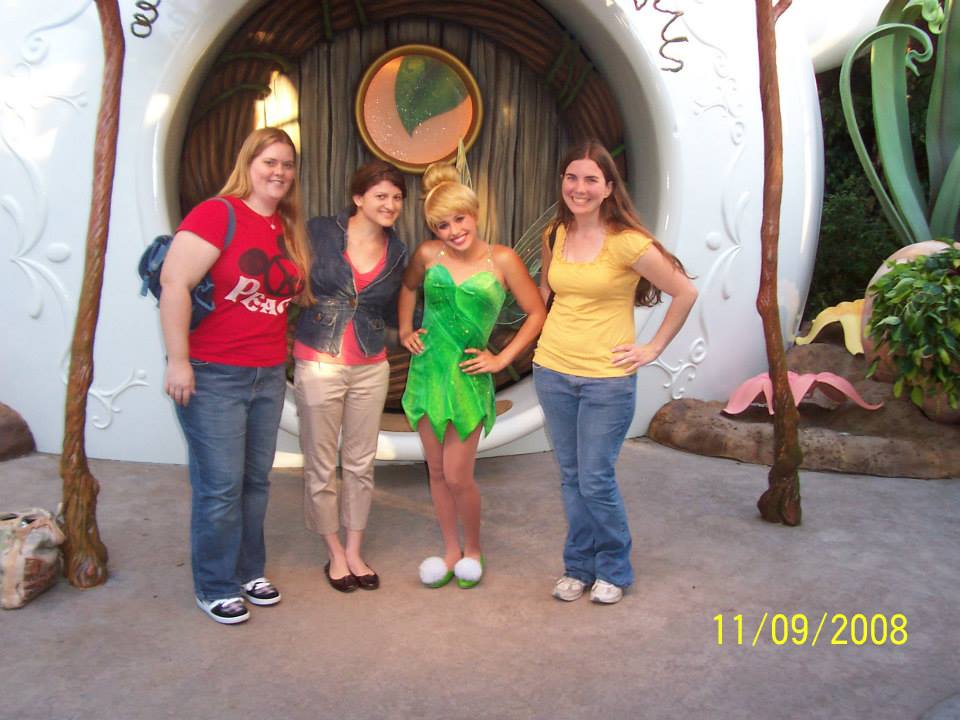 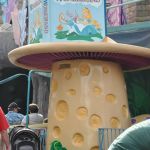 A: Alice in Wonderland– The Alice in Wonderland ride is unique to Disneyland, and like some of the other popular Fantasyland rides (Peter Pan’s Flight, Mr. Toad’s Wild Ride, etc.), it takes you through a quick synopsis of the Disney classic. It is naturally located near the teacups, and the line generally moves fairly quickly. So climb into your own colorful caterpillar and prepare for your adventure in Wonderland!

B: Blue Bayou– If you’ve ever ridden the Pirates of the Caribbean ride at Disneyland, you know that Blue Bayou is the fancy,  dimly lit restaurant where people gaze at you and everyone else in your boats as you float by. While it can be on the pricey side, it is definitely a unique experience… though fair warning, you may have “Yo Ho! A Pirate’s Life for Me” stuck in your head for the rest of the day. 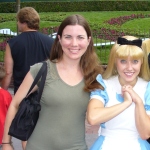 C: Characters– Hands down, my favorite part about Disneyland are the characters. The meet and greets are phenomenal! Disney Diva Tip:  Always have your video camera  ready to capture these magical interactions! And  feel free to read our character reviews on the other great character meet and greets at Disneyland, such as Peter Pan or Rapunzel and Flynn Rider. 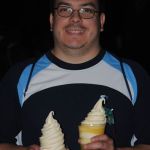 D: Dole Whip– So this is a frozen pineapple soft-serve dessert that is extremely popular. Disneyland sells two versions (the classic Dole Whip and the Dole Whip Float) over at The Enchanted Tiki Bar. 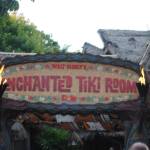 F: Fantasmic!– Fantasmic! is a popular nighttime water show, with many floats and Disney characters appearing throughout. It has been around since 1992, and is still popular, sometimes even showing twice in one night. The show lasts just under 30 minutes and is shown on the Rivers of America. Like any Disney show, make sure to get there early in order to find the best viewing spots, particularly if you are going to the first (or only) showing. Disney Diva Tip: On a side note, Tom Sawyer’s Island closes early when Fantasmic! is playing, so if you wanted to see Tom Sawyer’s Island, make sure to go early enough in the day to take advantage of that. 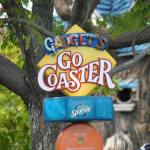 G: Gadget’s Go Coaster– Gadget’s Go Coaster is a “tame” roller coaster and is found in Toontown. While it doesn’t have the thrill factor like the other roller coasters Disneyland and California Adventure can boast about, it is a great ride for your youngsters who want a little excitement, but don’t quite meet the height requirements for the other rides. As long as they are over 35 inches (89 centimeters), they are good to go!

H: Haunted Mansion– The Haunted Mansion is a classic ride where you climb aboard your “Doom Buggy” and proceed to travel through a “haunted” mansion. A neat historical fact? While it wasn’t open for several years after the opening of Disneyland (and even a few years after Walt’s death) apparently this was one attraction that Walt had begun working on before Disneyland even opened, and he modeled parts of it off of the Winchester Mystery Mansion in San Jose, California. For those of you who visit close to Halloween or Christmas, the Haunted Mansion takes on a “Nightmare Before Christmas” theme. 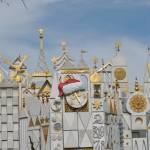 I: It’s a Small World– That classic boat ride where you climb aboard to see a myriad of dolls serenading you in that iconic song penned by the famous Sherman Brothers. Whether you love it or hate it, it truly is a classic. As an added bonus, this is one of the many rides and attractions that generally receives a holiday makeover, so if you are there around Christmastime, be sure to check out all of the special holiday additions.

J: Jedi Training Academy- This is a must for anyone who loves Star Wars. The show is great at engaging the audience, particularly children, and you may even be selected to participate in the show. My daughter (who was almost two and a half at the time) watched it, and now anytime she sees anything to do with Darth Vader she says, “Look Mommy! Bad guy!” 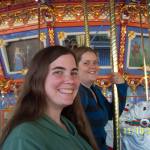 K: King Arthur Carousel– The King Arthur Carousel has been in Disneyland since its opening on July 17, 1955 (though it has been slightly renovated), and is located in Fantasyland. Walt was inspired by the Griffith Park Carousel in Los Angeles, and wanted to have a similar attraction at his park. Added bonus: The sword in the stone is located right in front, so you can take lots of great pictures of you trying to pull it from the stone. The carousel itself does not actually feature images having anything to do with King Arthur, but actually shows images from Sleeping Beauty.

L- Lockers- Have a bunch of stuff that you don’t want to lug around all day or leave in your car? You might want to consider renting a locker. They can be especially useful to store sweatshirts when it is really warm out in the day, but cools off considerably during the evenings. Locker rentals are available for $7, $10, $11, $12 and $15 per day, depending on the locker size. Lockers provide unlimited access throughout the day.

You can find the lockers at Disneyland on Main Street, U.S.A. (these are currently closed for construction), or if you are in Disney California Adventure Park they are located on Buena Vista Street. And in the Esplanade between the parks, accessible from the Downtown Disney District, lockers are located outside the Main Entrances to Disneyland Park and Disney California Adventure Park. 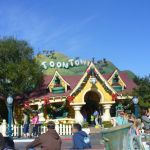 N- New Orleans Square– New Orleans Square is home to the Haunted Mansion, the Pirates of the Caribbean, and is also one of the stops along the Disneyland Railroad. While it is smaller than some of the other “lands,”  there are some very nice places to eat around here. These places include  the French Market, Café Orleans, Blue Bayou, and the exclusive Club 33.

O- Off-season– A general rule of thumb when planning any vacation (especially one that is popular with families), is that if school is out, the trip is out. Personally, my favorite time of the year to go is the fall.  I realize not everyone can travel in the off-season, and there are some perks at going at busier times, such as Christmas decorations, more characters out for meets and greets, park hours are longer, fewer attractions closed for refurbishment. There are pros and cons to going any time of the year, so you really need to decide what works best for your family, and what your “goals” of the trip are. And if you need any help, or just want extra advice, feel free to surf our site, or ask our beloved travel agent, Patricia Payne. 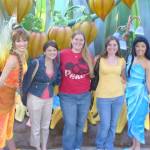 P- Pixie Hollow– Pixie Hollow is where Tinker Bell and all of her fairy friends live and hang out. All of the fairies are known to make appearances, but you never know exactly who will be there and when. Disney Diva Tip: For any character meet and greet, it is always best to check with a cast member who can give you the best tips for increasing your odds of seeing specific characters, and they will also let you know who is available that day. 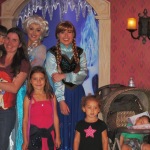 Q- Queen Elsa and Princess Anna Meet and Greet– Everyone knows Queen Elsa and Princess Anna are the most popular thing to hit Disneyland since the invention of the Dole Whip, but of course that means longer wait times. Disney Diva Tip: Disneyland has recently added Fastpasses for the Anna & Elsa meet and greet, and they no longer have a “standard queue” for meeting the royal duo, so when the Fastpasses are gone, they’re gone. If meeting Queen Elsa and Anna is on your “must do” list, be sure to head straight for the Fastpasses.  Or if you want to skip the Fastpasses but still see the sisters, you can also catch a glimpse of them in their special appearance before “Mickey’s Soundsational Parade” each day. 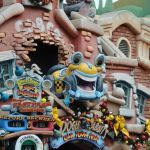 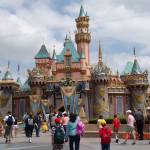 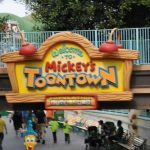 T- Toontown- Toontown is another “land,” only this one is obviously home to the “Toons.”  This is a great place to meet characters such as Mickey, Minnie, Donald, Daisy, Pluto, Goofy, Chip, and Dale. If you’ve ever wondered what the characters’ homes look like, this is a great place to check them out, as well as explore some of the other city attractions such as the Toontown Jail, Pound, or catch a ride back on the Disneyland Railroad. 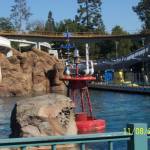 U- Underwater Attraction- Finding Nemo Submarine Voyage. Over in Tomorrowland, you can find climb aboard a submarine and go on an underwater adventure with Nemo, Dory, Marlin, and all of their friends. This ride was formerly the Submarine Voyage for 20,000 Leagues Under the Sea.  While you wait to board your submarine, you will  be entertained by the seagulls who constantly look around chanting their famous phrase of “Mine! Mine! Mine!” 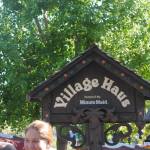 V- Village Haus– Village Haus is one of my favorite quick service restaurants in Disneyland. It  is cheap and fairly quick, has beautiful Pinocchio themed décor, and is centrally located next to the Anna and Elsa Meet & Greet in Fantasyland. 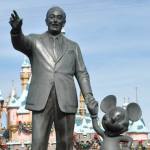 W- Walt Disney and Mickey Mouse “Partners” Statue- One of the most iconic places at Disneyland (not to mention one of the best places for taking pictures), this statue has been around since November 18, 1993- Mickey Mouse’s 65th birthday. Not only does it play tribute to Walt’s claim that “It all started with a  mouse,”  but it also highlights Walt’s dream of what he wanted Disneyland to be remembered as. The plaque directly below the statue in Disneyland says, “I think most of all what I want Disneyland to be is a happy place…Where parents and children can have fun, together. — Walt Disney.” 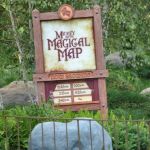 Y- Yensid (and Mickey and the Magical Map)- Yensid (Disney spelled backwards), is the name of the sorcerer from the Fantasia short “The Sorcerer’s Apprentice.”  In the show, Mickey and the Magical Map, Yensid narrates the adventures of his apprentice, Mickey, who wants to become a mapmaker. This show includes appearances from multiple Disney characters including King Louie, Pocahontas, Rapunzel, and Tiana. You can currently watch this show over at the Fantasyland Theatre. Disney Diva Tip: Like every Disney show, this is very popular, and you will definitely want to get there early in order to get the best seats. 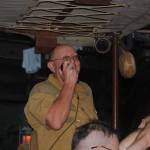 Z- Zebra (from Jungle Cruise)- Jungle Cruise is a great ride (complete with several puns from your boat guide) as you glide along the various jungles of the world. You can see a myriad of animals including snakes, gorillas, elephants, piranhas, lions, tigers, alligators, and of course, zebras… including one who ended up “sleeping” in a cave, protected by a pride of lions. It’s really thoughtful of the lions to watch over him while he naps!