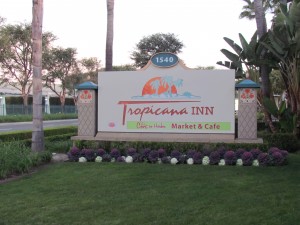 My husband and I took our first trip to Disneyland in February of 2014. While planning our trip our travel agent, Pixie Leslie Harris, & our Co-Editor D’land Diva BOTH recommended I try out a Good Neighbor Hotel.

So Diva Husband and I sat down with some of our travel books and google maps to try to find the perfect hotel that would be super close to Disneyland and within our budget (I was traveling for a conference so my budget was VERY fixed). We weren’t really sure what to pick and being that we’d only been to Walt Disney World, where you have to get on some sort of transportation to get to ANY park, we really didn’t even have a good frame of reference to work with.

So when we found Tropicana Inn and Suites and saw that it was in our budget and had less than a 10 minute walk to Disneyland we decided to try it. I’ll be honest, I was nervous. I had no idea what I was going to get. Would it be a run down shabby joint that I was going to freak out about sleeping in? It really had me paincked, as most things do when you don’t have a frame of reference.

But it turns out all of my fear was for nothing!! Tropicana Inn and Suites was the PERFECT place for us and I’m SURE we would stay here again if given the opportunity.

When we arrived at LAX airport we used a shuttle service called Super Shuttle to take us to the Tropicana Inn. You can go online and pre-set the time they should be there to pick you up and what hotel you are going to. It was inexpensive and worth EVERY PENNY to use as we would have seriously died driving in the crazy Los Angeles traffic. My husband kept saying, “We’d have been divorced before we even got out of the traffic circle around the airport”! We arrived close to sunset at the hotel and went to check in. 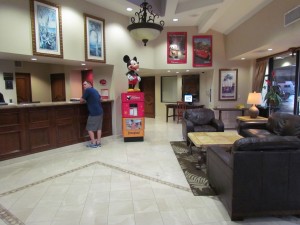 The lobby is clean and the front desk attendants were EXTREMELY helpful. There are some comfy couches and a table set up in there that would make it a good meeting place in the morning if you have friends staying at the same hotel but not in a room close to yours. We were also able to buy our Disneyland tickets there at the front desk with no problems at all.

They had another cool feature where you could take a picture of yourself there in the lobby using this machine and then post it to social networks or emailing so you could show off that you’ve made it to Disneyland! 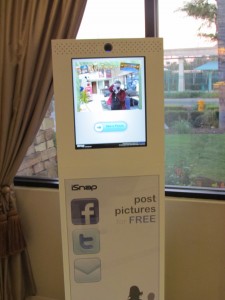 Our room overlooked the pool and was on the second floor. The pool also had a jacuzzi which would be super if you were sore! 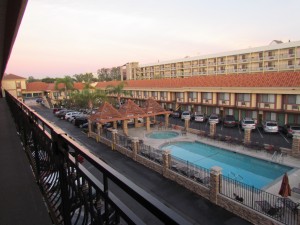 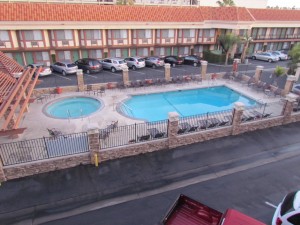 We had double beds which was beyond fantastic because my kids weren’t traveling. Which means that I got my OWN BED! Which I’ve not had in forever! The bedroom was very comparable to the Port Orleans French Quarter  moderate rooms I’ve stayed in before at Walt Disney World. The bathroom was a good size and, like many of the resort rooms at Walt Disney World, the shower/toilet is separated from the sink and dressing area. The best part? You are so very close to Disneyland you can “check in” at Disneyland park while laying in your bed! 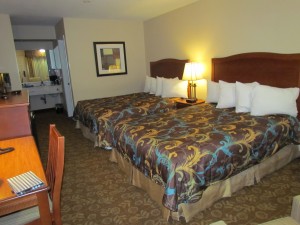 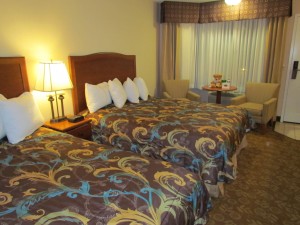 The beds were soft and the pillows were fantastic! 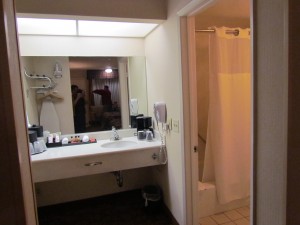 The rooms also have a chest of drawers, a mini refrigerator and a table/sitting area to enjoy.  And when I walked out of my room what was my view? Oh you could only SEE Space Mountain, and Big Thunder Mountain in Disneyland and you could see Tower of Terror at California Adventure also. Coming from a Disney World point of reference it was amazing to be so close to the Parks. Normally you are always in traveling distance, but here I could just WALK. 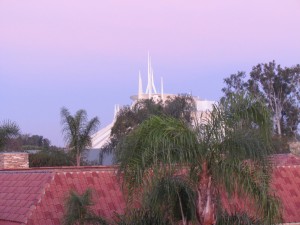 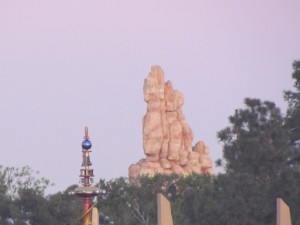 Wondering just how close the Tropicana is to the park? Watch this video! I literally could walk from my hotel room and be at the gate to Disneyland or California Adventure in about 5-7 minutes!

So, I HIGHLY recommend you consider booking your next trip to Disneyland and staying in the Tropicana Inn. They were awesome, the rooms were great, the hotel is so close to the parks and I just loved it! You can book your room by clicking HERE.