Disneyland Memories- Celebrating 60 Years at the Happiest Place on Earth 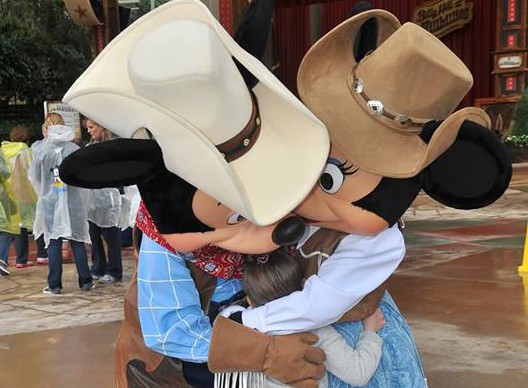 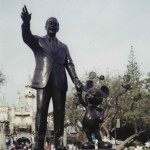 It is amazing to think that back when Walt Disney first envisioned Disneyland, everyone thought he was insane. Who knew that his vision would change the entertainment world forever, and give so many people a magical home away from home. In honor of Disneyland’s 60th anniversary, we wanted to share with you some our favorite Disneyland memories!

Character Diva- I was fortunate to have one of my uncles work at Disneyland for over 35 years. That meant that while I was growing up, we often got to go to Disneyland while visiting my relatives. One of my favorite memories was when my uncle was working on the submarines (back when they were from 20,000 Leagues Under the Sea), and he picked me up so I could look out on top and see things from a cast member’s perspective.

Another favorite moment was when I was a senior in high school, my school choir went down to perform at Disneyland. While I was blessed enough to perform there on two separate occasions, the best part of the trip (aside from performing in front of my relatives), was when my friends and I were riding Space Mountain. The ride broke down while we were on it, and we were escorted back to the loading area. From there, my best friend began playing “Rock, Paper, Scissors” with one of the cast members. I’m not sure how she did it, but she won every single time… and the entire crowd got into watching her and the cast member play over and over again while we waited for the ride to be fixed. When the ride was repaired, we boarded and once more were on our journey through space. And of course, when it was over, everyone cheered at us, because that meant they would have a chance to ride too! 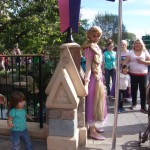 Now that I’m married and have children of my own, I have to say my favorite memory of Disneyland with them has been interacting with Rapunzel. I truly love all of the character meet & greets, and I believe that it takes an extraordinarily talented person to represent each of the Disney characters, but watching my daughter interact with Rapunzel was truly amazing. My daughter was only two at the time (and a little shy), but Rapunzel did everything she could think of to interact with my daughter and they spent several minutes looking at the ducks together and talking about escaping from towers. Disney Diva Tip: If possible, I highly recommend you record these moments on your phone or some other device. These interactions are so priceless, that they definitely make you want to keep them forever. 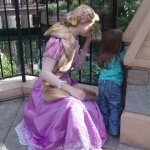 Pin Trading Diva: 1. During Christmastime, my mom and I visited Disneyland together for the Holiday Season for our first time. My mom IS Christmas; she is absolutely obsessed and was on a high the whole day. The sun was setting while we stood in line for Small Wor
ld Holiday and the sky was orangish- not too light and not too dark. We were in line closest to the facade and were waiting like normal, when all of a sudden, music bursts from the speakers and the entire facade lights up in a million colors for the holidays. We were totally immersed in light and color and sound and it was amazing! I will never forget the look of awe, surprise, and utter delight in my mom’s eyes as the bright lights and music enveloped us. This was like the epitome of Christmas Magic at the park and I was there to witness “My Mom’s Christmas Miracle” as I like to call it as we watched Small World celebrate the holidays Disney-style. It is a moment I will cherish forever. <32. On a typical Disney Day, my Mom and I were making our rounds through Cars Land looking for Disney pins for our collection when we entered the Route 66 Curios Shop. There we met our soon to be Best Friend, Cast Member Amanda. She had a lanyard of pins that caught our eye and immediately came over to greet us. She leaned towards us and asked “Do you want to play a trivia game with me? It’s all about Disney!” And my mom and I, taken aback at the chance to play with a Cast Member said Yes!We went through rounds and rounds of questions about little known facts of Disney Movies – each round more daunting than the next. But we were up for the challenge! When we didn’t know the answer, Amanda’s hints helped us learn new facts we didn’t know before about the movies (making the idea of re watching them in A Disney Movie Marathon all the more exciting). After the final round, where my Mom and I both answered our questions correctly, Amanda went behind the counter and pulled out 2 Honorary Citizens of Disney buttons that of which she inscribed Disney Buff on the front and put the answers to our final round on the back with the date. We were so excited that we smiled and asked if we could have a picture with her. She immediately said yes when another Cast Member incorrectly informed us that it is not allowed to take pictures with Cast Members. Bummed all three of us hugged as we thanked Amanda for the exciting and memorable memories and parted ways. But we couldn’t stop thinking about her. We wanted to thank her again for being so magical so we made it to the Chamber of Commerce where we decided to recognize her by filling out a Comment Card. While we were there we found out that it IS NOT against the rules to take pictures with the Cast Members. With our new found knowledge we ran back to Cars Land to find her and get a picture – only to find she had gone home for the day. With no way to find out where and when she would be next ( Cast Member confidentiality) we were saddened. But my Mom and I were also determined so being annual pass holders, every time we visited the park we would make a special visit to the Route 66 Curios Store to see if Amanda was working that day. It took a few months of searching but one glorious day all three of us were in the right place at the right time! We rushed over to Amanda and explained what our story and that we had been waiting to get our longed for picture with her. She smiled, taken aback at the dedication towards her we had, and mentioned how grateful she was for our Comment Card we had sent in about her. Turns out she had been looking for us too! – to thank us for her favorite interaction with a Guest. We all cried a little and finally got our picture together. We even kept the buttons Amanda had given us and brought those out for the shot! 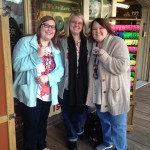 Now my Mom and I keep a lookout in the park for Amanda, while she does the same for us. And on the days where our fates aline, we find each other and make magic together. While she still does her trivia games, Amanda and ourselves share stories and chat about each other’s lives for sometimes more than an hour! We’ve grown to be very close and while she has become our favorite Cast Member, we are told that we are her favorite Guests. It is always a special day when we walk into a store and see Amanda’s face all lit up that we’ve found each other. While this story explains one of our favorite Disneyland memory, every time we run into Amanda we create a whole nother one to add to the books! 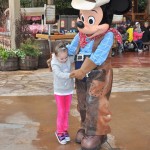 The first time we ever took our daughter to Disneyland was for her 5th birthday. It was our last day at the park and it had poured rain all morning. We were all feeling bummed out with the rain and having to leave the following day. Then we stumbled across an area near Big Thunder Jamboree that was empty and Mickey and Minnie were there!My daughter was just so overjoyed to see them and ran right to them! Since we were the only people around Mickey and Minnie spent so much time with her dancing together, hugging, giving her nose kisses and lots more hugs. It was one memory that we will all remember for ages! 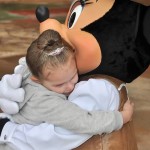 So these are some of our favorite Disneyland memories. What are some of yours? We’d love to hear about them in the comments below!