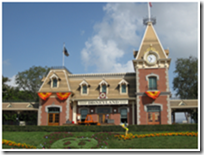 My three year old son has a minor obsession with trains… AND Disneyland…AND Disneyland trains. The first words out of his mouth as we pass through those magical entrance gates is, “Can we go on the train?”

The Disneyland Railroad is just the kind of attraction little ones enjoy because it is a slow paced ride with tons of things to see. My little Z enjoys pointing out the different things he sees to me while riding the train. He loves to hear the train whistle and see the steam come out of the front, to wave to the engineers, and he LOVES to sit near the conductors.

The conductors are a special part of the Disneyland Railroad! Here is a great tip: Sit near a conductor on your next trip! The conductors often hang out in a special place between train cars or simply on the side of one of the railcars. They are an encyclopedia of train facts and Disneyland information. Z will ask them endless questions about the train and about Disneyland rides and they have always been quick to answer and engage with my little one.

On the Disneyland track there is a dark tunnel when crossing into Main Street called the Grand Canyon Diorama. Z has mixed feelings about this tunnel. It’s dark. There are dinosaurs that roar and look frightening. However, on one special trip, the conductor turned on her flashlight for Z (so that he would not be afraid of the dark). Then, she told the most amazing story about the scary roaring T-Rex. His name was Mr. Cuddles, she informed Z, and he was normally a very nice dinosaur, but he was upset at the other dinosaur for taking his peanut butter and jelly sandwich.

Since hearing the story about the dinosaurs fighting over the sandwich, Z now looks forward to the Grand Canyon Diorama. In fact, he often asks to visit Mr. Cuddles!!

If you are looking for a special cast member interaction and a ride “just right” for the toddlers and young children, the Disneyland Railroad is a fun adventure. Just be sure to sit near a conductor for the full experience!