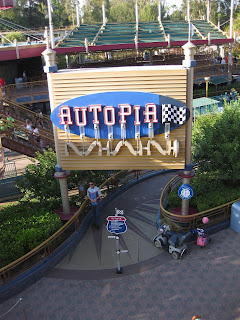 Autopia is one of the rides that was there on opening day, July 17, 1955. It was designed to show what a multi-lane highway would like. Before this time, highways such as this were not in existence- it would not be until after Autopia opened that President Eisenhower would sign legislation allowing them to be built.  Drivers in those early days drove around without guard rails or even bumpers on the cars. The cars, of course, took some serious beatings. Bumpers were designed to fit around the front and back of the cars, but they were initially very weak. You can imagine the bumps and bruises from the collisions! As time went on, the cars were redesigned with safety features and also some nice cosmetic changes. 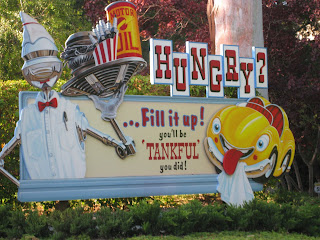 The cars I remember from the 1980’s, were in fact the seventh design, and they were created in the late 1960’s to look like a Corvette Stingray. In the year 2000, Chevron began a partnership with Autopia and there were a lot of redesigns in the roadways (with some cool signs!) and the cars were designed to look like sports cars, off road cars and a “Beetle” type of car.

At Disneyland, unlike at Walt Disney World, the theme for the ride allows guests to get a glimpse in to what it is like to be a car. In the queue there are digital graphics that talk about street rules in a humorous way. Once through the queue, guests are directed down onto the roadway where they will be directed to line up behind a number. Two guests can fit comfortably in each car. There is a height restriction, and when guests get into the car it is easy to see why. The seats are far down and the pedal can be a long way down for little legs. Guests must be 32 inches tall to ride and 54 inches tall to ride alone. As with all Disney rides, guests under the age of 7 years must be accompanied by an adult. 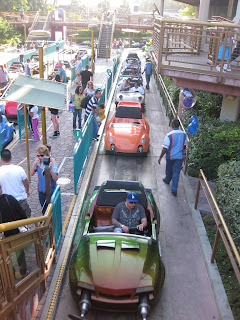 Diva Tip: For children, have the adults handle the pedal and the child handle the wheel.

The ride then handles curves, hills and stoplights. It can be bumpy and, of course, the cars may hit one another. It is a good idea if pregnant women or those sensitive to being jostled a bit not ride. Guests in wheelchairs and scooters must be able to transfer to a car.

The scream factor for this ride is a 1. Not scary for kids- but it might scare adults to see their kids behind the wheel!