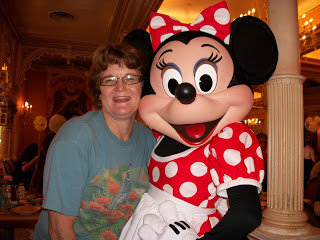 I live about an hour and a half away from Disneyland, which is close enough to drive there and back in a day, but never enough to convince my parents enough to get annual passes, so every trip is a special treat for me. The summer after I graduated high school my mom and I decided to take a mother/daughter trip to Disneyland before I took off for the other side of the world (aka Missouri) for college. I knew I wanted this trip to be special so I looked into the many fabulous things you could do to add a little extra magic to your day. Of course there is the Blue Bayou, but that gets expensive quickly, and you could always get tickets for Fantasmic! but my mom would be in a wheelchair so we knew we had almost guaranteed seats anyway. So when I read about “Minnie and Friends” I knew we had to do it. We made reservations, though they are only ‘recommended’ not required. 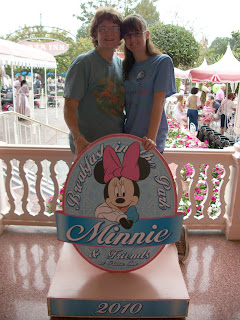 When we walked up to the Plaza Inn they immediately took a keepsake photo for us (Diva Tip: This was PhotoPass but I always have them take one with my camera too, that way you don’t have to pay big bucks and you have someone there to take a good picture for you). After that we walked up to the reservation desk and turned in our names. We paid $30 a person, though I think the price has now gone down to $24 per adult and $12 per child, we were given cute buttons and a table and were set free on the large amount of food they had. They had almost anything you could dream up food wise, and of course anything they could get in the shape of a Mickey head, they did. Mom and I both decided that the food was just okay. Sure there was a huge variety and lots of stuff you could pack away for later, but it seemed like good quality breakfast that you might get from a hotel.
The real treat came from the characters. Here they walk right up to your table and give you individual treatment that you don’t seem to get when you are outside waiting in line. There were a lot of classic characters that everyone loves, but that you just don’t seem to see out in the park. The other great thing is that you aren’t confined to your seat. Though they don’t want you forming lines around the characters, if you are getting up to throw something away or you are getting ready to leave and you see a character you want to meet, you can see if they will come up to you between tables. We actually caught 4 or 5 characters like that. My favorite part was asking The Mad Hatter and Fairy Godmother where I could find more friends later, of course their answers were way more entertaining than asking another cast member.
This is the perfect place to go for any child or child at heart that loves to meet characters, or for those first timers that want to make their trip special. At Pixie Hollow and the Royal Fantasy Faire you can stand in line and meet 2-4 characters after waiting 45 minutes to an hour, but here we met 11 different characters. And there is no rush, mom and I were only there for about 45 minutes, enough to eat and meet characters, but we didn’t want it to take away from other stuff we wanted to do. But the longer you are there, the more characters you meet. I HIGHLY recommend this to families and people looking to make their trip a little more special. One thing to be aware of though, is if you have younger kids, you might want to know how they feel about a giant fuzzy creature coming their way. Just because it’s a big Minnie Mouse coming to say hi, that doesn’t mean your child is going to be happy about seeing them. If you have the opportunity to go to the park more than once, or if you are going for a multiple day trip, eat here the second time/day. This gives you the opportunity to run into a few characters around the park and see how your little one reacts. Often kids feel better about meeting one of the face characters first, so head over to Pixie Hollow or Royal Fantasy Faire and see how they do meeting the Princess’ and Fairies (Diva Tip: If meeting characters is high on your priority list, head to one of these spots right when the park opens, the line will be almost non-existent and your little one won’t have spilled anything on themselves, yet).
Share this...