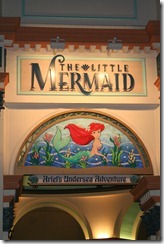 I was nine months pregnant the first time I took this trip down under the sea. Yes, you read that correctly, nine months pregnant. You see, at first the ride was scheduled to open in the Spring of 2011, but didn’t actually open until early summer 2011. My daughter was due middle to late July 2011. However, I was very, very excited for this ride to open and was determined to ride it before I had to take a temporary Disneyland hiatus for the birth of our daughter. All of you who have been pregnant before or been around a lady who is nine months pregnant knows that this was probably not an easy trip to make.

Let’s go back to how this ride came to be. Originally, the building on the pier in Disney California Adventure housed the Golden Dreams Theater. There was a show in there I can honestly say I never saw, starring Whoopi Goldberg. It was never a showstopper in DCA, and would sometimes house added attractions during Halloween time. When it was announced that the new Little Mermaid attraction was going to be housed there, many were wondering how that was going to work, however, Disney Imagineers had plans for a Little Mermaid Ride cooked up long before the announcements.

You can see the plans are on the extended version DVD of the Little Mermaid. Imagineers took these plans, the latest in animatronics, and some major redesigns of the Golden Dreams theater, and created a new fun family dark ride.

So, I was nine months pregnant and determined to get on the Little Mermaid Ride. We arrived on an annual pass holder, soft opening day.

Diva tip: There are days and times before a ride or attraction opens that annual pass holders are allowed to participate in the new attraction. There may also be times and days visitors can participate called a “soft opening”. If you’re curious you can always ask the people at Guest Relations if these opportunities exist during your trip.

To save time and energy getting into the park, we parked in the Toy Story Lot and I waddled my way into Disney California Adventure.

While I waited out front, my husband snuck back to the ride (which is located in the middle of the park) to check out the line, which turned out to be long… VERY long.

In desperation, we went over to guest services and a very kind lady gave me a guest assistance pass after looking at my belly. We were told that we would have to talk to the cast member at the front of the attraction for assistance. Since the queue is ADA compliant (more on this later), the Cast Member gave us a pass to come back to line in an hour. This meant we skipped most of the line when we returned but we would have been in about the same location if we had waited in line. This is just one of the awesome cast member experiences we have had at the Disneyland Resort. 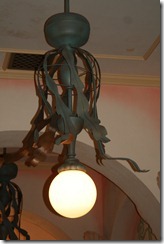 The queue to the ride has wonderful theming. Part of the queue is outdoors, but most of it is covered from the sun and the rain. The ground is covered in a type of cement that looks remarkably like sand and has bits of seashells in it.

Once inside the building, there are more of Disney’s amazing attention to detail, such as lamps that looks like seaweed. There are also murals! As in many of the other dark rides at the Disneyland Resort, story elements and characters are developed before you even reach the ride.

The ride is an Omni mover ride, much like the Haunted Mansion at Disneyland and Disney World and Nemo’s under the sea voyage at WDW. There is a moving walkway and guests step onto the walkway and into an open clamshell, which seat two to three guests. 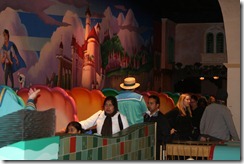 It is a slow moving ride and completely wheelchair accessible. TIP: All wheelchair guests will be instructed to move through the queue before entering the ride. One of the clamshells is designed to allow guests in wheelchairs to experience the attraction with one or two additional guests. 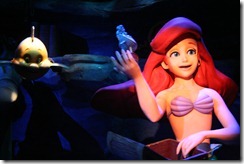 This is a dark ride. Guests are taken “under the sea” through creative imaging of ocean waves and by the backwards movement of your clamshell to the bottom level of the ride.

Once “under the sea”, there is a magical place where the ocean animals come together to sing one of the best known songs from the Little Mermaid movie “Under the Sea.” This particular part of the ride is amazing. 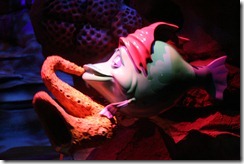 You will see all of your favorite sea characters from the movie, as well as other ocean animals singing, dancing and playing musical instruments. Diva tip: be on the lookout for Mr. Limpet, a character from another Disney film. He’s a nice little homage. 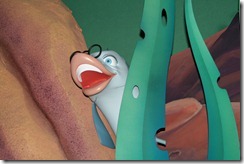 Ariel is a particular standout in this part of the ride, as a demonstration of just how far animatronics have come. She moves, blinks and looks very life like.

Like many dark rides, the ride also introduces a darker side to the story, and in this case it is Ursula the sea witch in her cave. My three year old son had a bit of problem with this part of the ride the first time he rode it, so be forewarned. She is larger than life, also an amazing animatronic presence, so be warned that she can be a bit frightening for the younger audience.

There are a few screens that extend the story before one of my personal favorite scenes from the movie as well as one of my favorite songs: “Kiss the Girl.” 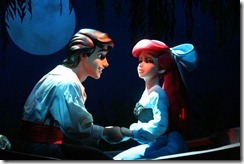 This ride ends happily ever after and my little Z loves to wave to Ariel and Eric during the last scene. 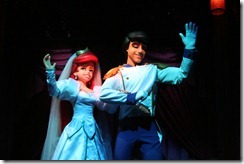 There is no scream factor for this ride, it is simply a family ride.

It is an enjoyable journey under the sea. Some children may have trouble with the Ursula sea witch parts, or the fact that it is a dark ride. I have also been able to ride with my littlest one sitting on my lap, for those of you with babies. There is a lap bar in your clamshell, so watch those knees.

The story is familiar, and well told through screens, animatronics, and song. This is on the list of my family’s favorite attractions for DCA, and it was well worth the effort- even at nine months pregnant- to ride the Little Mermaid: Ariel’s Undersea Adventure.