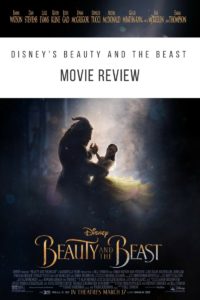 As classic Disney movies go, Beauty and the Beast will always be a favorite of mine. When I heard they were making a live-action rendition, the inner Disney junkie was squealing with excitement, but my mind was wondering how in the world they would do it. Would it be too cheesy? Would it look fake? How in the world are they going to make a talking teapot? I mean, seriously, these questions went through my head as if I had zero faith in Disney. Who could even live up to Angela Lansbury’s, “Beauty and the  Beast”? The only answer would and could be Emma Thompson, but I still think Angela did it better. Leave it to Disney, though, to have no holds barred and make this move epic in every sense of the word. My husband and I actually went by ourselves, meaning no kids, even though I have one son that wants to see it. We made a date night out of this, and was happy to say that he wanted to see it just as much as I did.

The biggest question that crosses peoples minds was, would they defer from the original some, if not most, of the movie? I can safely put your mind at ease to say that this movie is almost 100% true to the original animated version. On an occasion or two, more backstory was elaborated on, which really answers some questions, and when it did deviate from the original, it still flowed. Any deviation that was made was not to deviate from the original story, but to give viewers a deeper look. From beginning to end, I was grasped in this movie, never wanting it to end. I literally cried from beginning to end, not sad tears, just shear joy that I was there, watching a favorite come to life. Disney has that effect on me. I don’t think I could have picked a better cast to represent the characters from the classic and timeless film.

The all-star cast was a force to be reckoned with. I mean, Josh Gad as LeFou, the overly adoring right hand man of Gaston, Ian McKellar as Cogsworth, and Ewan McGregor as Lumiere are all amazing in their roles. My most anticipated part of the movie was “Be Our Guest”, and it lived up to it’s original predecessor while surpassing it!

Without giving anything else away, which is hard to do because it’s so close to the original, so you know how the story goes, I highly recommend you go see this movie! I plan on going again with my middle son that wants to see it. It’s a must see, and a must have as soon as it hits the shelves. This remade classic is sure to be a classic of it’s own. It’s simply a film that will leave you feeling ooey gooey on the inside and feel as if fairytales are real, that love conquers all, and you can find true love within the most ghastly of beasts. It made me want to be a princess. Again.

If you live in the Hollywood area, and want VIP treatment, I highly recommend the El Capitan Theatre. Read the review of the movie screening here.