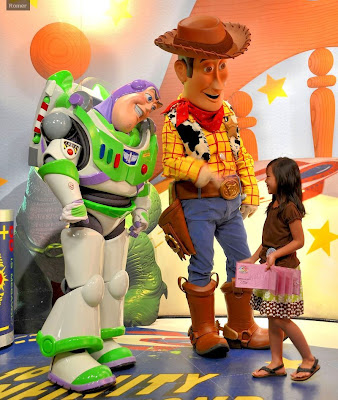 Author: Canadian Diva
After reading the Disney Diva’s article “How Pixar Made Me a Better Person”, it pulled at my “heartstrings”. The article also had me reminisce about meeting with a couple of our family’s favorite Disney Pixar characters: Woody and Buzz Lightyear.
You can find Woody and Buzz in Disney’s Hollywood Studios at across from the very popular Toy Story Midway Mania ride.Now, I’m not going to lie, in my experience it’s a looooooong wait, especially during peak hours. Not quite as long as waiting for Toy Story Midway Mania without a Fastpass, but since there IS no fast pass for a character greeting at Hollywood Studios, it is long enough to eat up your Tour Planning time.
It took our family about 40 minutes to get through the extensive, but interesting, queue. When we met Woody and Buzz in Andy’s bedroom (the set is painted like Andy’s room from the first Toy Story movie), they were so colorful, animated and FUN, which made it worth the wait.
Even though Woody and Buzz (sometimes Jessie appears too) do not “talk”, their actions and gestures communicate in such a way that you really understand. We had a blast with them. In the above photo, you can see my daughter laughing so hard as Woody jokes around with her, not giving her pen back, and Buzz looking at her endearingly with his head tilted. Note: Buzz Lightyear’s hand is too big to write, so he has a special stamp, which you may notice on the autograph book (that is upside down) in the photo.
Was it worth the wait? Definitely! Especially with all the photo opportunities along the way. As the Disney Diva mentions in her article, “Magician Mickey’s Meet and Greet”, the Imagineers put a lot of attention to detail.
If your child is “fan”-atical for the TOY STORY movies, then head on over to Pixar place in Disney’s Hollywood Studios. Pick up a times guide and plan your day for it. The line may feel… “to infinity and beyond”, but the queue itself is fun, and the eventual interaction with the Toy Story Characters is beyond imaginable joy!
Diva Tip: Bring a Sharpie or thick pen to any Character Meet and Greet (but not a green colored because it cannot wash out of their costumes). Sharpies are much easier for the characters to hold and Sharpies make it easier to see! Also see here for more tips on making your own autograph book. See also here and here for information on the Photopass card. Photopass Cast Members will take photos for you and your whole family with your favorite Walt Disney Characters.
Share this...