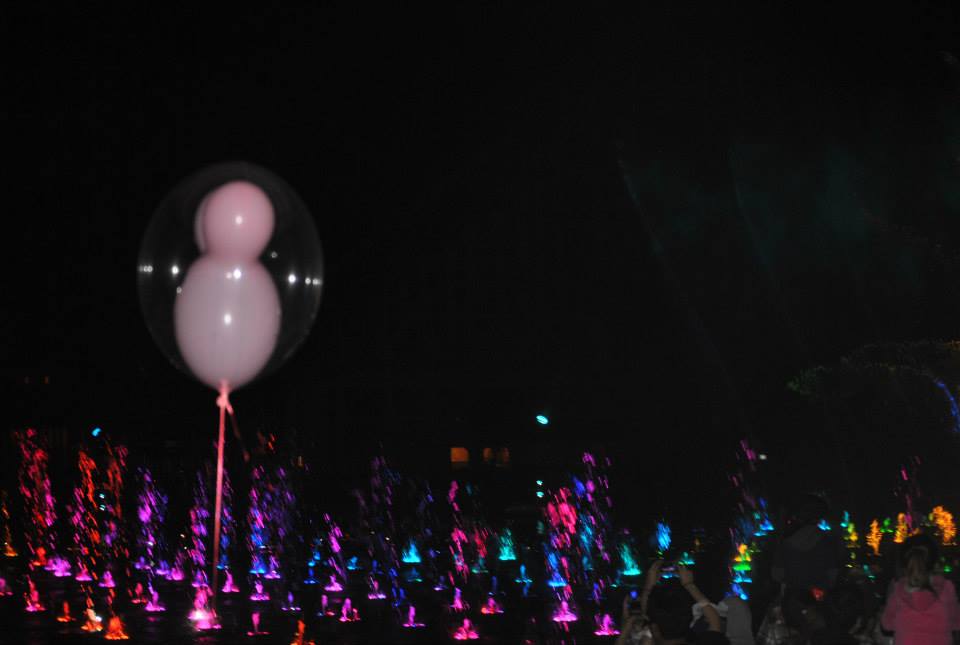 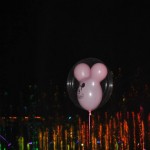 The World of Color. So let me begin by saying it’s a great show. The show has been around since 2010 at Paradise Pier in Disney’s  California Adventure, so you can imagine it has a pretty large fan base. And I liked it. I really wanted to love it… but I didn’t. Now before you quit reading, don’t get me wrong- it had a lot of really cool stuff going on… colorful lights, water shooting really high into the air – and spoilers- but about halfway into it, you even got the pyrotechnics involved. I will admit, that was pretty awesome. But before you go, here are some tips and factors that I think everyone needs to be aware of.

This attraction has a Fastpass!! It’s located over by the Grizzly River Run in California Adventure, and because this is such a popular attraction, I recommend getting a Fastpass immediately. Now I know what you’re thinking- come on, Character Diva, can’t I only get one Fastpass at a time? You’re telling me to sacrifice Screamin California and the Tower of Terror to watch a show? Don’t worry about not being able to get other Fastpasses… this is on a separate system, so you can still get fastpasses for other rides without having to wait for the “time slot” on this Fastpass to be ready. So that being said, remember this Disney Diva Tip: Get your Fastpass for The World of Color first, and then go and get a fastpass to whatever ride you wanted to get another Fastpass for.

There are two seating areas, which are indicated by the color on your Fastpass. The blue seating (which is distributed first and has the “best” viewing areas) and then the yellow seating area. If for some reason you are unable to get a Fastpass, you may still see the show, but it will most likely be difficult to see. Disney Diva Tip: Even if you have a Fastpass, make sure you get there early… This is the most valuable tip I can give you!! They start letting people into the blue and yellow sections an hour before the show starts, and from there, it’s all first come, first served… This is particularly important if you have small children. This is a standing room only show, which makes it especially important to have your little ones in the front. So remember- timeliness is key! Even if you are the first one to get a Fastpass at the beginning of the day, if you’re not in line when they start letting people in, you can still be standing a few rows back, and who wants to be doing that?

That being said, you may want to wind your evening down to guarantee you can get in line.  You can always ask a cast member when you should get in line, and I also highly recommend using this time to double check with them and make sure you’re in the right area for your particular section. They also may offer tips on where to stand to get the best viewing, because as much as Disney’s website claims that there are no bad viewing areas, well, we all know that some places are better than others.

There are also a couple other options to get fastpasses for the show involving Disney Dining. We have never opted for this, so I can’t tell you much about it, but luckily other Disney Divas have. If you want to go that route, you can read more about that here and here.

Okay… so you’ve made it to the line, and they’re starting to let people in…. now what? Well, once the line starts moving, you and your group want to proceed to the closest possible location. Disney Diva Tip: When you’re trying to find a good spot, try to have the Screamin California Roller Coaster and the Ferris Wheel as your center points. Most of the action seemed to take place between those two key points. They do show clips from other angles, and on the sun (formerly the Mickey Mouse head) on the Screamin California ride, but they can be blurry and hard to see at certain angles. They also have zones that claim to be the “wet zones” if you want to increase your odds of getting soaked during the show, but these can be hit or miss, too. My cousin’s son wanted to stand in that area, so my group split into two, but I don’t think any of them standing in the wet area got drenched.

Another thing to take into consideration when picking your spot? The noise. We were standing close to some of the speakers, and let me tell you, the show is LOUD! So I would try and avoid standing by the speakers… or just make sure to carry some cotton balls or ear plugs. Will you look weird? Maybe… but honestly, I’d like to keep  my hearing for a while and in reality, everyone’s going to be watching the show (i.e.  not you) anyway.

Then comes the waiting. And if you’ve been dutifully waiting in line just to get into the World of Color standing area, you will most likely be waiting for an hour. The first half hour they allow you to sit, and of course you are more than welcome to enter and exit the area as often as you’d like. (If you do wish to leave the viewing area, they will hand you a Fastpass before you leave and collect it again upon your return). Now this is where probably my second most valuable tip comes in: Disney Diva Tip: If you have other people in your group who are old enough and willing enough to stay and save your spot, use this time to go shopping! You have an hour to wait anyway, and since the show is in the evening and generally around when the park closes (though depending on the time of year, they sometimes show it multiple times per day), this is the best time to go shopping! Particularly because if you are leaving the theme parks afterwards, your party will most likely not be in the mood to go shopping, and if you haven’t bought souvenirs yet… well, let’s just say rushing through stores and trying to find things on your “To buy” list can be a chaotic frenzy at best. This is not to mention the rest of your group will be glaring at you because all they want to do is go home and rest after standing and walking all day and might not share in your enthusiasm of coming home with all kinds of trinkets and  Disney paraphernalia. This particularly applies to husbands who don’t enjoy shopping anyway! So learn from my mistake, and take advantage of the wait to have the rest of your party take turns saving spots while you can shop, use the bathroom, or grab snacks! It’ll make the wait go faster too.

Now… the next part is what annoyed me most about the World of Color. Remember how I told you that you could sit while you waited? Well, that’s only good until thirty minutes before the show starts. That’s when you have to stand. And you are supposed to remain standing until the show ends. The show itself is a little under thirty minutes, so basically that means you will be standing for an hour. Boo. No Bueno in my book… Particularly if you have kids. My husband and I went with our two kids, my aunt, two of my cousins, and three of their kids. Guess what? With the exception of my cousin, Rachael and her son who was twelve, all of the adults were hoisting a kid in their arms or on their shoulders, for you guessed it, an hour. (I have to give kudos to my aunt who was hoisting up her seven year old granddaughter for the show, but she’s also in REALLY good shape.) My son did sleep in his stroller for part of it, but unless your child is asleep (which kind of defeats the purpose of taking your kids to see the show), remember that unless you have a REALLY good location, you will most likely be holding your child for some (if not all) of it. 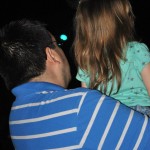 Now if you’ve managed to read all that and still want to go to the show, major kudos to you, because now you get to hear about the show itself! I don’t want to throw in too many spoilers, because part of the Disney magic is experiencing it itself and it helps to have some surprises, but let’s just say, there are lots of songs and scenes from several Disney movies that are synchronized to a dazzling light and water show. I have to admit, the first half of the show I was beginning to wonder if the show was really overly hyped up, but once the Pirates of the Caribbean movies came on and the pyrotechnics began, I found the display to be much more impressive.

When the show ends, most people tend to leave. If California Adventure and/or Disneyland are still open, you can of course continue with all the excitement and fun that theme parks offer, or you can always hit Downtown Disney for more shopping and eating.

The show is extremely popular, so obviously a lot of people like it. If you want to hear a more positive review on it, I’d advise you to read D’land Diva’s review here. And I will agree, it can be a great show to see… particularly if you are standing in the front, and your kids have a good place to view everything without being held. The pyrotechnics are amazing, the water and lights are creative, but personally is it worth the wait? To be honest… I’d probably skip it, or at least go shopping in between. Plus, I’m more of an Electrical Parade (so sad that it moved to Disney World) and Fantasmic kinda girl anyway. And I’m sure I’ll see it again at some point. Disney announced that they were doing a Frozen theme for the Christmas holidays, and I would love to see that. But I’m not in any rush.