Diva Secrets: Best places to get autographs at Disney World 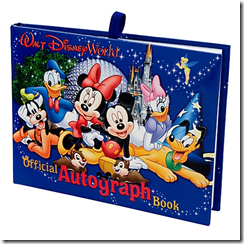 A Disney Trip is just NOT a trip without a few celebrity autographs! Today I’ll tell you some of my favorite places to get Disney Autographs with shorter lines.

1. Chef Mickeys (Contemporary Resort) – The best place to get Mickey, Minnie, Goofy, Donald and Pluto’s (also referred to as the “Fab 5”) autograph with no line, no waiting is at Chef Mickeys. There is, quite honestly, not another place at WDW (except Tusker house which I don’t really care for honestly), to grab these famous John Hancocks and not come out irritated. You can also get them at the Autograph Trails at Animal Kingdom, but you’ll get a lot hotter waiting for them.

2. Akershus (Epcot) – Looove Princesses? Don’t want to blow TWO meal credits and have to pray like crazy just to get a table to see Cinderella, Snow White, Ariel, Belle, Aurora as you can see at the Royal Table? Akershus is for you then. Do it for Breakfast though as the lunch and dinner are very, ummmm, nordic. And no where near as tasty as the very American breakfast.

3. Epcot World Showcase– Really Epcot is the best park to get autographs in my opinion, with Animal Kingdom a close second. In England you can see Mary Poppins and Alice. France you can catch Marie, (Aristocats), Princess Aurora, Belle & The Beast. Morocco gets you the BEST way to see Princess Jasmine and Aladdin. In Germany you can meet Snow White and “The Prince”(haha poor guy doesn’t even get a name) and occasionally you can catch Dopey. Mulan is in China.

**Diva Bonus Tip** When cast-members are learning to be characters sometimes you can catch them “practicing” at Epcot. Some of the best characters (and rarest) we’ve been able to interact with are on a little walkway between America and Italy and at the International Gateway (we’ve even met MEG from Hercules at the International Gateway). Make friends with a characters “handler” while you wait and ask them if they know of any rare character appearances on the schedule that day and when they might be there. Those people always have the scoop so be ultra, mega, nice to them!!!

4. Animal Kingdom – Greeting Trails – Wanna get Chip and Dales’s autograph? The Greeting Trails is the place to go. You can also get Mickey, Minnnie, Goofy and Donald on these trails, but I suggest you wait to do it until the Lion King show is going on since the lines seem to be shorter then.

5. Halloween or Christmas Parties – A great way to get some face time with really rare characters is at the Halloween Party. As far as I know it’s the only place you can get your photo with all 7 Dwarves, Queen of Hearts, Tarzan, and more! The Halloween party is also the only place you can get your photo standing right in front of Cinderella’s carriage. I think some of her mice friends are there too. The parties are some of my faaavorite places to see/meet characters. The Best mad hatter I ever met was at the Halloween party.

Remember, the best way to find out who is in the park is to be nice to a character “handler” and ask them who is expected to be in the park and what time they should be there.

Also, consider collecting autographs in different ways, like making your own autograph book OR buying a large photo-matte for the characters to sign.
Disney Diva, signing off!