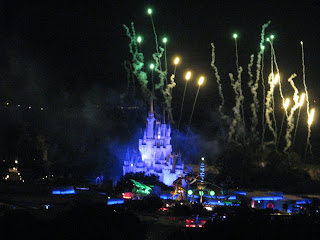 I had a question come in today from Stephanie wanting to know where the best places are to see the fireworks in the different parks. So I thought this was a good post idea to share with ALL of you!

The problem is that it really depends on what you WANT where the best place is. So I’ll give you the scenario of each and where I’d go in each of those circumstances. OK?
MAGIC KINGDOM – Wishes (or Holiday party fireworks)
For THE best view- The Main Street Train Station. This is a raised location above the crazy crowds, but with a straight on view of the castle down Main Street. You ideally want to be right up against the rail. This is perfect on parade nights because you can see both in perfect places. The downside??? Requires saving the spot about 1.5 hours BEFORE the night parade. or two hours before if there is no parade!!!
Second best view – Tommorrowland Terrace. If there is not a Dessert Party scheduled then Tomorrowland Terrace is THE place to be. You can grab some icecream about an hour before hand and grab a table on the lower part of the Terrace and have a great view WHILE you sit and rest.
For Tinker Bell to fly directly over your head – The bridge from Main Street to Tomorrowland. PERFECT! Look for the line and put yourself directly below. You’ll need to give yourself about an hour to save the spot (if its busier even more time is needed). One down side. ITS REALLY LOUD. I mean, the fireworks are really loud anyway, but they’re SUPER loud when you’re that close to them. It could really terrify your little one. I suggest bringing ear-plugs for kids to watch fireworks with regardless. These are HUGE fireworks and really loud!
Good view… possibly – Main Street. So the problem with Main Street is that everybody and their mama wants to be there. And MANY people dont save spots. And even if you did save a spot you will all bum-rush to the middle of the street and will be squinched, prodded, stepped on, and its highly likely your child will STILL not be able to see. So unless you’re ready to go primal to see some fireworks, lay off the Main Street. haha
For a different view – The Top of the Contemporary (California Grille) The photo above was taken from the top of the Contemporary. If you can get reservations for California Grille around the time of fireworks you can go out to the top of the Contemporary and they pipe in the music from Wishes as the fireworks are going. So its the same as seeing it in the park, but a totally different angle.
EPCOT – IllumiNations
For the BEST view. The best seat in the house easily goes to those lucky enough to get a seat on the terrace of the Rose and Crown in the 45-30 minutes leading up to the Fireworks. Great viewing, at a table, and beer. Really, what more could you want?
Second Best view (in theory, Not Diva tested because its new). With the opening of the new outdoor La Catina de San Angel and its open air seating area on the lagoon it should be a PERFECT fireworks spot. That is assuming you can GET a spot.
From one of the countries: Japan or Italy. Honestly you can see the fireworks from ANY of the countries in World Showcase, but there is a raised area in Italy and you’re very close to the water at Japan. There are also a few benches at both of these. You’ll need the regular hour long “spot saving” however. If you’re staying in Boardwalk, Beach or Yacht you’ll want to pick one of the countries close to International Gateway.
If you want to get out of Epcot FAST. If you want to beat the lines back to the resort buses or your car after fireworks you really need to be as close to the bridge between World Showcase and Future World. I personally don’t care about the spinning globe (I think it goes on WAYYYYY too long) so I don’t mind watching from almost the fountain in Future World so I’m out fast, but if its your first trip you may opt for somewhere closer. IllumiNations is my least favorite fireworks show (but thats my personal opinion!)
Hollywood Studios – Fantasmic!
There are only two options really for Hollywood Studios. Come and sit forever and a day on extremely HARD concrete blocks and be closer or come at the last minute and stand up.
To be CLOSER – Come early. Some people opt for the dinner and special seating package. You still have to be there an HOUR before though. And trust me, that concrete is not soft. The closer you get the closer you are to the fire also that happens on the water. And it is HOT! Might really, really terrify your little child.
To come last minute – I have literally come to this Fireworks show and held a 5 year old on my right hip the entire time so he could see while I stood. It wasn’t what I’d call SUPER FUN, but we were some of the first people out and we got to “play” right up to time for Fireworks. ALWAYS go to the second showing of fireworks if there are two as the second will be FAR less crowded. I could see the entire show perfectly fine and I was about two inches from as far back as you could possibly go.
So it really just depends on what you have planned for the day. You really want somewhere between those two. The back row of the amphitheater may be the best seats there are because you can see EVERYTHING. IF you get toooo close you miss some of the things being projected on on the water.
Animal Kingdom doesn’t have fireworks by the way. It would terrify the animals. 🙂
So there you are. Disney Diva’s favorite Fireworks spots JUST FOR YOU. 🙂 Enjoy!
Share this...