Diving into the Living Seas at Epcot 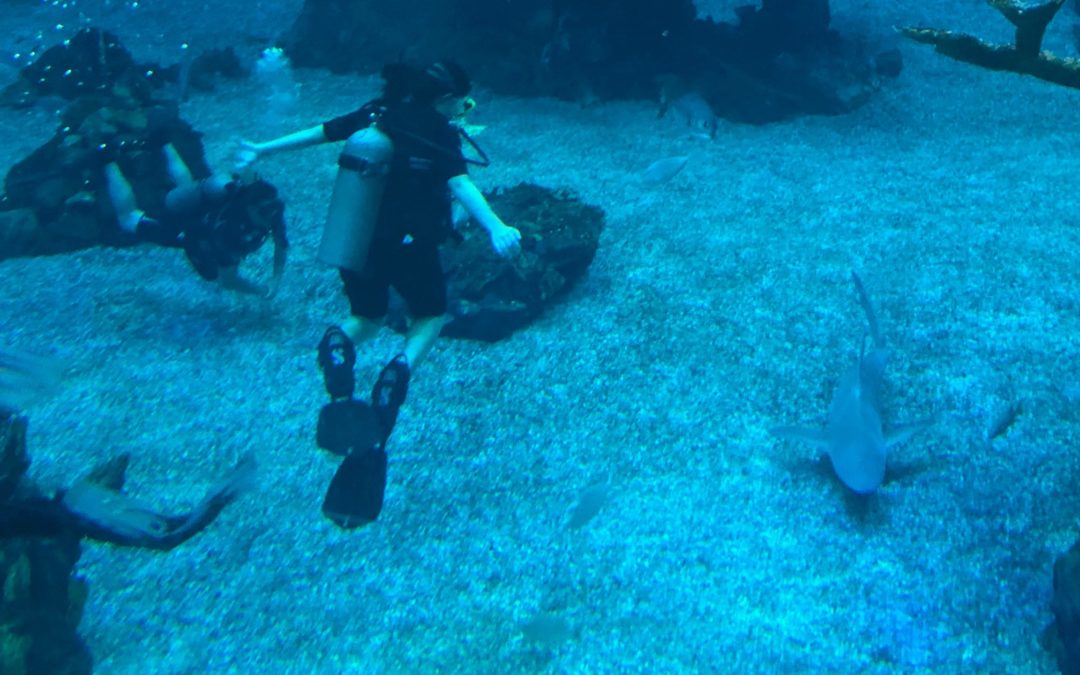 My younger daughter, Mini Diva, is a bit of a daredevil: she loves roller coasters, ziplining, and she’d go sky diving if she was old enough. When she turned 13 earlier this year, she had one request: she wanted to get her open water SCUBA certification. She got certified in March, but hasn’t logged any dives since – she’s the only one in the family that wants to dive, and I have struggled to find a way to make that happen. Then I read about DiveQuest at Epcot, and a lightbulb went off in my head: she could combine two things she loves: Disney and SCUBA! And her anxious, admittedly “chicken,” mom would feel comfortable that she was diving in a safe environment. 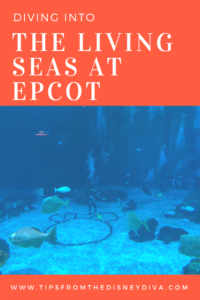 I wasn’t sure how difficult an experience this was going to be to schedule (after my Dining with an Imagineer experience last year), so I gave the Walt Disney World tour line at (407) WDW-TOUR a call. The good news is that, surprisingly, there is generally quite a bit of availability for this experience. So much so that I was able to change the date quite easily when our plans changed. DiveQuest is offered Tuesday through Saturday, at 4:30 and 5:30 pm. 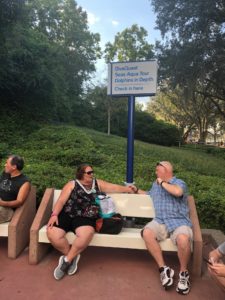 The experience, which lasts about 3 hours (with around 40 minutes of actual dive time), costs $179 and includes all gear and tanks. There are annual pass and DVC discounts. I actually found the cost fairly reasonable considering boat dives in our area (South Florida) can be well over $100 if you don’t own your own equipment.

Kids must be at least 10 to participate, and those under 12 must be accompanied by an adult. Luckily, my daughter is 13, so she could participate on her own.

Tip: You don’t have to have theme park admission to experience DiveQuest. You enter and exit through a special gate outside Epcot.

On the day of her dive, we showed up a few minutes early at the meeting point, which is just outside and to the right of the turnstiles at Epcot. You do have to go through security to get there. I checked her in, and a few minutes later, she and her fellow divers (around 15 total) were whisked away.

The divers were then taken behind the scenes. My daughter told me they were seated on a bench while their dive cards were checked and their shoe sizes taken.  Then they proceeded into the back-stage area for a brief tour. They were shown the kitchens where food is prepared for the marine animals – interestingly, they eat a lot of the same foods that the restaurants serve, except theirs is raw. They got to see the manatee and dolphin areas (these creatures are kept separate from the rest of the sea life in the aquarium – the dolphins apparently think everything is a “toy” and try to play with it). 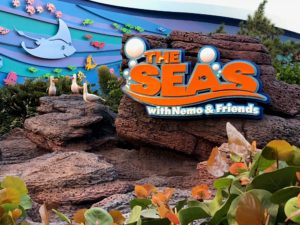 My daughter was then brought to a locker room where she found a locker with her name on it. Inside was all her equipment, her wet suit and booties, and a towel. The only things she had to bring with her were her bathing suit and dive card (we also packed some flip flops for the shower room). The equipment was all put together for everyone, something that my daughter says is a real treat, since one typically has to assemble everything oneself.

Tip: Don’t have your SCUBA certification? Disney also offers a snorkeling experience and a dolphin encounter.

There were two safety divers and a cameraman in the water with the divers. The divemaster shared a bunch of trivia with them that my daughter found fascinating, including the fact that Disney World has over 800 cast members who have to have SCUBA certification as part of their job description. I’m not exactly sure which jobs entail diving, but he did say that he had once fished a $350,000+ engagement ring out of Bay Lake for a couple. 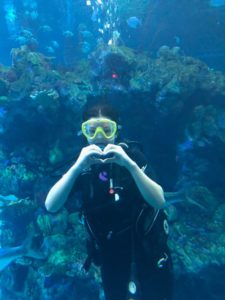 Did you know that the aquarium at The Seas with Nemo & Friends is big enough to fit the Spaceship Earth inside it and have room to spare for a Disney bus to drive around it? The 5.7 million gallon saltwater aquarium is home to more than 6,000 sea creatures.

My husband and I were told when the divers would be in the tank so that we could go into the pavilion and watch our daughter swim from SeaBase (note that you would not be allowed to do this if you did not have a park ticket). There was quite a crowd observing the divers. Most people seemed unaware that DiveQuest was an option for guests. I even heard someone say that the divers “couldn’t be real.”

We watched our daughter in the tank and took countless photographs from inside SeaBase. She told us later that she could see us and could also see into the Coral Reef restaurant. But the thing she was most excited about was seeing all the marine life around her. Yes, there are real sharks, rays, turtles and a host of reef fish in the tank. The visibility was perfect and the water temperature was just right (around 75 degrees). 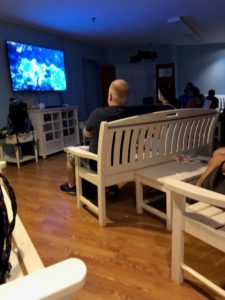 After the dive, everyone gathered to sip hot cocoa and watch the video of their experience.

After the dive, my daughter went to the women’s locker room where she was able to shower (toiletries, hair dryer, bathing suit dryer, and towel provided). Then the whole group met in a room to drink the provided hot chocolate and watch the video from the dive.  The dive master came and got my husband and I and brought us back stage so we could watch, too. We chose to purchase the video, which comes on a thumb drive, for $35.

All divers are given a special DiveQuest t-shirt or hat (your choice) that you can only get from participating in the experience. We were also told that this is one activity that Disney does not profit from – all proceeds go to marine life conservation.

My daughter gives this activity a resounding two thumbs up – when we met her after the dive, she told us it was the “most fun she’s ever had” at Disney, and that’s saying something!