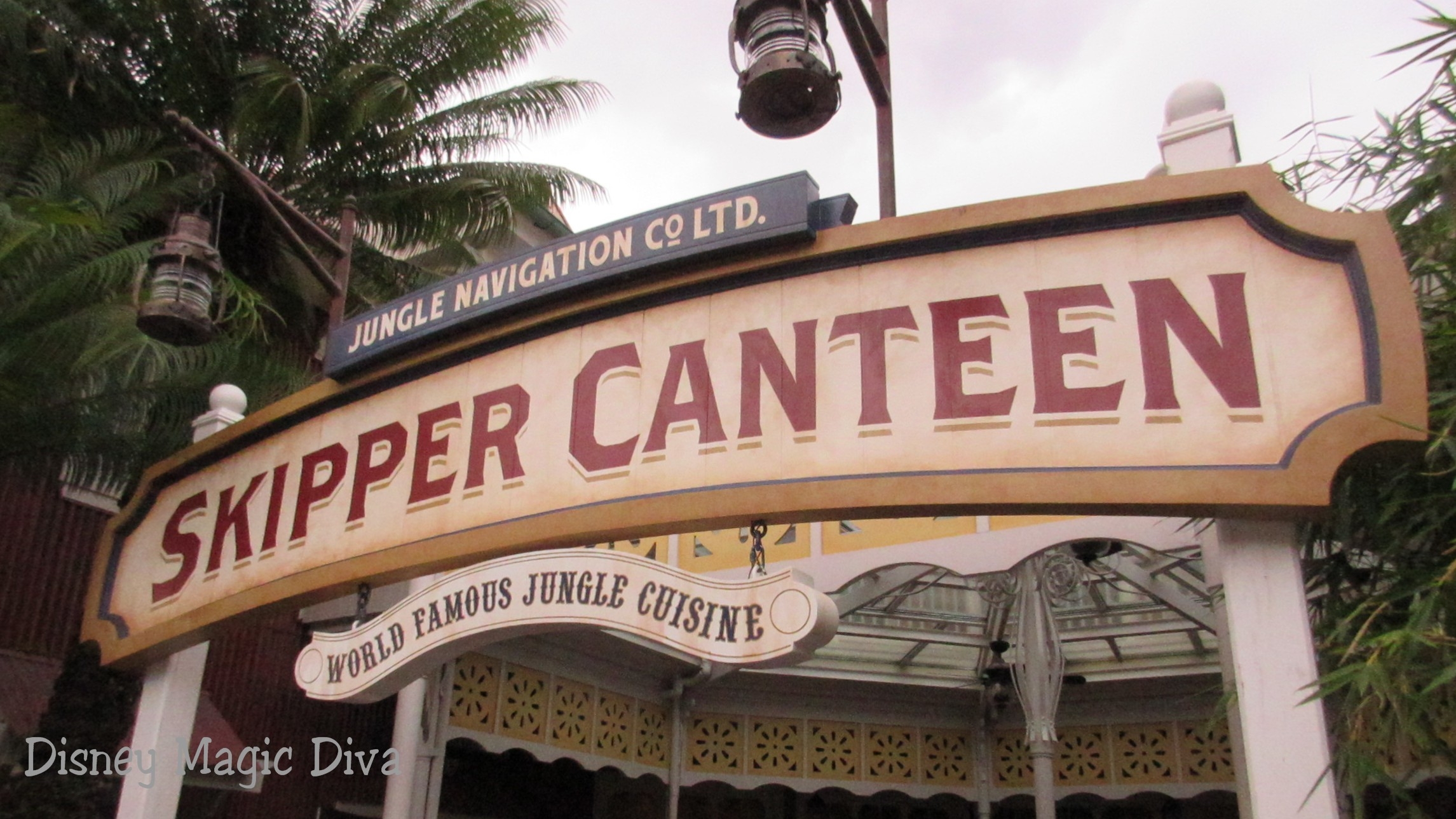 One of our favorite attractions at the Magic Kingdom at Walt Disney World Resort is the Jungle Cruise. It’s appropriate for all ages, shady, and full of corny jokes! Because so much of the ride reflects the personality of your Skipper, each ride is a new experience. (I still smile every time I think about the backside of water. If you don’t know what I’m talking about, you NEED to go on this ride!) So when the Jungle Navigation Co. Ltd. Skipper Canteen opened, and promised to have all the same fun and adventure of the Jungle Cruise, we knew we wanted to give it a try! 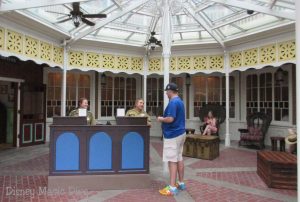 The Skipper Canteen is a table service restaurant located in Adventureland. It currently is 1 table service credit on the Disney Dining Plan, and only accepts same day reservations. It’s open for lunch and dinner, and serves African, American, Asian, and Latin cuisine. You can make a reservation by simply walking up to the check-in desk at the restaurant, or by using the My Disney Expericence app.

TIP: On our most recent visit, we tried to book a reservation through the My Disney Experience app as soon as our plane landed in Orlando. We were thrilled to get a table for the time we wanted, but when we entered our credit card information, it was continually declined. Baffled, we called Disney Dining, and were advised that it’s a glitch in the My Disney Experience app specifically for Skipper Canteen. Hopefully it has been addressed by now, but the lesson is if you have trouble with the app, just call! 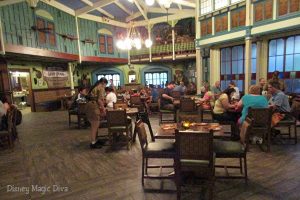 I must admit, we were a little intimidated by the menu. My family is pretty much a “meat-and-potatoes” kind of group, but we really wanted to try this new restaurant for the experience if not so much the food, and we knew there were some less adventurous choices available. Apparently, other guests have been hesitant to try the exotic cuisine, since it’s rumored that the menu with be undergoing a radical change. So if you prefer a more daring menu, be sure to check out Skipper Canteen soon!

When we arrived, we checked in and were asked for our telephone number so they could text us when our table was ready. We chose a comfy chair in the atrium, and relaxed. Soon, our text came through, and we were escorted to our table. 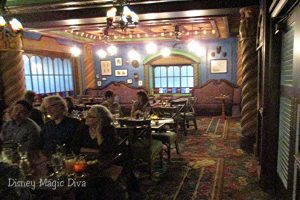 Falls’ Family Parlor. The photo doesn’t show it well, but the light fixtures are parrots!

Skipper Canteen has three distinct dining areas. The main dining room, the largest, is the Crew’s Mess. It is light and open, with wonderful, detailed décor throughout. The Jungle Room is themed after the Falls’ family parlor, and although we didn’t really have time to explore this room, we got to peak as we passed by, and would definitely be a reason to return. Our table was in the S.E.A. room – a secret room for the Society of Explorers and Adventurers. It is a small room, accessible by going through an extremely short passage-way, reminiscent of a secret door behind a bookcase. It was quite a treat! 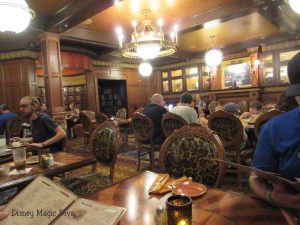 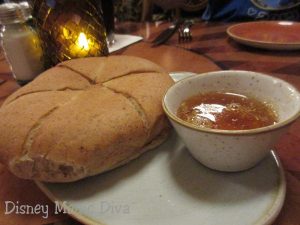 Delectable bread served with our entrée. The sauce was scrumptious! 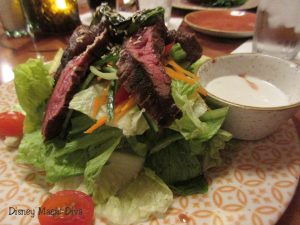 “A Lot at Steak” Salad

As with Skippers on the Jungle Cruise, servers at the Skippers Canteen can make an ordinary experience extraordinary. The corny jokes and puns are a favorite for us on the Jungle Cruise, and we were looking forward to an extension of that entertainment during our meal. Unfortunately, our server did not quite rise to the level of a truly memorable experience, but nevertheless was efficient and helpful – always a welcome characteristic for servers. When I ordered the “A Lot at Steak” Salad, she asked if I enjoyed Thai food. I hadn’t really tried it before, so I asked if it was hot (as in “spicy”) and she replied, “Burn your face off hot.” Wow! I would have been in trouble! Thankfully she warned me of that issue, and I was able to substitute with the more pedestrian choice of ranch dressing. The steak was plentiful although a bit on the rare side for my taste. The salad was a delightful assortment of greens with carrots, red peppers, cucumbers, red onions and cherry tomatoes. 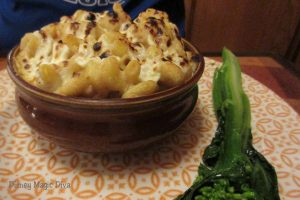 My son chose Skip’s Mac & Cheese and he was thrilled with his choice. It was a layered dish with spiced ground beef, pasta, and Bechamel Sauce, which, we discovered, was a white, creamy sauce which he found similar to Alfredo sauce. He said he would absolutely order this again!

We enjoyed our entrees so much we weren’t able to indulge in dessert. But if the menu does change in the near future, it gives us a reason to return and enjoy another meal (and this time dessert!) at Skipper Canteen.

So were we happy we tried it? You bet! It’s an entertaining choice for a meal, and if you don’t believe that, you must be, as the Jungle Cruise Skippers say, in “de-Nile!”