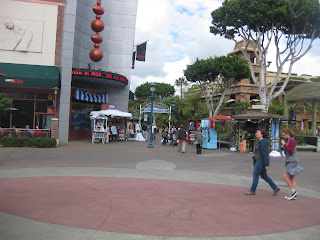 One of the many things I love about the Disneyland Resort is that everything is within walking distance from one another. For example, if you were spending the day at California Adventure and had lunch reservations at the Rainforest Cafe in Downtown Disney, it would be no big deal as you could just get a hand stamp and walk over to the restaurant, and then walk back to California Adventure when you were through. Even the Disneyland Hotel and the Grand Californian Hotel are within walking distance to BOTH theme parks and Downtown Disney.

Downtown Disney in Anaheim opened in January 2001. It sits in what used to be known as the Disneyland parking lot. As a Disneyland local, I can remember riding parking in this lot and it is sometimes hard to believe all the magic that has been created with Downtown Disney and California Adventure in the past twelve years. Several shops and restaurants have changed within the Downtown Disney district in the years since it has opened.

There are several places where live entertainers perform throughout the district. I have seen violinists, drummers, guitarists, singers and even Tony Hawk working his dancing moves on a portable skateboard ramp next to the ESPN Zone at Downtown Disney. There seems to be more entertainment on weekends.

If you are not interested in live entertainment, there is always the AMC Movie Theater. The latest movies play here and it can be a welcome rest for your feet after walking all day in the theme parks.

This year, during the holiday season, an ice skating rink was set up!

There are also musicians who play at restaurants such as House of Blues, Ralph Brennan’s Jazz Kitchen and Tortilla Jo’s.

For kids, the Lego Store has several areas set up outside the store itself for building, which means hours of entertainment for D’land Diva son (and if I’m honest, D’land Diva hubby).

For sports lovers, the ESPN Zone provides some entertainment inside and has hosted athletes such as this past Winter when Josh Hamilton was introduced as the newest Angels Baseball Player in a press conference (Go Angels!).

If you are looking for a fun place to hang out, this is it!