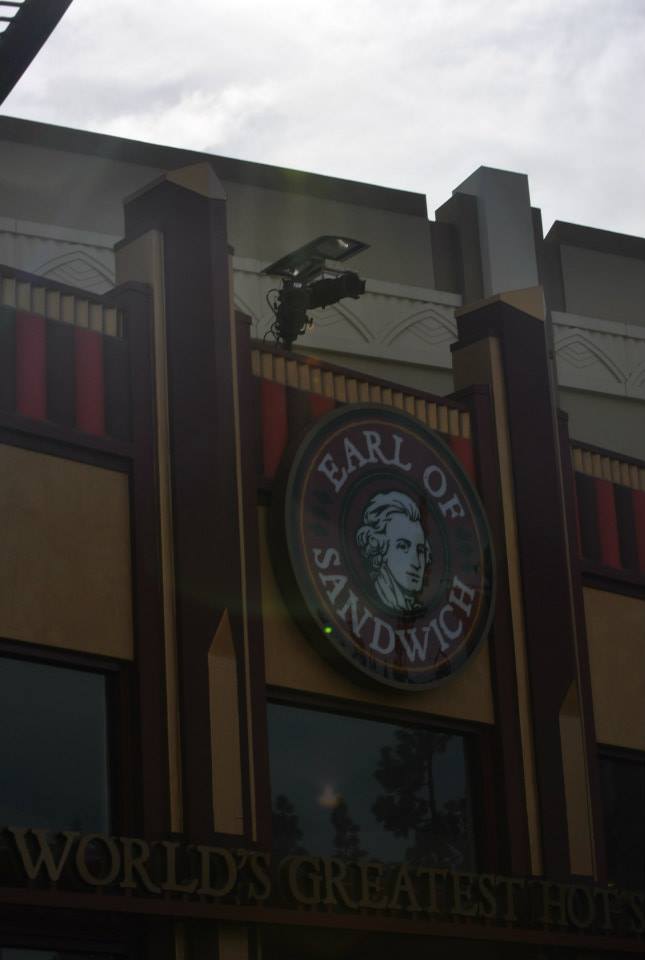 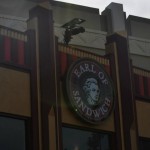 When my husband and I were planning our Disneyland vacation, I told him that I would pick where we ate at Disneyland, and he could choose where we ate at California Adventure or Downtown Disney. So after perusing the restaurant list from Disney’s website, I kind of rolled my eyes when I saw where my husband had picked. He chose “Earl of Sandwich”, a place I had never heard of, and somewhere that I was sure was a glorified Subway. (Not exactly what I had in mind for being on vacation). That being said, I browsed the menu and admitted that it did indeed look like there were several delicious looking sandwiches and wraps  on the menu, and we agreed we would try it out.

When we arrived in Downtown Disney for lunch, I was still kind of skeptical- particularly when I realized that The Earl of Sandwich is the last when you’re heading there from the theme park.

Disney Diva Tip: It’s located right across from the ESPN Zone, and the Disneyland Hotel, so if you’re staying at the hotel, this could be for you to grab a quick bite.

But from the moment we walked in, all of my skepticism melted away, and let me tell you, it was a WONDERFUL experience. First, it smells delicious!! Secondly, they have a wide variety of sandwich and wrap options, as well as side dishes (chips, macaroni salad, yogurt, fruit cups, etc.) and lots of desserts, such as brownies, cookies, and cupcakes!! 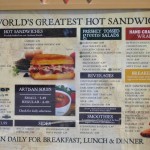 And, can I just say how EXTREMELY friendly and VERY helpful their staff is? Not only did they answer all our questions, go back to retrieve the peppermint brownies I had missed and wanted to get, but they also cleaned our table before we sat down! They also told us where we could find other locations (my aunt who is NOT a sandwich person was extremely impressed and wanted to know if they had any other locations nearby- turns out, that’s the only one in California… they’re more of an east coast chain). In fact, one of their staff members, Raven, was very helpful and went above and beyond…. When I asked if I could take his picture, he told us he’d wash his hands first, and then I realized he thought I wanted him to take a picture of us! He was so surprised when he realized I wanted a picture of him. I think it made his day. J But he was a great employee… and really did make our experience a great one. I hope he gets a raise!! 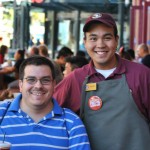 Other than that, the tables weren’t too crowded… there was plenty of seating, and the benches were comfortable. They were made of wood, and could easily fit our party. They were also well spaced, and we had no problem fitting our strollers at the end of the table. Everything seemed very clean and organized, and we were all impressed, particularly with their efficiency! We had no sooner finished filling our soda cups when our food was ready. 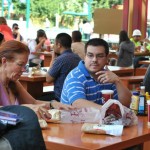 And speaking of food, this is how it works: You basically tell them what you want sandwich or wrap-wise, and then you proceed down a buffet line piling on desserts, chips, sides, or drinks. At the end of the buffet you give them a piece of paper with your sandwich or wrap order, and they add up the total. There are two drink options- bottled drinks or fountain drinks. We opted for the fountain drinks. They also have condiments on every table, and lids, straws, napkins, cutlery etc. located next to the fountain drink dispensers.

As far as the food goes, for the two year olds in our group, a cup of grapes worked great- particularly since both girls can be picky eaters and both girls LOVE grapes. And while $2.49 for a cup of grapes may seem expensive, at least it was a fresh, healthy snack that they actually finished.

My husband was the only one in the group who actually ordered a sandwich. He had the American sandwich, and thought it was really good. On a scale of 1-10, he gave it a 10, and said he would definitely order it again. I had a bite of his sandwich, and to me, the bread stood out the most. It was fresh, and tasted like toast. But his sandwich was nice and heated and overall had a good flavor. He also had a bag of barbecued chips, which were prepackaged, and a red velvet cupcake, and he thought those were both all right. He’s not big on sweets in general, but he said he did like the cupcake. 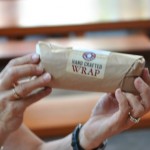 My aunt and I both had wraps. My aunt ate the Baja chicken wrap and I had the buffalo chicken wrap. We also both had peppermint brownies (which are seasonal), and those were pretty good too…. Though mine was a little hard and tended to stick to the paper from the bag. The wraps were really delicious…. I liked mine, but I also took a bite of my aunt’s, and I have to admit, if given the choice, I’d order the Baja chicken wrap. It just had a really nice zesty flavor…. the dressing on it was really flavorful, and it had a nice zing to it. My wrap was definitely good, but it didn’t quite pack the punch that the Baja chicken wrap did. Also, as stated before, my aunt really isn’t in to wraps or sandwich places, and she definitely said she’d eat there again. She also rated her wrap as a 10. I gave mine a 9… which may be a little biased after eating some of the Baja chicken wrap, but I came to that based on I wish the wrap would’ve been a little bigger (but then again, I can eat a lot, especially on a day where I walked almost 11 miles around Disneyland… no joke. My pedometer told me.) 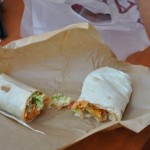 That being said, it was a great lunch… the food was great, the service was great (and fast), the staff was friendly and efficient, the benches were clean, and we all agreed we’d eat there again. So it’s definitely more than a glorified Subway… and at least from our experience, 3 adults and 2 toddlers would all recommend you eating there. J

So if you want a great (not to mention affordable and healthy) lunch in Downtown Disney, feel free to hike all the way down to Earl of Sandwich… it’s well worth the walk. J