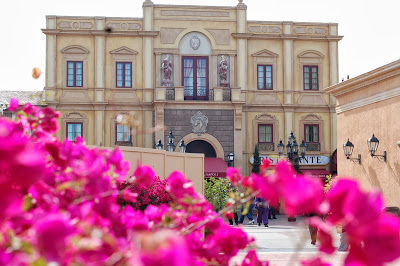 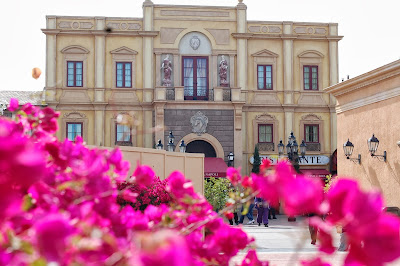 I have 2 hobbies. Disney and beer. I don’t mean any beer, I mean really good, craft beer. So when planning our trip to Walt Disney World this year, and, more specifically scoping out the beer selection at Epcot’s International Food and Wine Festival, I was very happy to see that there would be a Food and Beer pairing at Italy during my visit.

These events will be held every Tuesday during the festival at Via Napoli, located in the back of the Italy Pavilion in World Showcase from 1:30 pm-4:00 pm.

I attended the tasting on 10/1/13 with my friend Tom.We arrived at about 1:15 and checked in at the podium, where we were asked if we had any food allergies. I said I was allergic to shellfish, and this was noted next to my name. We were told they would be calling us all at 1:30 pm, so, while we waited, we had a beer to “prime the pump,” so to speak, at Tutto Gusto, located next door, where they have a small, but wonderful selection of craft beer.


Tip:  The beer at Tutto Gusto is expensive, and you want to enjoy what you order, so ask for a sample first, they are more than happy to give you one, and also ask for a description of what you are drinking.

But back to the event! We waited in the courtyard until exactly 1:30 pm, when we were all called by name by the manager, Gabriele, and brought in one group at a time and escorted to our table in the main dining room. 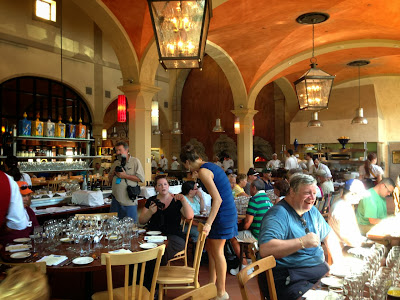 Gabriele gave us a short introduction to our beer expert, Jacquelyn, and explained that this event is usually held in the glassed in area off the courtyard, but it is being refurbished, and we were told behind schedule, as it was supposed to be completed in time for this event. 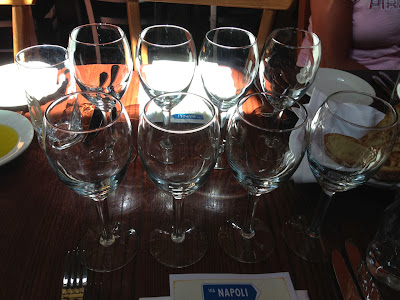 The menu for our event: Note: The event menu changes each week! I found a site that has these menus, but of course, these are subject to change. 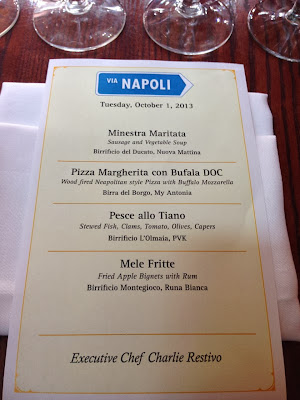 We were at a table for six, with 3 seats one side, and 3 booth seats. I wound up in the middle booth seat.
Tip: Avoid a middle booth seat if possible! I’m not sure if it was because the angle was awkward for the servers to pour, but I seemed to get a short pour each time. They were fairly good about quick refills upon request, but they were busy, and I was often empty. 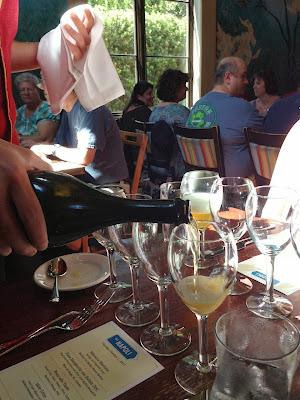 The first beer served was the Nuova Mattina from Birrificio del Ducato, a Saison Farmhouse style ale, which was paired with Minestra Maritata (Minestrone soup). 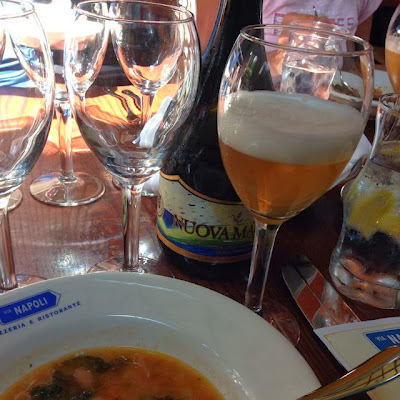 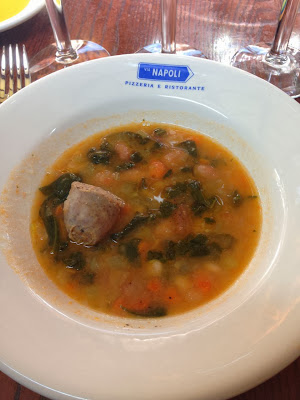 Jacquelyn came around to each table and explained the characteristics of the beer, how to taste the beer properly, where it was made, and how and why it paired with each food. 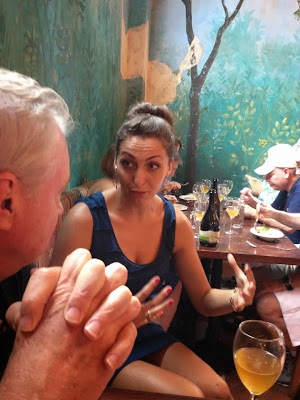 I’m going to be honest. I read Draft Magazine, a magazine for “beer enthusiasts” but I am by no means a beer connoisseur, just as I don’t consider myself a foodie, but I know what I like, and Saisons are one of my favorite beer styles. It paired wonderfully with the soup.

The second beer was My Antonia from Birra del Borgo, an Imperial Pilsner, which was served with the Pizza Margherita con mozzarella bufala (Margherita Pizza with Buffalo cheese). 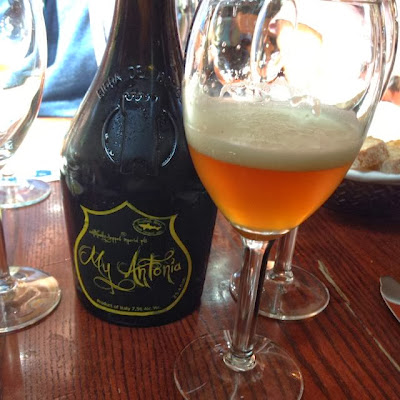 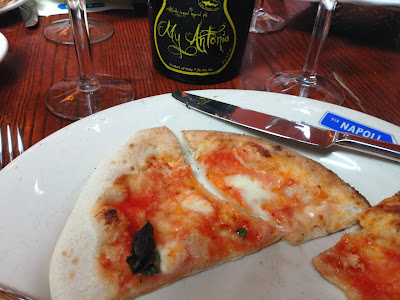 This was very hoppy beer, which paired with the sweetness of the tomato sauce. I am not a big hops fan however, so this was my least favorite of the 4.
Next up was the PVK from Birrificio L’Olmaia, a wheat beer. I’m a wheat beer fan, and this was my favorite of the group.
Before the dish was served, Gabriele came to our table and told me that because the next course contained clams, that I would be served a veal cutlet. I said that would be fine. To be honest, I am not allergic to clams, but as I felt they had gone out of their way to accommodate me, I went with it.
The table was served the Pesce allo Tiano (all’Acqua Pazza), which I was told was very good, and paired well with the beer. 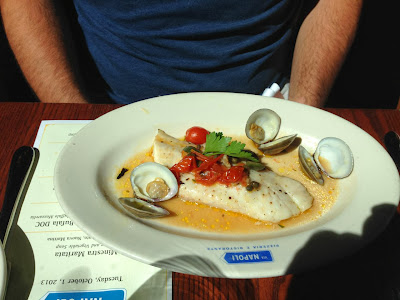 My veal was terrific. I really wasn’t concerned by what paired with what at this point, as I was feeling pretty good! 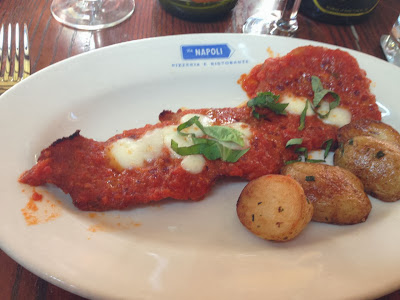 As I said, I’m a wheat beer fan, and I hope to find PVK at a local beer store! 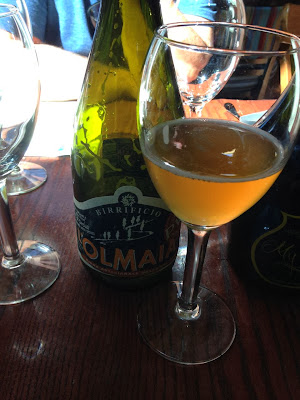 We finished strong with my second favorite beer, Runa Bianca by Birrificio Montegioco, a Witbier, and a really delicious dessert, Mele Fritte (Bigne di Mele al Rum) (fried apples with rum). Since I’m no expert, I really can’t tell the nuances between a witbier and a wheat beer. This was a little sweeter than the PVK, and was excellent with the apples. 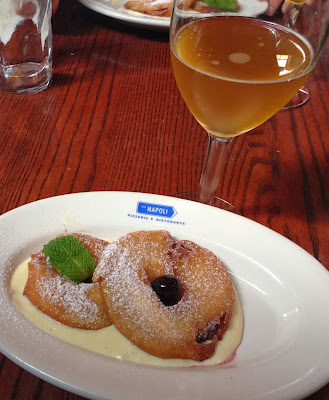 It was now time to say goodbye, and the head chef, Charlie, came around to each table to ask how everything was. 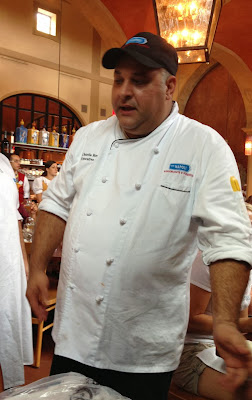 Gabriele thanked us all for coming, and asked us to applaud the staff that made this event memorable. 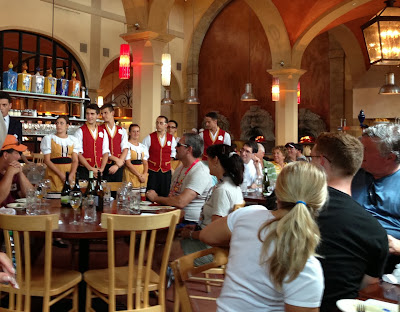 So, is this event worth the $55+ tax price tag? Tom and I absolutely think so. If you enjoy good beer and good food, this is a total winner. It’s also one of the more reasonably priced of all the special Food and Wine events.
If you are not a beer lover, then you probably wouldn’t be interested in this event. I say probably as opposed to definitely because at our table there was a couple where the wife didn’t like beer, and her husband drank her pours. I actually thought this was a good idea at the beginning of the meal, and regretted not bringing my wife along. But by the end, I couldn’t imagine drinking THAT much. I’m in no way judging the other person, they could clearly handle their alcohol better than me, but I would say you’d be better off not attending this event unless you like beer.
Share this...