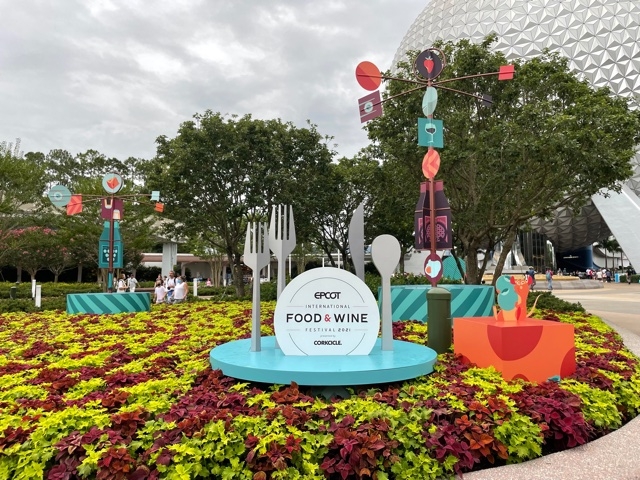 I recently had the chance to attend Epcot’s International Food & Wine Festival 2021 just days after it opened. While it was definitely not as robust an event as in years past, it was still amazing to be able to once again snack and sip around the park. Here are a few of my favorite tastes from this year’s festival. 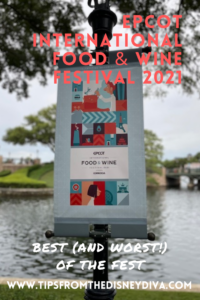 My favorite booth this year was a new one – Tangierine Café: Flavors of the Medina. This was not your standard stand-alone kiosk: rather, it was set up in the former counter service restaurant space in Morocco. This popular spot has been closed for many months, and it was exciting to see it open, even if it was only serving a limited range of menu items. 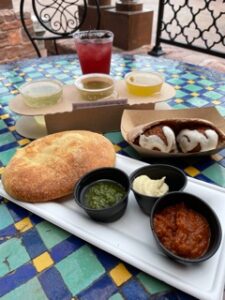 The Tangierine Cafe in Morocco was a favorite booth this year.

We ate at this booth twice (on different days). The Fried Falafel Pita ($5.25) featured two falafels drizzled with tahini sauce in half of a piece of pita bread. It was very filling and along with the Stone-baked Moroccan Bread with Hummus, Zaalouk, and Zhoug dips ($5), served as my lunch one day. The bread was super fresh on both days that we ordered it – so fresh that I had to wait for them to finish baking it in the oven.

Tip: Grab a festival passport and a map as you enter the park. This is your guide to the festival and lists entertainment and all the booths. They are listed in order if you head right when you enter the World Showcase.

The dips that were served with the bread were incredible. I was familiar with hummus but not the other two. The Zhoug dip is a slightly spicy cilantro-based dip with garlic, olive oil, jalapenos, and spices. It was my favorite. My husband loved the Zaalouk so I looked up what was in it – it’s a smooth tomato and eggplant-based dip. When I broke the news about what was in the dip, he paused (he hates eggplant) and then continued to eat it. It was that good.

The one downside was that there wasn’t nearly enough bread served with the three dips. My husband ended up eating the Zaalouk with a spoon!

My father-in-law ended up eating the Moroccan-spiced Lamb Kebab with Couscous, Tomato-Onion Salad, and Garlic Aioli (5.75) three times. All the tastes from the Moroccan booth were reasonably priced and had decent-sized portions 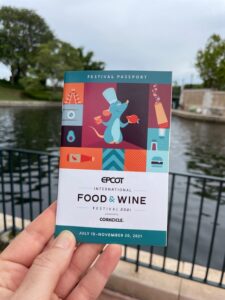 Another favorite was Australia’s Roasted Lamb Chop with Sweet Potato Puree, Bush Berry Pea Salad, and Pistachio-Pomegranate Gremolata ($8.25). The lamb was very tender and we really liked the puree that it sat on. We also had this twice during our stay.

Tip: Go on a weekday if possible. Lines will be much shorter. Popular booths that had long queues on a Sunday afternoon had no wait on Monday. 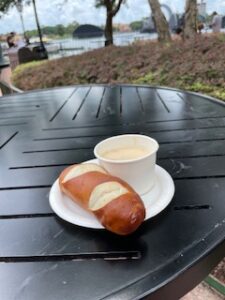 Canada’s Canadian Cheddar and Bacon Soup ($5.75) served with a pretzel roll is a perennial favorite, and we ordered it despite the oppressive heat.

One of the best surprises was that the day we arrived, a slew of booths opened nearly two months early. Many of the kiosks were set to open on October 11, but most of them opened in mid-August.

My last favorite pick comes the Refreshment Outpost near China. Spicy Githeri ($4.75) is a plant-based dish with White Beans, Pigeon Peas, Ben’s Original Quinoa & Ancient Grains Medley, and Kachumbari slaw. It was a generous portion and quite good, with varying textures. It was well-seasoned but not overly spicy (despite the name).

The days I attended the festival were brutally hot and humid, so it was a bit of a relief to find out that some of the booths are indoors this year.

The Canadian Pavilion is hosting one such kiosk, Appleseed Orchard, in its Canada Theater venue, where Canada Far and Wide in Circle-Vision 360 was shown in the past. 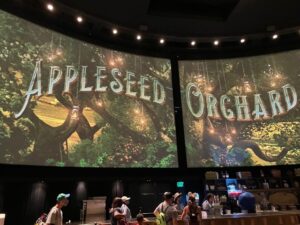 The Appleseed Orchard was a welcome break from the hot sun.

This booth features a variety of apple-based drinks and tastes. The non-alcoholic Frozen Apple Pie ($4.50) was very refreshing and tasted just like what its name suggests.

My husband was a big fan of the Kilkenny Irish Cream Ale ($9) from the Ireland booth and also the Left Hand Brewing Bittersweet Imperial Coffee Milk Stout ($9) from the Donut Box (found near Test Track).

Tip: The booths close before the park closes. So make sure to grab your snacks before they shut down for the night.

My favorite sips of the Festival came from (and this may not surprise you!) Tangierine Café. The Fig Cocktail with White-Cranberry Juice and Fig Vodka ($11) sounded exotic and it was. The cranberry was not overpowering and you could taste the subtle fig notes in there. The drink was also very visually appealing – it was decorated with star anise on the top – and as you sipped it, the aroma of the spices really added to the overall taste profile. 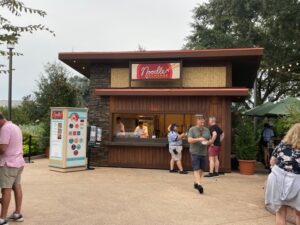 The Noodle Exchange booth was new this year.

We also really liked the cider flight ($9.75) here – 3 Daughters Brewing Fig Hard Cider, Bold Rock Ginger Turmeric Hard Cider (the ginger was more taste-forward here than the turmeric), and Woodchuck Cinnamon Nutmeg Hard Cider, which tasted like fall even if the outside temperatures didn’t feel like it. 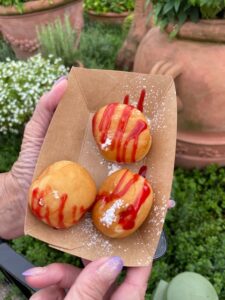 The Bomboloni, a Cream-filled Italian Doughnut, was one of the rare misses at the Festival.

The first one was the Sriracha-glazed Donut ($5)  from the Donut Box. It wasn’t the hint of spice that bothered us, it was the fact that it tasted somewhat stale and greasy. We ended up throwing it away.

The second miss was an expensive one: the Bomboloni from the Italian booth, which rang in at a whopping $11. This was described as a Cream-filled Italian Doughnut with Raspberry Sauce and Powdered Sugar. It tasted like a below-average filled donut hole. There was very little sauce on there, either. I would give this one a hard pass.

Patricia at All for Dreams Travel helped me plan my vacation for FREE! Contact her for a quote; she can help you with all your travel needs.