Erin McKenna’s Bakery at Disney Springs: a Great Option for Vegans and Those with Food Allergies! 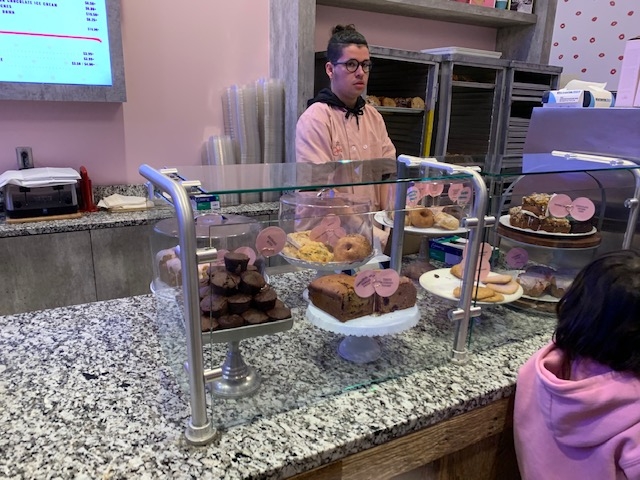 If you are heading to Disney Springs, which is currently open while the Walt Disney World theme parks will start a phased reopening next month, and are a vegan or have food allergies, then you will want to check out Erin McKenna’s Bakery NYC. This outpost of a famous New York City bakery was at the top of my daughter’s list of must-visit places when we traveled to Orlando a few months ago. 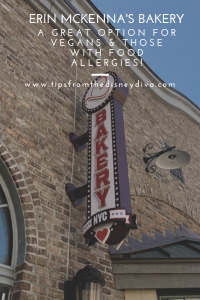 Erin McKenna’s Bakery opened in the East Side of Manhattan in 2005. New York magazine named their cupcakes the best in New York. There are only four locations worldwide: New York, Los Angeles, Santa Monica, and Disney Springs. So, when my teenage daughter became a vegan last year, she was very excited at the prospect of trying these baked goods. 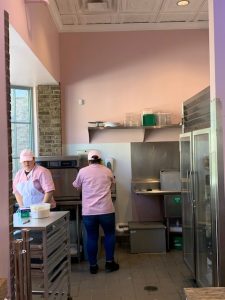 The bakery has an open kitchen where you can watch the goodies being made.

We had passed this bakery a few times on previous visits but had never ventured inside. It’s located in the Landing at Disney Springs, on the backside of Raglan Road and just around the corner from Terralina and the Boathouse.

There are so many different things to try at this bakery that we ended up going twice during our short, four-day stay.

Tip: For the biggest selection of baked goods, visit the bakery earlier in the day. By nighttime, many sweets are sold out.

The bakery is small, and there is just one metal table outside the door. The first time we went, which was late one evening, we took our baked goods back to our Pop Century resort room. When we next went, it was the last morning of our trip and we ended up carrying our goodies over to a brick wall across the way. 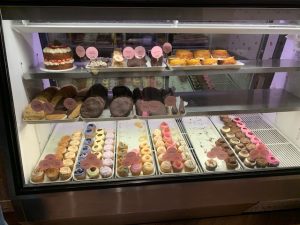 The thing that stands out about this bakery is that from the very beginning, there have been two rules: 1) Create a bakery free of harmful ingredients 2) wear cute uniforms.

Indeed, not only do the cast members here wear pink uniforms and baseball caps, everything they serve is gluten-, dairy-, wheat-, egg-, refined sugar-, and soy-free. It’s also Kosher. This makes it a perfect choice for people with food sensitivities/allergies and as well as vegans.

(On a side note, I did not realize how many foods are not vegan or even vegetarian until my daughter researched and then became a vegan. Many kinds of cheese, for example, are not vegetarian since they use rennet – I won’t describe it here, but look it up if you’re interested! And many bleached flours and refined sugars use bone char in the processing.) 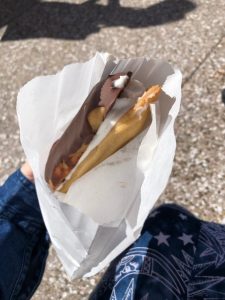 The eclair looked great but was a bit disappointing.

My daughter thought most of the items here were great, especially the ice cream sandwich. The one thing she didn’t like was the éclair. It looked the part, but the pastry was a strange texture. 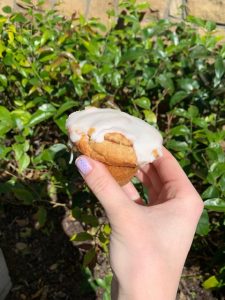 Tip: While Disney has suspended the Dining Plan for now, in the past, Erin McKenna’s Bakery has accepted the DDP. This would be a great use of a snack credit!

I had a little bit more of a mixed opinion on the baked goods: I liked the crumb cake and the tea cake, but there was something a bit odd about the texture of some of the other baked goods. I totally get that it is a fabulous option for those with food allergies, but if I was only wanting a yummy baked good, I might go elsewhere.

Aside from the storefront in Disney Springs, you can also find Erin McKenna’s baked goods at various spots around the parks and resorts, including Art of Animation’s Landscape of Flavors, the Boardwalk Bakery, and Animal Kingdom.

Prices here are a bit high, but really on par with other Disney eateries, which is amazing considering that they use many specialized, expensive ingredients, such as Bob’s Red Mill gluten-free flour. We were very happy to find that they do offer a 15% military discount here (although we forgot to use it on our first visit!).

Have you ever tried this bakery? What did you think?

For FREE, expert help planning all aspects of your Disney trip, reach out to Patricia at All for Dreams Travel.