Everything You Need to Know About Disney on Ice Presents 100 Years of Magic! 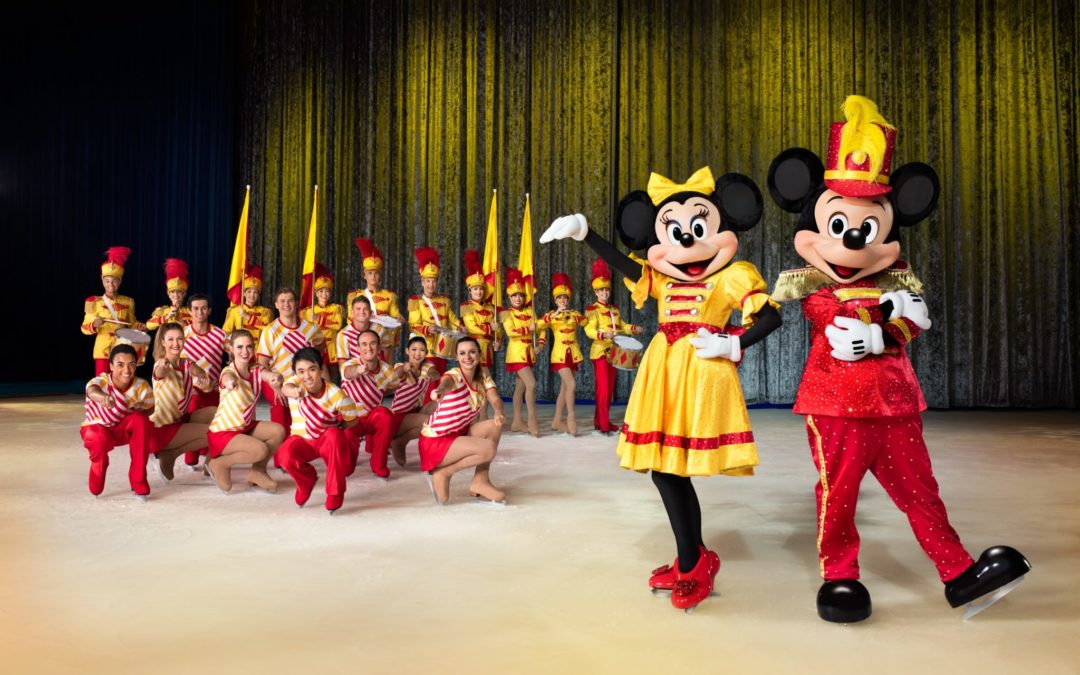 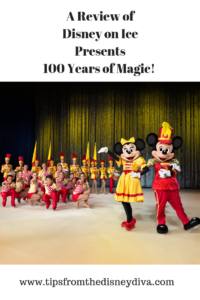 Fall is my absolute favorite time of the year. I love everything about the cooling weather, pretty falls leaves, pumpkin patches, and of course DISNEY ON ICE!!!  And let me tell you, I was more excited than ever this year! Disney on Ice presents 100 Years of Magic!, also has a special pre-show celebration for Minnie and Mickey’s 90th Birthday, which promises a lot of celebration in one show! This show is packed with a variety of characters from the Disney Classics, from Mickey, Minnie, Goofy, Donald, to  the Disney princesses, as well as some of your favorite and recognizable characters from Aladdin, Finding Nemo, Toy Story, Mulan, Pinocchio and of course Frozen. This show truly has something for everyone!

So let me start out with the basics:

Getting there: For those of you in the northern California area, Disney on Ice presents 100 Years of Magic! is currently playing at the Golden One Center in downtown Sacramento, California. We had an easy 45 minute commute, but I credit that to us leaving plenty early for the show. I have seen traffic back up on the exit, but that is most common if you get arrive 30 minutes or less before the start of the show. Parking is so easy. Just go to Sacpark.org and reserve a parking spot in the parking garage of your choosing. Prices range from around $10-25 depending on how far you want to walk. I usually pay around $15, and walk less than two blocks.

Know Before You Go: The good news is you want to be there early! There are picture opportunities, snacks, souvenirs… Make sure to give yourself plenty of time so you are not stressed, especially with kids. There is not a bad seat in the house. The Golden One Center is huge, but the staggered seats allow anyone in the audience a good seat.

Now the fun part…the show itself! I think Feld Entertainment really outdid themselves this year. The show starts with a parade with Olympic level skaters, led by none other than Mickey himself. The skaters were throwing triple axels and backflips, but the screams came for Mickey, Minnie, Goofy and Donald as the audience broke into cheers and applause.

The Show Itself: The premises of the show is that Goofy and Donald are trying to come up with the perfect gift to celebrate Mickey and Minnie’s 90th birthday. This sends them on an adventure as they reflect on several Disney classics that have been released over the decades.

We first see Pinocchio who begins the scene by singing “I’ve Got No Strings” while dancing along with  beautiful marionnettes that filled the rink. It was such a great experience to see a classic Disney character not usually featured in other shows and it left you wanting more from Pinocchio. 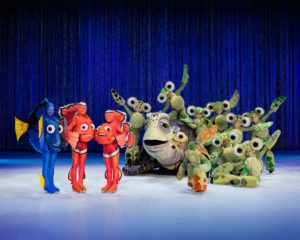 Some of the other highlights from the show included scenes from Disney Pixar’s Finding Dory, featuring Dory, Nemo, Marlin, Dory’s parents and a giant version of the sea turtle, Crush (as well as lots of adorable baby sea turtles). The baby sea turtles broke into song during their performance, which was a nice addition not previously featured in the Finding Nemo movies. You also get a brief view of Snow White, Cinderella, Jasmine, and Tiana, with their princes, and a much longer segment featuring Beauty and the Beast. During the Beauty and the Beast segment, there is a surprise burst of lightning that actually made me jump! Belle, Gaston and the Beast had the audience cheering and the pyrotechnics were quite impressive throughout the entire show, particularly in the Frozen segment where audience members were delighted to see falling snow cascading down upon the arena. Unlike other Disney on Ice productions, Frozen rounded out the first half of the show instead of being the finale.

Disney Diva Tip: Intermission is short! Don’t waste time trying to purchase snacks at concessions stands and if someone in your party needs the bathroom, make sure to go right away. This is definitely a situation where you need to “Do what you need to do and get back” because you don’t want to miss the second half! 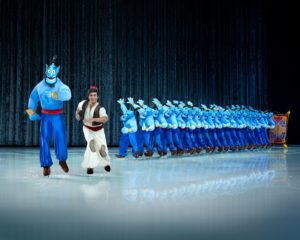 Aladdin, the magic carpet and a myriad of genies dazzle while performing “A Friend Like Me”. The crowd was definitely getting into the performance, particularly when the genies started the conga line. I think out of all of the Disney on Ice productions I’ve attended, the audience participated the most in this one, and there were constant cheers from the audience as they clapped along.

The Toy Story segment began with the toy soldiers who perform their own song and skating routine. Next, Woody appears and tells the toy soldiers to open a present, at which time, Buzz Lightyear is revealed, much to the audience’s delight as they broke into cheers once again. Jessie then makes her appearance and joins the others. Although my son was disappointed that Rex and some of the other Toy Story characters weren’t featured in this segment, any trace of sadness faded when Buzz Lightyear did a backflip on the ice. 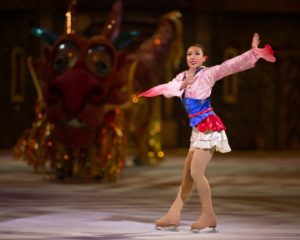 While these scenes were impressive, the beauty from the Mulan segment was like no other. The Mulan segment followed the original storyline pretty closely and included the songs, “Reflection” and “I’ll Make a Man Out of You”. Not to be outdone and showing off in true Mushu style, Mushu made an impressive entrance. Mushu was cleverly designed to look like a traditional Chinese dragon you might see in a parade, only this dragon skated along with ease, which made its movements look even more graceful on the ice.

Another crowd favorite and more comic relief came from Timon and Pumbaa in The Lion King! Rafiki came out first, followed by Timon and Pumbaa who exchanged banter, cracked jokes, and had the audience dancing and singing along to “Hakuna Matata” before Simba and Nala came out and did a very soulful routine to “Can You Feel the Love Tonight?”.

The audience loved it and were dancing and singing along more than any other show I have been to, making this particular show really stand out.

The show ended with the song, “Circle of Life” where the whole cast came back onto the ice before transitioning into the song, “When You Wish Upon a Star”, the ultimate Disney song that truly sums up everything Disney productions have stood for as they celebrate their legacy and Goofy and Donald are now satisfied that they have found the perfect present for Mickey and Minnie’s 90th birthday.

Trust me, this is a show you do not want to miss! Hurry and grab your tickets now to catch Disney on Ice 100 Years of Magic at the Golden One Center playing November 1st-4th. Disney Diva Tip: Plus Sacramento, added bonus!! The Sacramento Ice Skating rink located in Downtown Sacramento is now open, so you can spend the day downtown ice skating before you head over to the show. November 2, 2018, is opening day for the skating rink and tickets are discounted to only $2. November 3, 2018, is Princess and Superhero Day… Your favorite princess or superhero can skate right along side theirs!

*Disclaimer: I am a Feld Family Ambassador, in exchange for my time attending and reporting my opinion of shows on this blog, as well as reporting to you the latest discounts offered, Feld Entertainment has provided me with complimentary tickets to Feld shows and opportunities to attend private Feld pre-show events.  Though I do receive these benefits, I ALWAYS give an opinion that is 100% mine.