Festival of Fantasy Parade at the Magic Kingdom 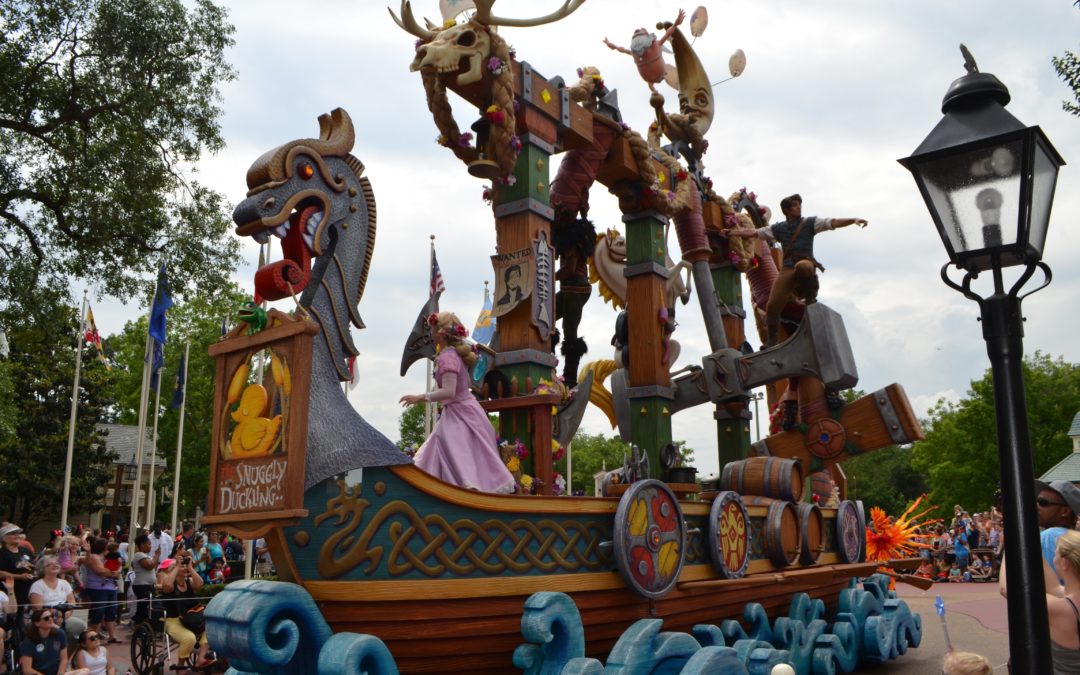 Parades abound at the Disney Parks, and everyone has their favorite.  For me and my family, one of the newest parades to burst onto the scene is our favorite–the Festival of Fantasy Parade at the Magic Kingdom.  This is an afternoon parade that replaced the Celebrate a Dream Come True parade in March 2014.  Disney Festival of Fantasy begins in Frontierland at 3:00 and travels down by Pecos Bill’s, turns in front of the Hall of Presidents in Liberty Square, circles the Hub in front of Cinderella Castle, travels down Main Street, circles the flag pole, and exits near the Main Street Vehicles building.  It is bright, colorful, features some of the most popular and classic Disney characters and movies (with some newbies), and has some fun, catchy music that will be stuck in your head all day!  Here’s the run down:

The parade begins with a group of dancers proclaiming the arrival of the parade. 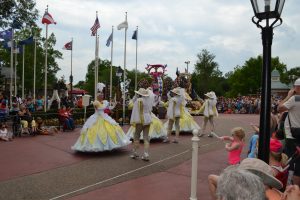 The first float in the parade features some of Disney’s most popular princesses and their counterparts:  Belle and the Beast, Cinderella, Tiana and Prince Naveen, and the ever popular Elsa and Anna.  **Cue the squeals and mad waving from the little girls (and some grown women) in the crowd.** 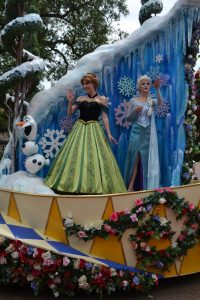 Next up is the Tangled float complete with Rapunzel herself, Flynn Rider, a ruffian and thug or two, and is preceded by a giant Ulf, the ruffian whose dream is to be a mime. 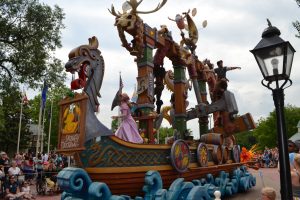 The next float arrives straight from under the sea and features Ariel, Sebastian, Flounder and several colorful dancers.  Ariel is perched atop a clam shell and playfully flips her fins to the music as she rides by and waves to parade watchers. 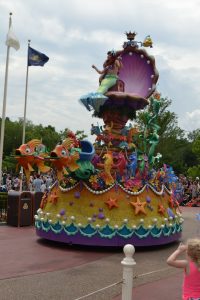 A crew of dancing Lost Boys separate Ariel and her float from Peter Pan and his crew in their float that includes Wendy and Captain Hook followed by Mr. Smee and the Tick Tock Croc!  Tinkerbell sits on the back of the float waving her wand and her hands and just looking downright adorable. 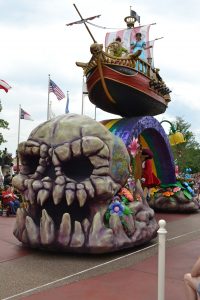 Merida from Brave “can fly and soar” atop a giant bagpipe as she rides behind her crew of kilt-wearing dancers. 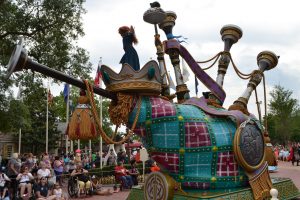 A trio of fairies make way for the menacing Maleficent Dragon from Sleeping Beauty who is being fearlessly fought by Prince Phillip himself as he is surrounded by thorny stilt performers and dancing ravens.  The dragon actually breaths fire which is crazy impressive, but my camera flaked out on me every time so I didn’t get a picture with fire. 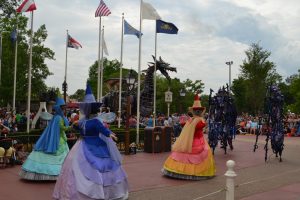 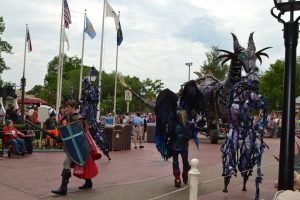 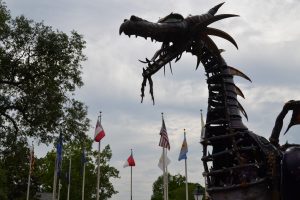 This is also these only frightening part of the parade, which is why my daughter chose to hide behind the stroller until Maleficent was gone! 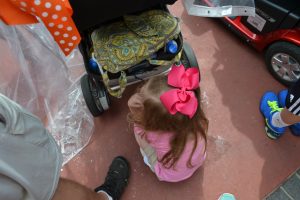 Snow White and all seven of her dwarfs along with Jiminy Cricket, Alice, White Rabbit, and the Mad Hatter walk behind the dragon and lead the way for the grand finale of classic Disney characters:  a float featuring Pinocchio riding on top of Monstro the whale’s head while Dumbo sits on his tail. 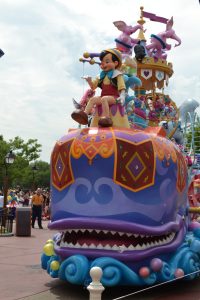 Donald, Daisy, and Pluto wave to their adoring fans as they glide down the street on a Fantasia-inspired float. 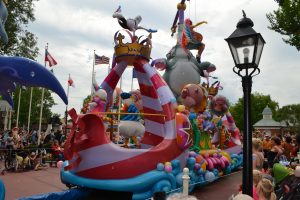 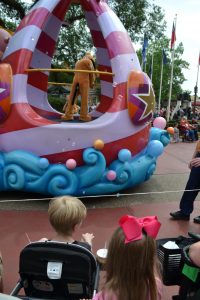 Goofy, Chip and Dale dance along the street flanked by costumed dancers and make way for the final float featuring none other than Mickey and Minnie themselves! 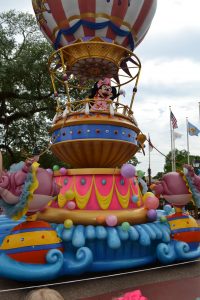 The costumes on the dancers are really what throws this parade over the top!  They are bright, elaborate and completely overboard, and I love them!

Everybody has their preferred way of doing Disney parades, but I will give you Daisy Diva’s parade tips for the Festival of Fantasy parade.

So next time you are at the Magic Kingdom in the afternoon, be sure to catch this parade.  It is super fun and a great way to grab a snack and rest your feet for half an hour or so before taking on the rest of your day in the park.

Ready to book your next vacation? Contact Patricia at All For Dreams Travel for a free quote! Her services are free, and she can help you with all of the details for your upcoming trip!

I am a Disney-loving former second grade teacher turned stay at home mom of two kids whom I homeschool and the wife of a Disney-tolerating husband. (But I think I am slowly starting to convert him!) If I'm not at Walt Disney World, you can probably find me planning my next Disney vacation or day-dreaming about being in the Magic Kingdom. I also love monograms, reading, Sonic Cherry Limeade's, autumn, and teaching kid's church.