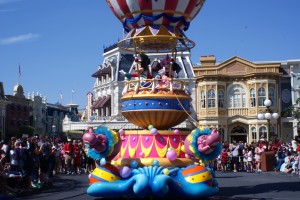 I did it, I camped out for two hours (with friends of course) on the corner outside of the Town Square Theatre on March 9, 2014. Why did I do this, you ask? BECAUSE…March 9, 2014 was the official world premiere of the Festival of Fantasy Parade at the Magic Kingdom in Walt Disney World! And let me tell you…it did not disappoint. It was absolutely amazing and was made of pure Disney magic! 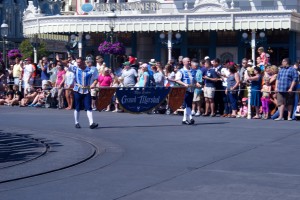 The floats are some of the most creative and colorful that Disney has ever had. It will be rolling out every day (weather permitting) at 3 pm as it is the replacement for the Celebrate a Dream Come True which retired on January 4, 2014. The new parade is even better than the old one, as though anyone thought that would be possible! There are a lot of photos in this article as I think only photos could do the performance justice, though they will be sort of teaser photos so I don’t give away too much. 😉 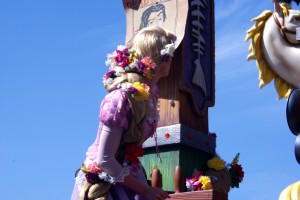 This is so much more than an ordinary day parade at Disney. It is truly a festival of fantasy, as the name would suggest. It is a show that happens along a parade route. It takes you back into the stories of all your favorite Disney classics. The first float to step off is the princess float…which stars not only some of our favorite classic princesses, but two of our favorite new ones as well. Anna, Elsa and Olaf make a lovely appearance on the opening float. Mickey and Minnie provide a fantastic finale! In between a fantastical group of characters make an appearance. There is a float for Rapunzel, one for Merida, one for Pinocchio, one for Peter Pan and Tinkerbell, one for Ariel and her sea friends. In between the floats are dancers corresponding to each float the their dances and costumes are nothing short of amazing. Right in the middle of all the magic, is a dragon who is quite upset that she was not invited and an epic battle between the dragon Maleficent and Prince Phillip ensues. 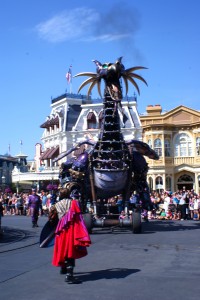 No matter what your favorite movie or character, I expect that everyone can find a favorite character in this parade. It has so many! The ones on the ground often interact with guests during the course of the parade. 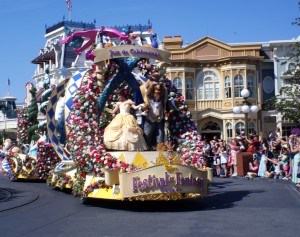 My tips for everyone during the parade are to definitely get a seat early, and have your cameras ready! I know these sound simple, but to get a truly amazing seat/view, you have to get to a spot at least an hour early. This will probably be true for a while because of the hype surrounding the parade right now.  There is a fast pass for this parade…I wouldn’t do it personally, because I like using my fast passes for attractions, but it has fast pass plus viewing by the partners statue of Walt and Mickey. Also, be prepared for the mass exodus after the parade-, lots of pass holders are coming just for the parade. I suggest having a snack in case the kids get restless. It should also be noted that the parade starts  in Frontierland near Splash Mountain and ends on Main Street USA. The parade floats are so heavy that they cannot go uphill, so they have to do a reverse step off…every time, it will probably never step off from Main Street since Main Street to Splash Mountain is uphill. Enjoy the photos and when you come to the WDW resort… do  not miss this parade! 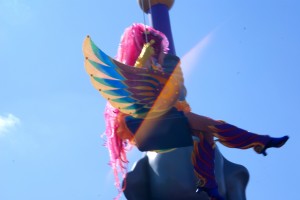