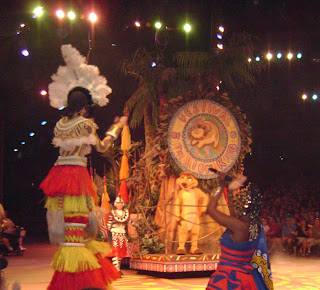 Animal Kingdom is a unique park that offers different adventure and thrills.  The animals, lush green trees and brush give you the feeling of being in the jungle.  When you add in a train ride, an African safari, and thrilling rides like : Kali River Rapids Expedition Everest, and Dinosaur, you already have enough excitement for one dayBut the one exciting and thrilling attraction you cannot missed all ages and heights can enjoy. And that is the Festival of the Lion King!

Currently this show is located in Camp Mickey at Animal Kingdom, but there is reports that they will be moving the show to Africa section of the park once Disney decides HOW it’s going to work the movie Avatar into the park.

When you come into Animal Kingdom make sure you get a park-guide. It will be able to tell you the times of the Festival of the Lion King shows.

You will want get to the show early to get in line for two reasons:
1) If you have young kids you will want get a really good seat. Ideally you want to get up front or the first three rows behind front row on an EDGE. If behind row one get on one of the ends and put your young one on the end at least. This gives them a chance to be “chosen” to participate in the show.

2) You want to place yourself where you can get the best view for the show and photo and video shots. The farther back you are the more heads you have between you and the really cool photo ops

In 2009 when we made our first trip to Animal Kingdom. At that time my son was 9 and my daughter was 6. Our seats were about 3 rows up from the front.  I was on the end then my daughter,son, and their mom. As the show started about 15 min into the 30 minute show kids were picked by cast members to participate in the show. My daughter was picked!!! She got to parade around and dance in the show and was the last one off after Timon walked up to her at the end of the Hakuna Matata song and pointed to her and “YOU ” at the end of the song.  She got escorted back with a huge smile !!!! 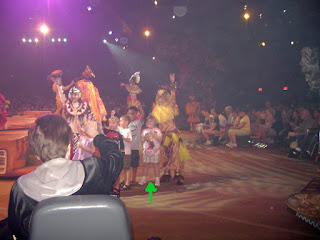 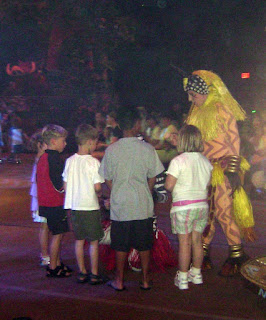 My daughter in the white shirt, plaid shorts to the right, after she just got picked; and above the green arrow in above picture, as the kids where parading around.

Festival of the Lion King is Animal Kingdom’s longest running live attraction. It opened in April of 1998.  The show does not follow the movie, but has bits and pieces added that will be familiar. The singers and dancers do an awesome job and the music just great as Disney never disappoints for any of their performances. It has a definite cirque du soleil feel if you’ve ever seen that. 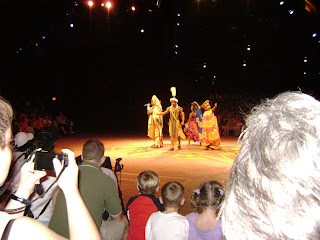 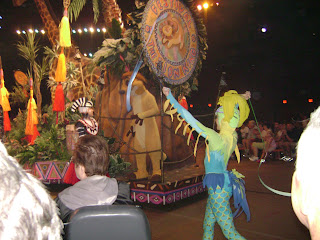 A few of the performers of the show.

Timon working the crowd and a cast member ribbon dancing.

For a exciting and entertaining musical that does not disappoint , check out Festival of the Lion King the next time you are at Animal Kingdom.  It is a little dark and sometimes the volume may scare children, but overall the show is extremely child friendly 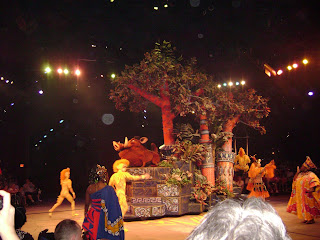