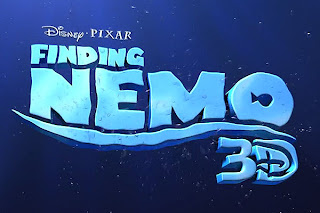 Yesterday we had the opportunity to take our children, 5yrs and 10yrs to see Finding Nemo 3D. As passionate lovers of the movie we were… to put it mildly… THRILLED at the opportunity for our KIDS to see it on the big screen.

The first time I remember seeing my husband cry (other than our wedding) was when we went out on a date to see Finding Nemo. Our first child was tiny… maybe like 3 months old when we saw it and when Marlin holds Nemo the egg and promises to “never let anything happen to him” the tears were flowing. Its a special movie for us and for parents everywhere.

So, lets talk 3D… is it really all that different? YES! Man I noticed SO MUCH MORE in 3D of  movie I’ve seen about 3.4 zillion times, but let’s start with the previews.

Besides getting EVEN MORE of the exciting Wreck it Ralph (coming out Nov 1) story then I’ve seen in any other preview, which I’m extremely PUMPED to see, another movie called the Rise of the Guardians (of Childhood) was previewed.

This is a Dreamworks production, but I am, none the less, SO EXCITED to see this film. Just to give you a taste, the Tooth Fairy, Easter Bunny, Sandman, and Santa have bound together to fight the one thing out to destroy childhood…. FEAR. And they need rambunctious Jack Frost’s help to make it happen. I’m not only excited about the beautiful animation, but the idea behind this movie I think is A-MAZING! Its scheduled to release to theaters Nov. 21, 2012. I think we will ALL enjoy it.

Pixar Short
I’m almost as thrilled to see the Pixar shorts before the Disney movies now as I am anything and this new one, Partysaurus Rex, does NOT DISAPPOINT. You can enjoy a little sneak-peak of it here! My kids and I laughed our heads off!

The Movie
There were times when I literally felt like I was scubadiving. The 3D and the coral shots designed in the movie originally jumped off the screen and you felt like you were below the sea in ways you never have before. And while inside the whale you practically feel yourself rocking back and forth with Dori in the tide.

Perhaps most impressive to me were shots from inside the tank when you could see things like fingerprints on the glass and corners of the take and slight distortion when looking out which I have NEVER noticed. Including the scuba diver IN the tank, which I’ve never ever noticed before.

We still laughed, cried, and screamed our way through the same old Nemo, but seeing it in theaters is, in my opinion, TOTALLY WORTH IT. Everyone applauded loudly when the film was over.

Now, side notes, because its 3D the shark teeth seem a little sharper, the explosion a little bigger, and the angler fish just a little more intense. While they never “come out at you” like many movies use 3D gags for the audience, it could be just a little intense. You know your own children though and for most of them, just readying them for it (since they’ve likely seen the movie before at home) might be enough.

I loved it! I highly recommend that you pony up the movie for another chance to MARVEL and how technology allows us to experience stories like never before! You’ll love Nemo even more than before!