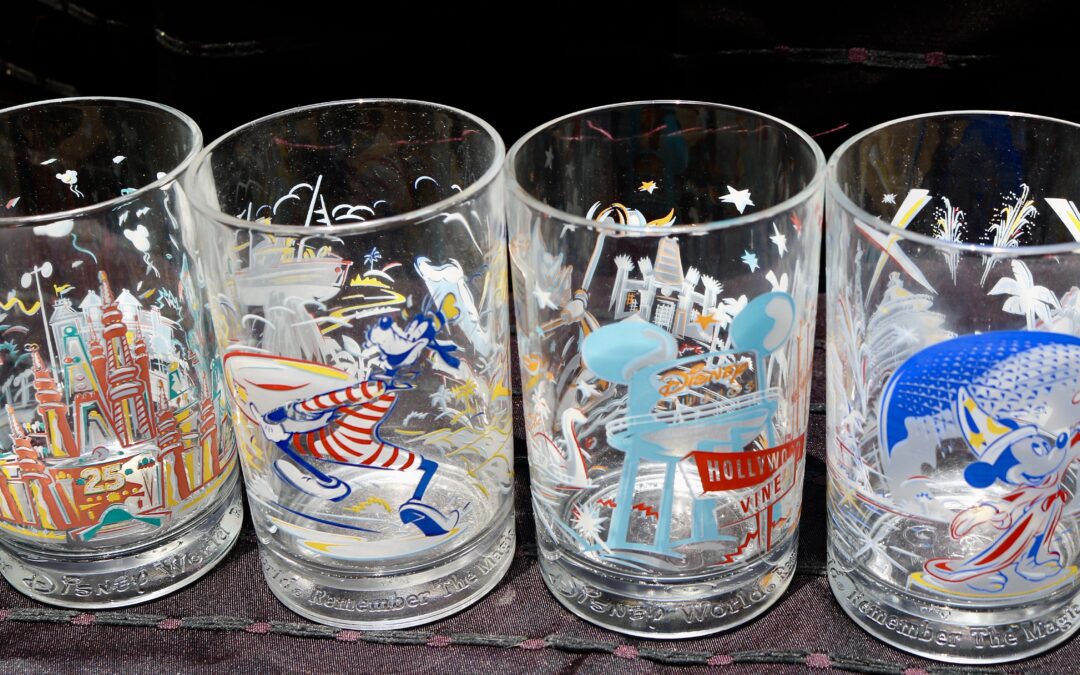 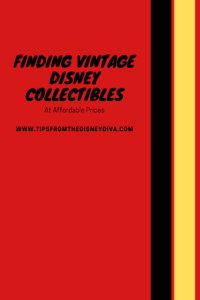 If you are of a certain age, you will probably remember the days when fast food restaurants such as McDonalds and Burger King would help promote Disney movies by selling cups or glasses that were themed after these movies.  I’ve mentioned before that the original animated Aladdin movie will always be my favorite because my first date with my husband was going to see Aladdin when it was released.  Because of that, I still have the plastic Aladdin cup that I vividly remember purchasing at a drive through window of our local Burger King. I also have a Pinocchio cup from the same Burger King series.

I believe there were nine cups in that particular series, and I’m sure at one point I had more than two of those nine. Unfortunately; those were released in 1994 I believe, and I have married and moved house a couple of times since then, so I am now the owner of only two cups.  Both of these cups have been used…a LOT, and washed a lot, which means the paint on them has suffered a little wear and tear, so they aren’t in the best shape.

Last year, my husband had a few days off of work and we were looking for something to do.  My oldest son had recently gotten into collecting vinyls, so I suggested going out to some local stores to see if anyone carried any vintage vinyls our son might be interested in.  We struck out at the first store we went to, but they suggested our local antique store, so off we headed.

As we started wandering through, picking through various items, we came to discover that antique stores are, apparently, great resources for finding vintage Disney collectible items.  We didn’t find any of the plastic Burger King cups to add to my collection, but we did find glassware sets that were Walt Disney World Park specific.

We found plenty of other Disney related items, books, VHS movies, a few toys that honestly wouldn’t be worth much at all, some books that came with records that I’m still mulling over going back to purchase, but at the moment, we were only interested in these glassware sets.  We found some in several different booths at the antique store, so we were able to “price compare” to get the lowest priced glasses.  It also just so happened that a sale was running, so we got a bit more of a discount on our purchases.  Each glass ran between $3.50 – $5.00 before the discount was applied.  Honestly, you may be able to buy them off of Ebay for a little cheaper, I’m not sure, but at least we were guaranteed that these were in perfect condition and would remain that way in the transfer to our home.

Now let’s move on to which goodies we actually came away with from the store. 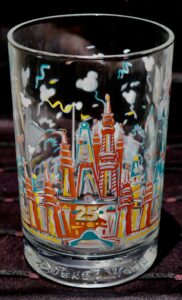 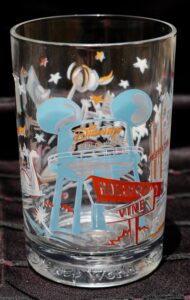 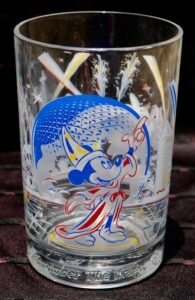 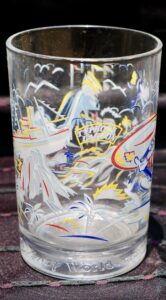 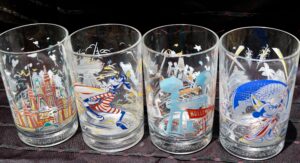 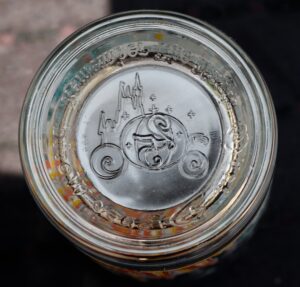 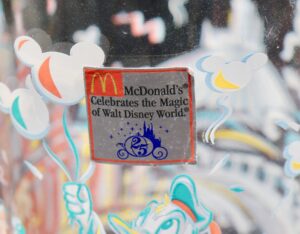 Our first new to us collection is the “Walt Disney World Remember the Magic 25th Anniversary” glasses.  From the sticker that is still attached to a couple of the glasses from the set we purchased, these came from McDonalds. It appears these were released by Walt Disney World and McDonalds in 1996.  There are four glasses in the set, Magic Kingdom, Hollywood Studios, Epcot and Typhoon Lagoon/Blizzard Beach. The Magic Kingdom glass even features that pink birthday cake overlay on the castle that so many remember.  Of course there’s no Animal Kingdom glass since Animal Kingdom didn’t open until 1998, two years after this set was released.  I love that the Hollywood Studios glass features the Earful Tower on it!  Each glass has different features from the parks painted on them which are easily recognizable and, thrilling to us, they are in pristine condition. 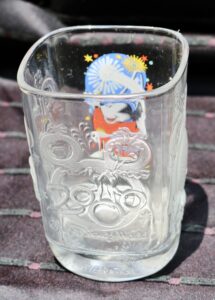 Side of Millennial Glass from Walt Disney World 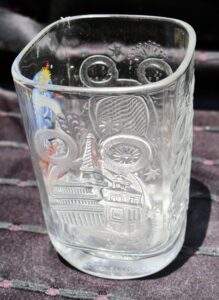 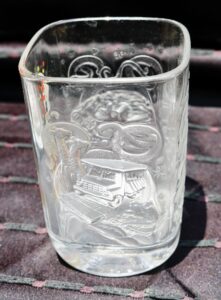 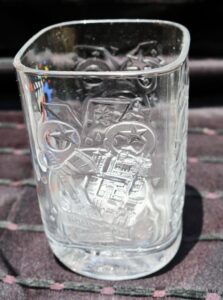 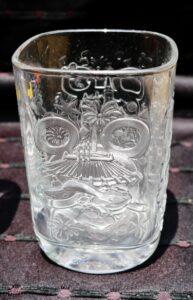 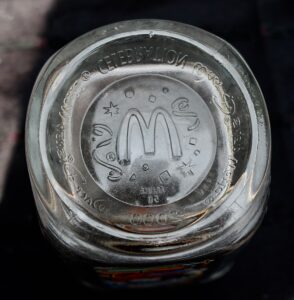 Our second collection is also a collection from McDonald’s.  It was released in 2000 and from what I can find, are just called the Disney Millennium Glasses.  These are also specific to Walt Disney World Parks.  It’s a set of four square shaped glasses.  The front of each one has a painted picture of Mickey Mouse in a park specific costume, while the sides have pictures raised in the glass that also features scenes and attractions from each of the four parks.  Since these were released in 2000, this set does have an Animal Kingdom glass as well as Magic Kingdom, Hollywood Studios and Epcot.  Again, we were thrilled to find these in pristine condition, unlike the poor two plastic glasses I had from years before. 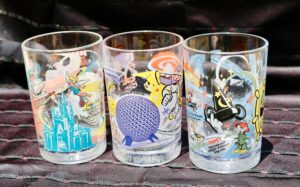 Three of the Share a Dream Come True glasses 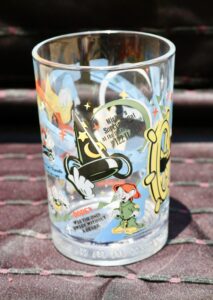 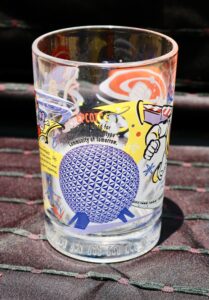 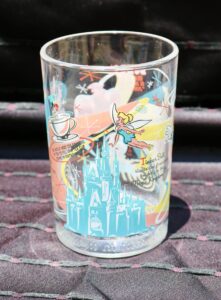 My last collection I will feature is actually one that I purchased myself at McDonald’s when they were first released, so they didn’t come from an antique store, but definitely deserve to be featured.  This set, I believe, is called the “Walt Disney World Share A Dream Come True” and it celebrates 100 years of Disney Magic.  This set features four glasses which are, again, Walt Disney World Parks specific.  Sadly, it appears that I collected only three out of the four, so I am still on the lookout for the final glass to complete my collection.  I do have the Magic Kingdom, Epcot and Hollywood Studios glasses, but I need to find the Animal Kingdom glass to finish this set.  I am proud of the fact that, unlike the fate of my plastic Burger King glasses, I somehow managed to keep these three in pristine condition from the time of purchase. This has more to do with the fact that I apparently stuffed them way back in a cabinet and forgot about them until purchasing these other sets triggered my foggy brain and I went on a search to find them.  Regardless of why they are still perfect, they are flaw free and I take full credit for that.  This set, as the others, features painted Disney characters and scenes that are park specific on each one.

Do you have any vintage Disney items you have been lucky enough to find unexpectedly?  If so, we would love to hear about what you found and where you found it, let us know in the comments.  If not and you are interested in starting your vintage collection, check out those antique stores, thrift stores and even yard sales (even though I don’t like getting up early enough to hit yard sales).