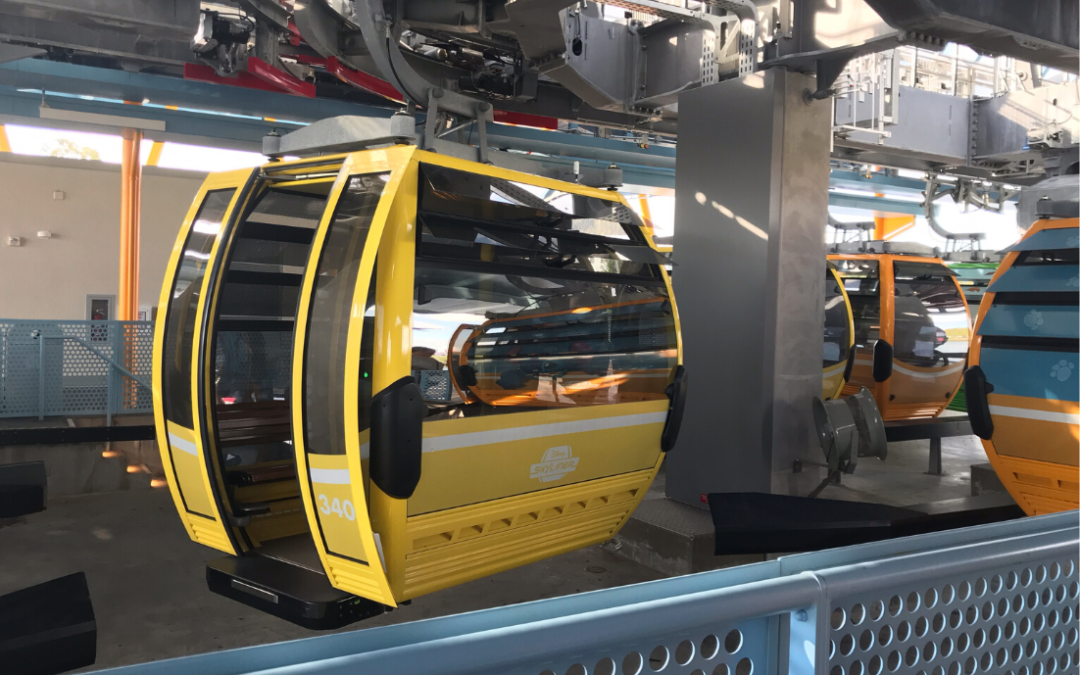 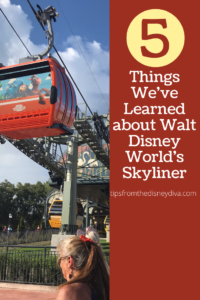 It was years in the making, months of testing, and finally, in late September 2019 Disney’s Skyliner transportation system opened.  As a testament to its popularity, in just over a month of operations, the Skyliner transported over a million guests!  But as you may have heard, there have also been dismal failures.  After less than a week of operation, it suffered an “accident” where thankfully no one was seriously injured, but many guests were left stranded for hours.

On our last visit to Walt Disney World, we purposely chose Pop Century Resort so we could use the Skyliner.  We had waited for so many months and watched the construction and were excited to try this new “magical flight” mode of transportation.

First, it’s important to know where the Skyliner travels.  It’s not from all resorts or to all parks.  The Disney Skyliner travels from four resorts: Disney’s Caribbean Beach, Disney’s Riveria Resort, Disney’s Pop Century Resort and Disney’s Art of Animation Resort.  There are, however, only 3 resort stations because Art of Animation and Pop Century share a Skyliner station (located on the bridge between the 2 resorts). The station at Caribbean Beach serves as a hub, and you can transfer from one line to another there.  The station at Riveria is expected to open when the resort opens in December 2019. For now the Skyliner does not stop at that station; rather, it just glides on through to the next stop.

As for parks, both Epcot and Hollywood Studios offer Skyliner transportation.  The Epcot station is near the International Gateway near World Showcase.  Keep this in mind if you choose to use the Skyliner to travel to Epcot. If you’re in a rush for a Soarin’ FastPass, for instance, you may be better off taking a bus so you enter at the front of the park.

With that quick background about the Skyliner, here’s what we learned. 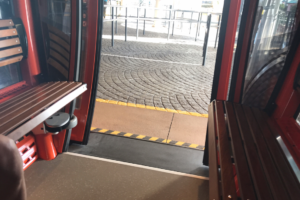 Loading and unloading from the Skyliner is a breeze.  The platform you stand on is at the same height as the gondola floor, so it’s super easy to step on and off. Have a stroller?  No need to fold it up! Just roll on and go!  Inside the gondola, there are benches on both sides.  You can choose to ride either facing forward or facing backward, similar to riding the PeopleMover in Magic Kingdom. 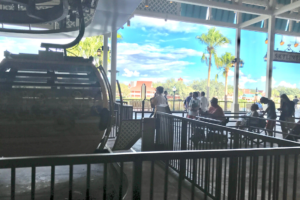 There is a separate line for wheelchairs and EVCs.  When we transferred at the Caribbean Beach station, we noticed there was a separate loading zone for guests in wheelchairs and EVCs. If you are using such a mobility device, look for the special loading zone.  Cast members can pull a gondola off the line to allow you more time to load, then they can send your gondola back to the regular sequence. 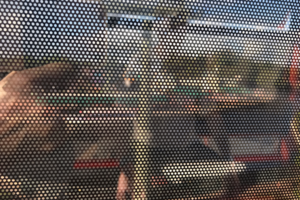 The view from a wrapped gondola

The wrapped gondolas are cute but don’t give great views.  We were so excited to get a super cute Toy Story gondola, but then a little disappointed that the view was somewhat obstructed from the decorative wrap.  We also had a chance to ride in an unwrapped gondola, and the views were remarkably clearer.

The views include a lot of backstage time.  But don’t get super excited about seeing spectacular views.  Much of what you see from the gondola (at least from Pop Century to Epcot) is backstage.  Parking lots. Roads. Warehouses. And underneath you is a gravel (or maybe it was paved – it’s hard to tell from up high) road/pathway.  I’m certain this is a safety precaution so in the event of an emergency evacuation rescue vehicles can reach you, but it really was a surprise and makes for a disappointing view.  Of course, there are some nice views – we flew over Hourglass Lake and the rooftops of Caribbean Beach Resort – but much of it is less than impressive.

There are emergency buttons and provisions in each gondola. As far too many people learned firsthand, there is an emergency call button in the gondola.  There’s also, we discovered from those who were stranded in the September accident, an emergency provision kit with water, cups, cool packs, a whistle, glow stick, and paper and pencil. (There were many complaints about these provisions – perhaps Disney will change their contents.) No one expects to be stranded for hours, but if you have anxiety about heights, confined places, or a health condition that would make it difficult for you to be stranded, you may want to reconsider using the gondolas.  I know the thought of being stuck there for hours with small children would concern me!

So, what’s your opinion?  The Disney Skyliner seems to elicit strong opinions from many people – what’s yours?  Will you be riding?

Remember, whichever mode of transportation you choose to use around the parks, Patricia at All for Dreams Travel can help plan a magical trip!  Contact her for a FREE quote!