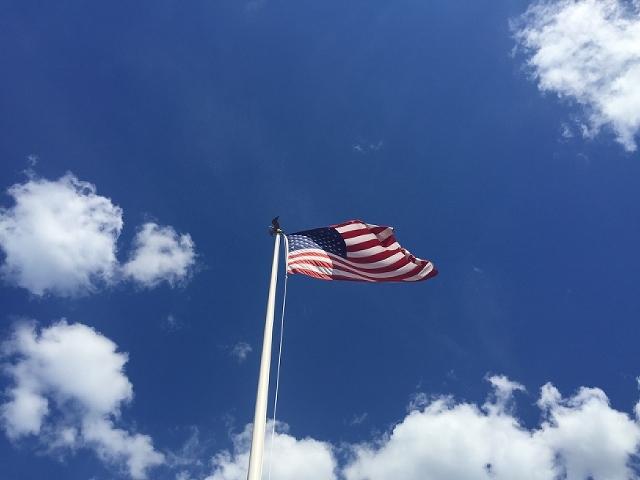 Recently, my husband hit 10 years of service in the United States Air Force.  We have been all over the United States, but are lucky enough to call Florida home at the moment.  My husband isn’t really into big ceremonies or being singled out for his service.  He is proud to serve, but doesn’t feel he needs the attention for doing his job. 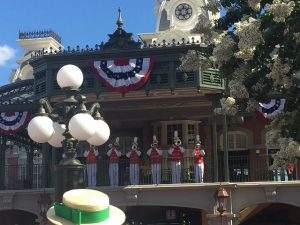 I did my research and found out that everyday at 5:00pm they do retreat and give the flag to a veteran or active duty individual.  The Flag Retreat is one of the longest standing traditions at Magic Kingdom.  As a military family, it’s nice to see that not only does Magic Kingdom does special discounts, but they take the time to honor them with the Flag Retreat. 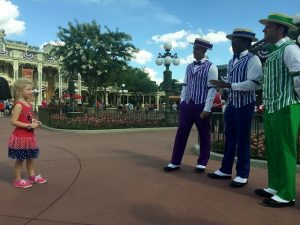 Talking to the Dapper Dans

The veteran is picked by a cast member at some point during the day.  I picked a weekday near Memorial Day since it was close to his 10 year anniversary date and hoped we could make it work.  I dressed the kids in their red, white and blue Mickey and Minnie outfits and even found an Air Force t-shirt at Target.  The cast members pick someone out by either having conversations with guests, seeing someone with military associated items on (veteran hats, pins, shirts, that kind of thing).  I knew we would be arriving early afternoon and hoped for the best.

I went over to City Hall hoping they hadn’t picked anyone yet.  I knew it was a long shot.  You can’t make magic happen for you- sometimes you get lucky, but it can’t be forced.  I found out they had already picked someone and ended up getting him a celebratory button for his 10 years of service.  (Which, by the way, he refused to wear.) 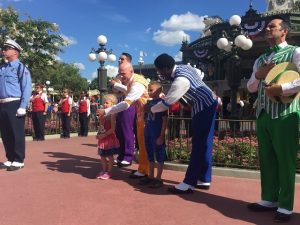 Leading the Pledge of Allegiance

Around 4:30 we were back up to the front of the park.  Memorial Day was the following Monday, so it was a nice reminder to go into the weekend being thankful.  While we were waiting one of the Dapper Dans came over to see if our daughter knew the Pledge of Allegiance.  She proudly rattled it off to him.  She was then invited to be a part of the ceremony and lead the Pledge of Allegiance.  If you have an elementary aged kid and are around before the ceremony starts they may be able to be involved.  There was only one other little boy around to help with the Pledge.

The ceremony starts with the band and cast members around the train platform down through the flag area.  After the band plays the Dapper Dans and the kids start the Pledge of Allegiance.  We were very proud of our daughter for knowing and saying the pledge in front of everyone. 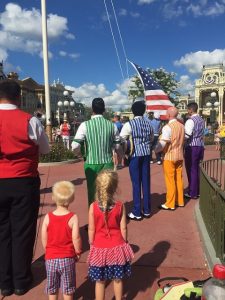 The flag is lowered and presented to a service member.  In this case it was a husband and wife team who both serve.  He is in the Navy and she is Air Force.  They were marched off after the ceremony so we were unable to talk to them, but I wanted to give them a big THANK YOU shout out.  It’s tough enough with one family member serving, but two in two different branches is amazing.  Your family rocks!

The band plays the medley of all branches of service and the Dapper Dans sing God Bless America. There is a short procession down Main Street and the ceremony is over.  It takes about 15 minutes, but is well worth the time to watch. 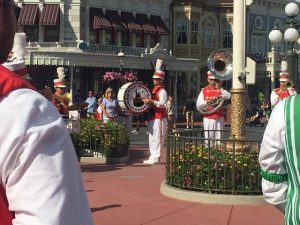