For The First Time In Forever: A Frozen Sing-Along Celebration From a Male Teen’s Point of View 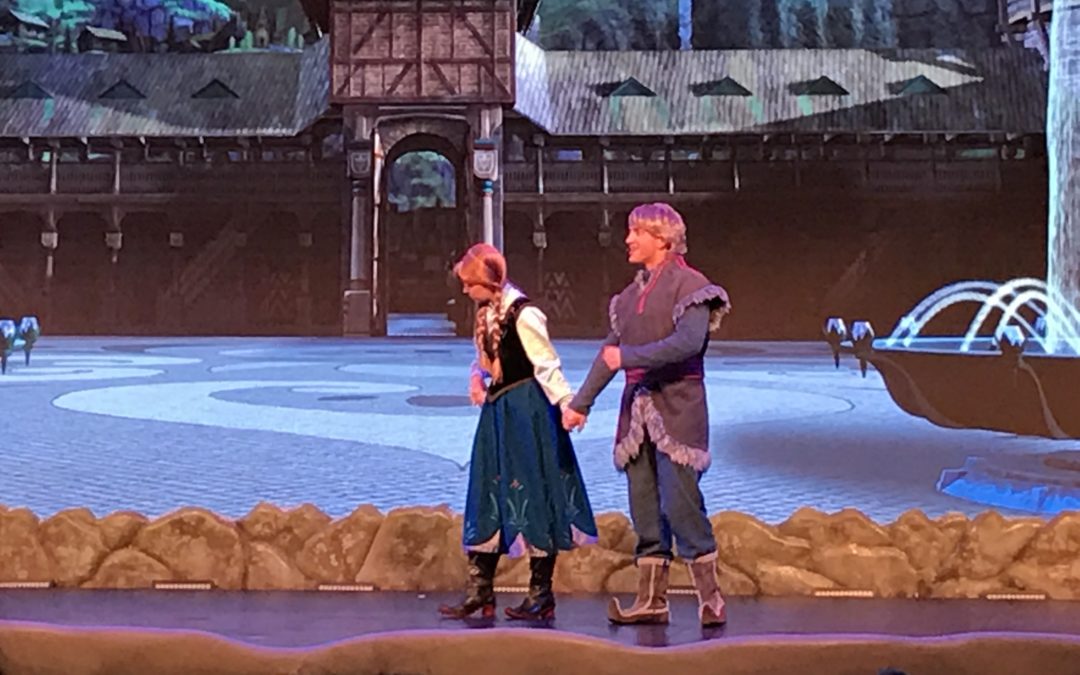 Yes, you read the title correctly, this is a review of For The First Time In Forever: A Frozen Sing-Along from a Male Teen’s Point of View. I’ll be honest, in previous visits to Disney’s Hollywood Studios, our family has bypassed this particular attraction without a second glance, much less a second thought. Wasn’t Frozen more for little girls than for my teenage boys, or even for us, their parents? As we were wrapping up our last day at Hollywood Studios on a previous visit, we were hitting Toy Story Midway Mania one last time. We were standing in line, joking around with each other, and I started teasing my kids, telling them that next we were going to hit the Frozen Sing-Along, just to jar a reaction from them. I got the usual groans and moans, but then a gentleman in front of us turned around and addressed us.

He told us that it was actually a very good show.  I was skeptical, and told him we were just kidding, because of them being guys and their ages, but he assured us again that it was well worth our time.  We didn’t make it that visit, but his comments stayed with me.  Was I being unfair by not giving it a chance?  Wasn’t I the one who always says people need to try every attraction at least once?  So what if the audience was filled with five-year old girls, it’s Walt Disney World, maybe we should just bite the bullet and give it a shot.  A few months later I was talking to some friends who also like to visit Walt Disney World.  They asked if we had been to the Sing-Along, and I told them no, not yet.  They were very adamant that we absolutely HAD to go; it was a very good show, and very funny as well. 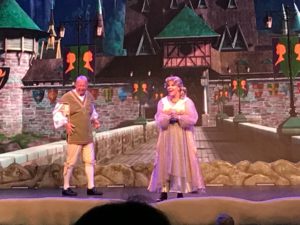 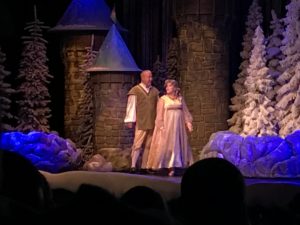 We decided on our next trip we were going to work it into our plans, and so we did.  Can I just say…this show is not merely “funny”, this show is HILARIOUS!!!  Notice all the capital letters in the previous word?  That’s because I really, seriously mean it.  The show begins with a flustered Princess Anna coming out on stage without her sister, Queen Elsa (I clarify as if the entire world doesn’t know who Anna and Elsa are already) who is missing.  Anna calls out the Royal Historians of Arendelle, Eric and Aria, and informs them that they are to tell the audience the history of Arendelle, where she then makes her exit. 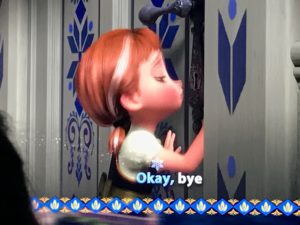 Eric and Aria absolute make the show!  They are loud, boisterous and amazingly funny.  They begin their storytelling, basically a synopsis of the movie Frozen.  Clips and Scenes from the musical portions of the movie are shown on large screens for the audience to see, as well as read the lyrics so they can sing along (duh!  It’s called a Frozen Sing-Along, of course you can sing along).  I was a little surprised that more of the children in the audience we were part of weren’t singing, I think they were just too enthralled with the events taking place, but the most surprising part was the fact that my two teenage sons WERE singing with the songs.  Not just singing, but having a blast doing it.  They were laughing, singing and having an absolutely great time! 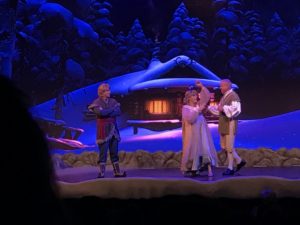 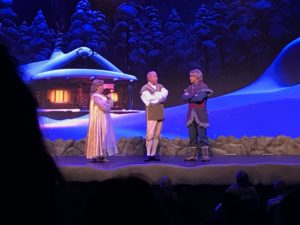 An appearance is made by Kristoff, with more hilarious interaction with Eric and Aria to keep those of us over the age of ten amused and happy.  Yes, the story is about Anna, Elsa, and all the other Frozen characters, but the true stars of this sing-along are Eric and Aria.  More songs are sung, with exaggerated flamboyance by Eric and Aria, and Anna makes another appearance to join Kristoff. 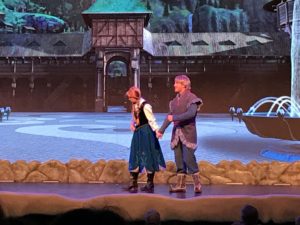 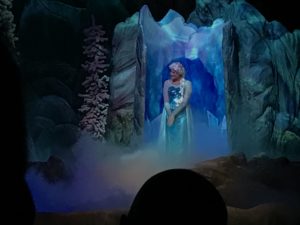 Finally, toward the end of the show, Queen Elsa makes her appearance, in all the drama that Queen Elsa requires.  Anna pulls her out on stage, where more singing is done.  You didn’t think we could have a Frozen sing-along without the song “Let It Go” did you? 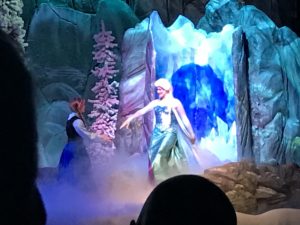 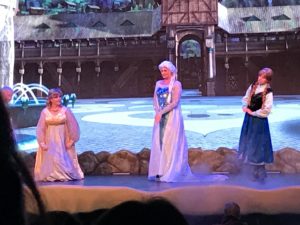 By the end of the sing-along, the entire audience is named Honorary Citizens of Arendelle, and more singing takes place.  While the last song is being sung, that Disney magic kicks in, and snow begins to fall heavily from the “sky”.  The children were thrilled and enchanted. 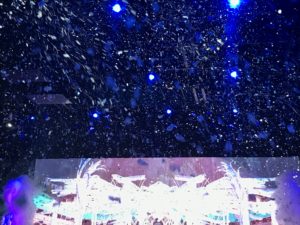 Since it was our first time going, there’s really only one DIVA TIP I can offer you:  Before entering the theater, everyone has to wait out in a large room for the doors to open.  There where three or four sets of doors.  Most people crowd around the first set, toward the bottom of the theater, in an effort to get closer to the stage.  The tip we heard, just a little too late, was to actually enter from the top of the theater at the last set of doors.  It seems there’s usually a traffic jam to get into that bottom first set of doors.  By entering from the top set, you can quickly make your way to a closer seat to the stage.

So, how did my teen sons like it?  Was it worth it to go, even if we don’t have any girls (I don’t think mom counts as a girl in a male dominated household)?  They LOVED it.  It was an absolute riot.  The one-liners were delivered so quickly and cleverly, it was brilliant.  As I said, they even sang loud and proud with all of the songs.  Would I recommend any other teenage boy go see it?  I would recommend EVERYONE go see it, young, old, in between, male, female, whoever it may be.  Go.  See.  It.  I promise you won’t be sorry.  I know we will definitely go back to see it again!