Get Prehistoric at Donalds Dino-Bash! 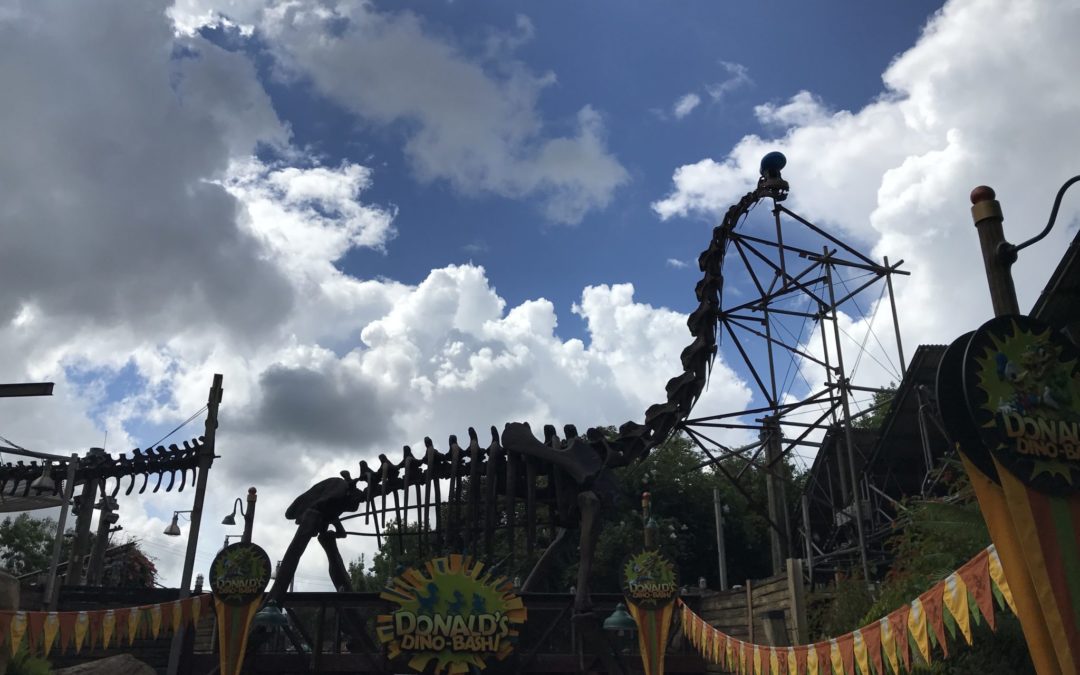 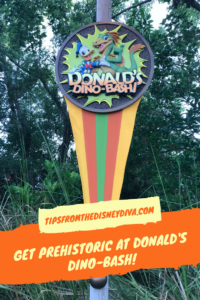 Donald Duck has recently learned he descends from dinosaurs!  Lucky for us, Donald has decided to celebrate his new-found heritage at DinoLand, USA in Animal Kingdom.  He has even enlisted a few friends to come party with him! 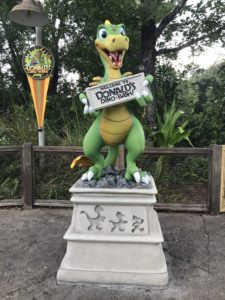 DinoLand USA is located in Animal Kingdom to the left of Discovery Island.  After you walk under the  giant Brachiosaurus (notice he’s wearing Donald’s famous blue cap) you are taken back in time.  Donald has decorated Dino-Land for his Dino-Bash. 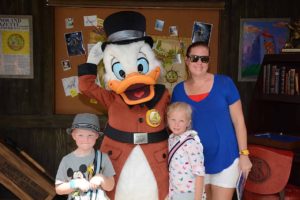 Scrooge McDuck is in DinoLand for the summer. 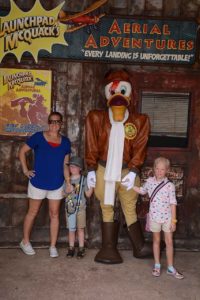 Launchpad McQuack! He is an Ultra Rare Character, so meet him while you can!

During the day Donald invited his friends out to meet guests.  Donald is wearing his new Dino-Bash attire. Goofy is in his checkered shirt and Pluto is playing in The Boneyard.  Daisy has a cute spot on the same trail as Chip n Dale.  Donald’s Uncle Scrooge and friend Launchpad McQuack are also out for the Dino-Bash. 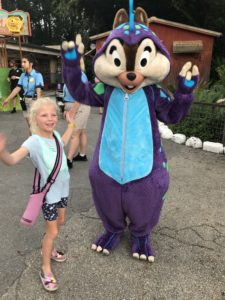 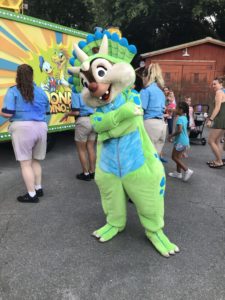 Chip and Dale are usually causing trouble for Donald, but they decided to help him celebrate instead.  Chip is dressed as a purple stegosaurus.  Dale is dressed as a green triceratops.  They both have a meet and greet on the same path as Daisy in their dinosaur costumes. 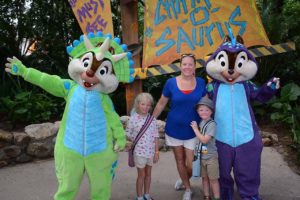 Chip ‘n Dale meet just down the path from Daisy and at the Dance Party in the evening.

The characters are only out until around 5:30pm each day.  The first night we went, we were a little too late to meet the characters.  We went back a second morning as was able to meet everyone with very little wait times.  Launchpad McQuack’s line closes fast, so be sure to get there early.  Once the dance party starts only Chip and Dale are out.  They stay in the dance area, not the meet and greet spot.  We were able to get a few shots with both Chip and Dale.  Donald does not come out to the dance party. 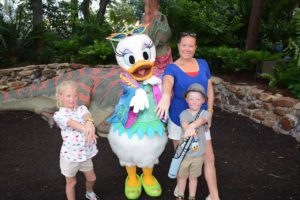 Daisy Duck looks elegant as always in her Dino-Bash outfit. 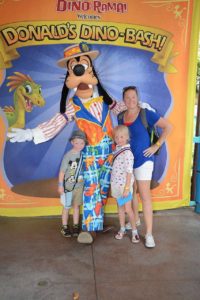 Check out Goofy’s Dino-Bash outfit! He is currently meeting near the Triceratop Spin Ride

The dance party starts around 4pm and goes until about 8pm.  The music is from every era and will get everyone dancing!  The DJ and Emcee were a lot of fun and kept the party going.  Feel free to bust a move and shake your tail feathers!

Besides the Dino-Bash there is plenty to do in Dino-Land.  Rides, attractions, and plenty of food options.  Be sure to check out Dino-Sue.  Dino Sue  is a replica of one of the greatest archeological finds of the 20th century with over 90% of her bones excavated by fossil hunter Sue-Hendrickson.  The replica Dino-Sue stand 13 feet high and 40 feet long. 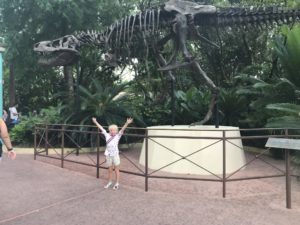 There are three rides, Triceratop Spin, Primeval Whirl, and Dinosaur. Triceratop Spin is a Dumbo-like ride that is fun for any age.  Primeval Whirl is a twisty, turny rollercoaster not for those with weak stomachs.  Dinosaur is an Enhanced Motion Vehicle ride for the those brave enough to go back in time and rescue an Iguanadon before a giant meteor hits Earth.  This ride is dark and has loud dinosaur sounds, so it may not be for those who get scared easily.

There is also Restaurantosaurus, Dino Diner, Dino-Bite Cafe, and Trilo-Bites if you get hungry.  Restaurantosaurus is a quick service restaurant with burgers, chicken nuggets, and the like in a paleontologist themed atmosphere.  Dino Diner is a fun old-time camping trailer where you can grab a quick snack of Italian sausage hoagie or churros with chocolate sauce. Dino-Bite Cafe serves up your favorite cool treats.  Cool down with an ice cream cookie sandwich, float, or hot fudge sundae.  Trilo-Bites is another counter service restaurant, but is currently closed for a remodel. 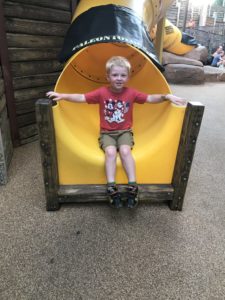 When you are too short for Primeval Whirl you get to spend extra time in The Boneyard. 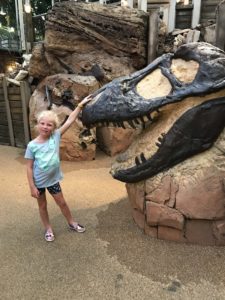 Checking out the skeletons in The Boneyard.

Kids will have a blast running off energy in the Boneyard.  The Boneyard is a paleontologists archeological dig with dinosaur skeletons, tunnels, slides, and a large climbing structure.  There is a small section, complete with small slide, for the youngest adventurers.  This is a great place to take little ones who are too small for Primeval Whirl and Dinosaur. 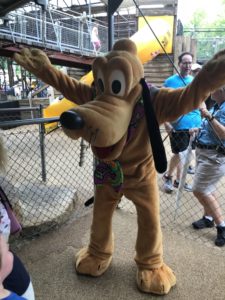 Pluto is hanging out in the Boneyard to play! He will occasionally stop for photos, but don’t expect it.

Dino-Land USA isn’t going anywhere soon, but Donald’s Dino-Bash will only be around for the Incredible summer.  Make sure you visit before the party goes extinct! 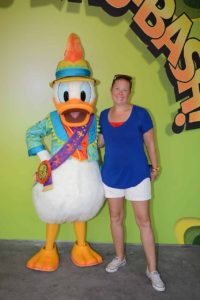